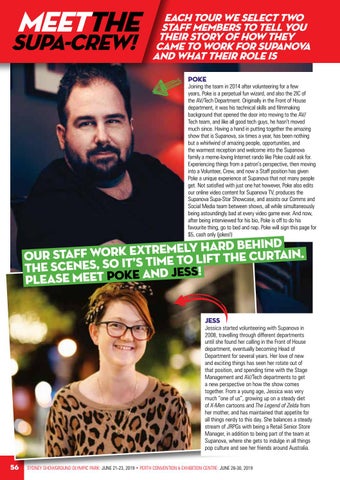 Joining the team in 2014 after volunteering for a few years, Poke is a perpetual fun wizard, and also the 2IC of the AV/Tech Department. Originally in the Front of House department, it was his technical skills and filmmaking background that opened the door into moving to the AV/ Tech team, and like all good tech guys, he hasn’t moved much since. Having a hand in putting together the amazing show that is Supanova, six times a year, has been nothing but a whirlwind of amazing people, opportunities, and the warmest reception and welcome into the Supanova family a meme-loving Internet rando like Poke could ask for. Experiencing things from a patron’s perspective, then moving into a Volunteer, Crew, and now a Staff position has given Poke a unique experience at Supanova that not many people get. Not satisfied with just one hat however, Poke also edits our online video content for Supanova TV, produces the Supanova Supa-Star Showcase, and assists our Comms and Social Media team between shows, all while simultaneously being astoundingly bad at every video game ever. And now, after being interviewed for his bio, Poke is off to do his favourite thing, go to bed and nap. Poke will sign this page for $5, cash only (jokes!)

Jessica started volunteering with Supanova in 2008, travelling through different departments until she found her calling in the Front of House department, eventually becoming Head of Department for several years. Her love of new and exciting things has seen her rotate out of that position, and spending time with the Stage Management and AV/Tech departments to get a new perspective on how the show comes together. From a young age, Jessica was very much “one of us”, growing up on a steady diet of X-Men cartoons and The Legend of Zelda from her mother, and has maintained that appetite for all things nerdy to this day. She balances a steady stream of JRPGs with being a Retail Senior Store Manager, in addition to being part of the team at Supanova, where she gets to indulge in all things pop culture and see her friends around Australia. 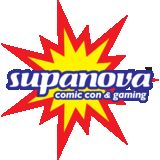