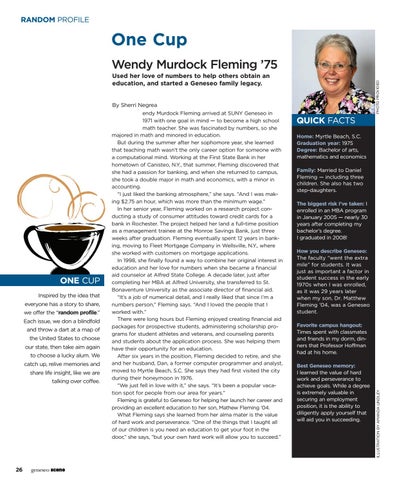 Used her love of numbers to help others obtain an education, and started a Geneseo family legacy.

ONE CUP Inspired by the idea that everyone has a story to share, we offer the “random profile.” Each issue, we don a blindfold and throw a dart at a map of the United States to choose our state, then take aim again to choose a lucky alum. We catch up, relive memories and share life insight, like we are talking over coffee.

QUICK FACTS Home: Myrtle Beach, S.C. Graduation year: 1975 Degree: Bachelor of arts, mathematics and economics Family: Married to Daniel Fleming — including three children. She also has two step-daughters. The biggest risk I’ve taken: I enrolled in an MBA program in January 2005 — nearly 30 years after completing my bachelor’s degree. I graduated in 2008! How you describe Geneseo: The faculty “went the extra mile” for students. It was just as important a factor in student success in the early 1970s when I was enrolled, as it was 29 years later when my son, Dr. Matthew Fleming ’04, was a Geneseo student. Favorite campus hangout: Times spent with classmates and friends in my dorm, dinners that Professor Hoffman had at his home. Best Geneseo memory: I learned the value of hard work and perseverance to achieve goals. While a degree is extremely valuable in securing an employment position, it is the ability to diligently apply yourself that will aid you in succeeding.

endy Murdock Fleming arrived at SUNY Geneseo in 1971 with one goal in mind — to become a high school math teacher. She was fascinated by numbers, so she majored in math and minored in education. But during the summer after her sophomore year, she learned that teaching math wasn’t the only career option for someone with a computational mind. Working at the First State Bank in her hometown of Canisteo, N.Y., that summer, Fleming discovered that she had a passion for banking, and when she returned to campus, she took a double major in math and economics, with a minor in accounting. “I just liked the banking atmosphere,” she says. “And I was making $2.75 an hour, which was more than the minimum wage.” In her senior year, Fleming worked on a research project conducting a study of consumer attitudes toward credit cards for a bank in Rochester. The project helped her land a full-time position as a management trainee at the Monroe Savings Bank, just three weeks after graduation. Fleming eventually spent 12 years in banking, moving to Fleet Mortgage Company in Wellsville, N.Y., where she worked with customers on mortgage applications. In 1998, she finally found a way to combine her original interest in education and her love for numbers when she became a financial aid counselor at Alfred State College. A decade later, just after completing her MBA at Alfred University, she transferred to St. Bonaventure University as the associate director of financial aid. “It’s a job of numerical detail, and I really liked that since I’m a numbers person,” Fleming says. “And I loved the people that I worked with.” There were long hours but Fleming enjoyed creating financial aid packages for prospective students, administering scholarship programs for student athletes and veterans, and counseling parents and students about the application process. She was helping them have their opportunity for an education. After six years in the position, Fleming decided to retire, and she and her husband, Dan, a former computer programmer and analyst, moved to Myrtle Beach, S.C. She says they had first visited the city during their honeymoon in 1976. “We just fell in love with it,” she says. “It’s been a popular vacation spot for people from our area for years.” Fleming is grateful to Geneseo for helping her launch her career and providing an excellent education to her son, Mathew Fleming ’04. What Fleming says she learned from her alma mater is the value of hard work and perseverance. “One of the things that I taught all of our children is you need an education to get your foot in the door,” she says, “but your own hard work will allow you to succeed.” 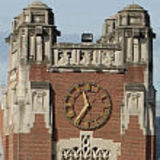 The State University of New York College at Geneseo magazine for alumni, faculty, staff and parents and friends.

The State University of New York College at Geneseo magazine for alumni, faculty, staff and parents and friends.