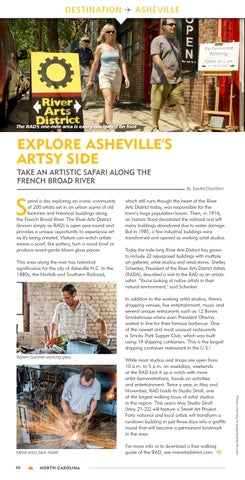 pend a day exploring an iconic community of 200 artists set in an urban scene of old factories and historical buildings along the French Broad River. The River Arts District (known simply as RAD) is open year-round and provides a unique opportunity to experience art as it's being created. Visitors can watch artists weave a scarf, fire pottery, turn a wood bowl or produce avant-garde blown glass pieces. This area along the river has historical significance for the city of Asheville N.C. In the 1880s, the Norfolk and Southern Railroad,

which still runs though the heart of the River Arts District today, was responsible for the townâ&#x20AC;&#x2122;s huge population boom. Then, in 1916, an historic flood devastated the railroad and left many buildings abandoned due to water damage. But in 1985, a few industrial buildings were transformed and opened as working artist studios. Today the mile-long River Arts District has grown to include 22 repurposed buildings with multiple art galleries, artist studios and retail stores. Shelley Schenker, President of the River Arts District Artists (RADA), described a visit to the RAD as an artistic safari. "You're looking at native artists in their natural environment," said Schenker. In addition to the working artist studios, there's shopping venues, live entertainment, music and several unique restaurants such as 12 Bones Smokehouse where even President Obama waited in line for their famous barbecue. One of the newest and most unusual restaurants is Smoky Park Supper Club, which was built using 19 shipping containers. This is the largest shipping container restaurant in the U.S.!

For more info or to download a free walking guide of the RAD, see riverartsdistrict.com.

While most studios and shops are open from 10 a.m. to 5 p.m. on weekdays, weekends at the RAD kick it up a notch with more artist demonstrations, hands-on activities and entertainment. Twice a year, in May and November, RAD holds its Studio Stroll, one of the largest walking tours of artist studios in the region. This year's May Studio Stroll (May 21-22) will feature a Street Art Project. Forty national and local artists will transform a rundown building in just three days into a graffiti mural that will become a permanent landmark in the area. 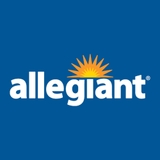 Rediscover St. Petersburg - A City of Reinvention and other Great Allegiant Destinations

Rediscover St. Petersburg - A City of Reinvention and other Great Allegiant Destinations