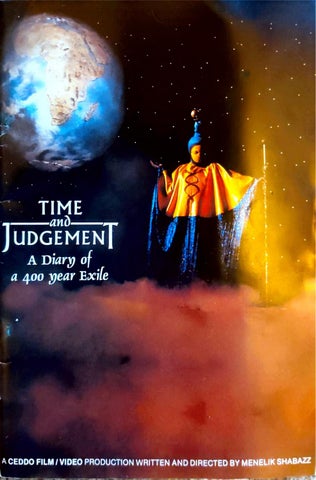 Time and Judgenment links biblical prophecy with the times we are

living in, leading towards the final confrontation between the heart and money. The heart

love and life, and money

Bridge through cight years: from Zimbabwe to South Africa, the Caribbean and the USA,

to Britain. The film also draws a parallel with the Italian fascism against Ethiopia (1935) and fascism in Southern Africa today, thus linking the past with the

The timely voices of King Haile Selassie, Kwame Ture, Walter and Farrakhan, connect the scattered voices of the African

The Queen of the South will rise up in Judgement with the men of this generation and condemn them; for she came from the ends of

the earth to hear the wisdom of Solomon; and behold, a greater than Solomon is here." (Luke 11:31)

This prophecy of Christ refers to Makeda the Queen of Sheba (Arabia) and Ethiopia who preceded Christ by 982 years. It refers to a future time. The Queen is symbolic of EthiopialAlrica that will rise up in Judgement. After 400 years of oppression the Israelites rose up with the rod of Moses and passed judgement against Pharoah in

Fypt. The Queen of the South is Ethiopia/Africa who will rise up and condemn

Babylon. Oucen JuÂŤlgement symbolises divine truth and righteousness, with the awesome power o punishment and gentility symbolized through the lion and the lamb. ln he judgement chamber Queen Judgement sits before the Scales of Justice. The heart is weighed against money. The heart, symbol of love and righteousness, is weak. Money, the symbol of greed, dominates. Planet carth has become captive to the god of oney. Qucen Judgement calls the Timekeeper (the recorder and keeper of carth's hislory) lo assist her in the final call (a warning) to the people of earth. The Timekeepxr is sent to carth and manifests through man, who after eight symbolic years l s o Queen Judgement, who in turn knows that earth needs divine assistance: l sends oul the tire of judgement against Babylon and stretches forth to raise and nylhon the heart.

"I heard the call of Time,

it may be a blessinp in disguise

diary of the things

have been physically separated from Africa. Looking out from London Bridge, a symbol of the middle passage and slave trade, the Diarist recounts the last eight years.

newly independent Zimbabwe and move through the years to Southern Africa, the Caribbean, the USA

events during these years. We (rejencounter Farrakhan,

Kwame Ture and Walter Rodney on our journey. The Diarist observes the signs of the fall of Babylon and the rise of truth and justice. Time and Judgement signifies the movement of time where events seem tO OCcur

However, the film shows that there is a continuity in the ex periences of Black people throughout the

world and in history. It asks the viewer to reflect ... to connect.

The Wall... Other dimensions are touched on in the use of dramatic sketches, poctry and music. They symbolise the day-lo-day struggle where the pressures of life get rough. The wall is symbolic as a recorder of history

and an immovable force in time, yet subject to change

lphone). elore this wall, individuals make pronouncements n the events of this time and we sce the attempts, ilher through technology or person to person conIontalion, of individuals attempting to resolve their

poblems. At the root is MONEY MONEY MONEY: bul we are 'Coming in from the Cold'.

lives and works in

ing Point for ATV Come i a l Television.

Based in the North London Borough of Haringey

which has a large Black population and strong

sense of community, the Norkshop offers a space where

diverse cultural backgrounds to produce Black images that are reflective of Black experiences. As well as Film and Video production, CEDDO is engaged in TRAINING EXHIBITION and EDUCA-

TIONAL activities. The courses are primarily

technical and provide a range of skills in film and video making.

Menelik has been involv-

l , as Producer on

The EXHIBITION and SEMINAR programmes are structured to encourage discussions on representation, cinema and general media practices. This forum has also been used to host seminar debates with independent filmmakers on contemporary Black cinema.

expression through visual arts. OBAALA founded and runs The Black-Art Gallery... (the nly one of its kind in Britain) This is the original programme booklet for 'Time and Judgement' directed by Menelik Shabazz containing synopsis and a explanation of the sym...

This is the original programme booklet for 'Time and Judgement' directed by Menelik Shabazz containing synopsis and a explanation of the sym...