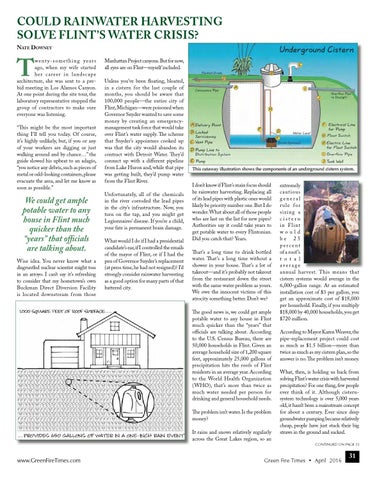 wenty-something years ago, when my wife started her c areer in landsc ape architecture, she was sent to a prebid meeting in Los Alamos Canyon. At one point during the site tour, the laboratory representative stopped the group of contractors to make sure everyone was listening. “This might be the most important thing I’ll tell you today. Of course, it’s highly unlikely, but, if you or any of your workers are digging or just walking around and by chance…” the guide slowed his upbeat to an adagio, “you notice any debris, such as pieces of metal or odd-looking containers, please evacuate the area, and let me know as soon as possible.”

We could get ample potable water to any house in Flint much quicker than the “years” that officials are talking about. Wise idea. You never know what a disgruntled nuclear scientist might toss in an arroyo. I can’t say it’s refreshing to consider that my hometown’s own Buckman Direct Diversion Facility is located downstream from those

Manhattan Project canyons. But for now, all eyes are on Flint—myself included. Unless you’ve been floating, bloated, in a cistern for the last couple of months, you should be aware that 100,000 people—the entire city of Flint, Michigan—were poisoned when Governor Snyder wanted to save some money by creating an emergencymanagement task force that would take over Flint’s water supply. The scheme that Snyder’s appointees cooked up was that the city would abandon its contract with Detroit Water. They’d connect up with a different pipeline from Lake Huron and, while that pipe was getting built, they’d pump water from the Flint River. Unfortunately, all of the chemicals in the river corroded the lead pipes in the city’s infrastructure. Now, you turn on the tap, and you might get Legionnaires’ disease. If you’re a child, your fate is permanent brain damage. What would I do if I had a presidential candidate’s ear, if I controlled the emails of the mayor of Flint, or if I had the pen of Governor Snyder’s replacement (at press time, he had not resigned)? I’d strongly consider rainwater harvesting as a good option for many parts of that battered city.

I don’t know if Flint’s main focus should be rainwater harvesting. Replacing all of its lead pipes with plastic ones would likely be priority number one. But I do wonder. What about all of those people who are last on the list for new pipes? Authorities say it could take years to get potable water to every Flintonian. Did you catch that? Years. That’s a long time to drink bottled water. That’s a long time without a shower in your house. That’s a lot of takeout—and it’s probably not takeout from the restaurant down the street with the same water problem as yours. We owe the innocent victims of this atrocity something better. Don’t we? The good news is, we could get ample potable water to any house in Flint much quicker than the “years” that officials are talking about. According to the U.S. Census Bureau, there are 50,000 households in Flint. Given an average household size of 1,200 square feet, approximately 25,000 gallons of precipitation hits the roofs of Flint residents in an average year. According to the World Health Organization (WHO), that’s more than twice as much water needed per person for drinking and general household needs. The problem isn’t water. Is the problem money? It rains and snows relatively regularly across the Great Lakes region, so an

extremely cautious general rule for sizing a cistern in F lint would be 25 percent of a roof ’s t o t a l average annual har vest. This means that cistern systems would average in the 6,000-gallon range. At an estimated installation cost of $3 per gallon, you get an approximate cost of $18,000 per household. Finally, if you multiply $18,000 by 40,000 households, you get $720 million. According to Mayor Karen Weaver, the pipe-replacement project could cost as much as $1.5 billion—more than twice as much as my cistern plan, so the answer is no. The problem isn’t money. What, then, is holding us back from solving Flint’s water crisis with harvested precipitation? For one thing, few people ever think of it. Although cisternsystem technology is over 5,000 years old, it hasn’t been a mainstream concept for about a century. Ever since deep groundwater pumping became relatively cheap, people have just stuck their big straws in the ground and sucked. continued on page 33 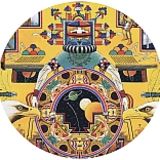