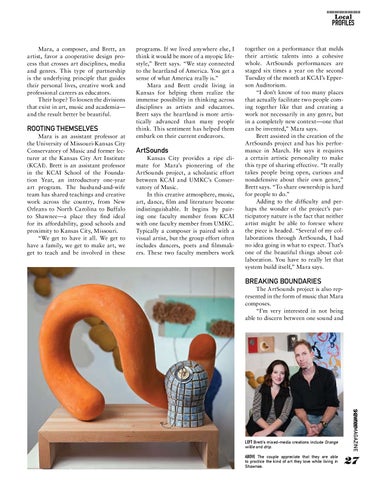 profiles Mara, a composer, and Brett, an artist, favor a cooperative design process that crosses art disciplines, media and genres. This type of partnership is the underlying principle that guides their personal lives, creative work and professional careers as educators. Their hope? To loosen the divisions that exist in art, music and academia— and the result better be beautiful.

Rooting themselves Mara is an assistant professor at the University of Missouri-Kansas City Conservatory of Music and former lecturer at the Kansas City Art Institute (KCAI). Brett is an assistant professor in the KCAI School of the Foundation Year, an introductory one-year art program. The husband-and-wife team has shared teachings and creative work across the country, from New Orleans to North Carolina to Buffalo to Shawnee—a place they find ideal for its affordability, good schools and proximity to Kansas City, Missouri. “We get to have it all. We get to have a family, we get to make art, we get to teach and be involved in these

programs. If we lived anywhere else, I think it would be more of a myopic lifestyle,” Brett says. “We stay connected to the heartland of America. You get a sense of what America really is.” Mara and Brett credit living in Kansas for helping them realize the immense possibility in thinking across disciplines as artists and educators. Brett says the heartland is more artistically advanced than many people think. This sentiment has helped them embark on their current endeavors.

ArtSounds Kansas City provides a ripe climate for Mara’s pioneering of the ArtSounds project, a scholastic effort between KCAI and UMKC’s Conservatory of Music. In this creative atmosphere, music, art, dance, film and literature become indistinguishable. It begins by pairing one faculty member from KCAI with one faculty member from UMKC. Typically a composer is paired with a visual artist, but the group effort often includes dancers, poets and filmmakers. These two faculty members work

together on a performance that melds their artistic talents into a cohesive whole. ArtSounds performances are staged six times a year on the second Tuesday of the month at KCAI’s Epperson Auditorium. “I don’t know of too many places that actually facilitate two people coming together like that and creating a work not necessarily in any genre, but in a completely new context—one that can be invented,” Mara says. Brett assisted in the creation of the ArtSounds project and has his performance in March. He says it requires a certain artistic personality to make this type of sharing effective. “It really takes people being open, curious and nondefensive about their own genre,” Brett says. “To share ownership is hard for people to do.” Adding to the difficulty and perhaps the wonder of the project’s participatory nature is the fact that neither artist might be able to foresee where the piece is headed. “Several of my collaborations through ArtSounds, I had no idea going in what to expect. That’s one of the beautiful things about collaboration. You have to really let that system build itself,” Mara says.

Breaking boundaries The ArtSounds project is also represented in the form of music that Mara composes. “I’m very interested in not being able to discern between one sound and

above The couple appreciate that they are able to practice the kind of art they love while living in Shawnee.