THE ENDURING LEGACY OF ALYCE AND ELMER GREEN 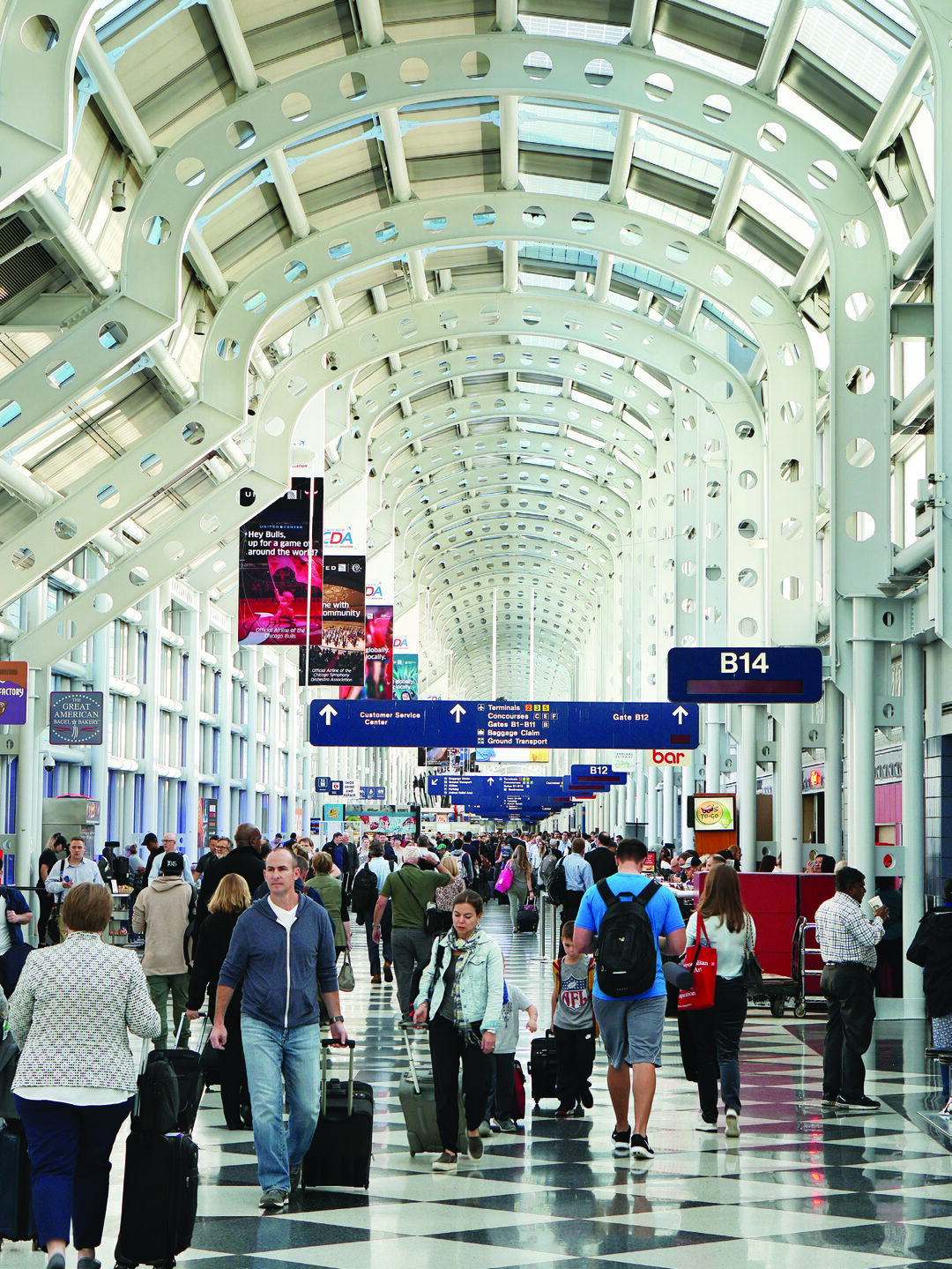 At the University of Kansas Medical Center, Dr. Sebastiano “Yano” Procopio helps some of the nation’s future health professionals take care of themselves and their own mental well-being.

“At KU Med, with health science students, graduate level, professional level, you can imagine that academic-related anxiety can be a big part of the experience for some folks,” Procopio says.

A licensed staff psychologist in the center’s Counseling & Educational Support Services department, Procopio calls on a range of techniques to assist students in responding to their high-pressure and emotionally draining environment. Among those is biofeedback, an approach focusing on selfawareness and partial self-regulation of involuntary body functions such as muscle tension, heart rate, blood pressure and body temperature.

“People can learn breathing techniques, and they may not necessarily need biofeedback to see that [their breathing] is shifting what’s happening physiologically in the heart and other connected systems in the body, like baroreceptors for blood pressure and respiratory systems, as well as the brain. They can learn [breathing] and can feel relaxed, and that’s the feedback they get. They feel better—they feel calmer, maybe their mood starts to shift,” Procopio says. “But when it comes to biofeedback, why it’s helpful is you actually get concrete data, realtime data, to see, not only is this working, but if you are shifting your body into a balanced or optimal physiological state.”

In their work, Procopio and colleagues use a HeartMath machine, a device made by a company of the same name that monitors heart rate and provides feedback to encourage the user to find an optimal state, or “coherence.”

“These are devices that are available to the public,” Procopio adds. “You don’t have to be a health professional to purchase them. They’re user friendly; they’re relatively affordable.”

The use of biofeedback at KU Medical Center, its integration with hi-tech applications and its possibility as an accessible home treatment approach likely would have intrigued Elmer Green. Known as one of the fathers of biofeedback, Elmer pioneered the practice during his research in Kansas and helped move it into the mainstream with his studies and writing.

But for Elmer, biofeedback was only part of a lifelong exploration of human consciousness at the margins of standard practices and thought. Late in his life, as his wife and lifelong collaborator, Alyce Green, began to succumb to Alzheimer’s, Elmer focused on facilitating Alyce’s transition to death with dignity and full spiritual awareness.

The result of this exploration is The Ozawkie Book of the Dead: Alzheimer’s Isn’t What You Think It Is, a three volume work that is both a love letter to his wife and a means to honor her memory. Overlapping biography, psychology, spirituality and procedures for care, it is a work whose premises of consciousness, afterlife and the ascension of the soul are probably on the periphery of American religious thought. Still, nearly two decades after the book’s 2001 release, it remains a universal work of love and an unflinching response to the loss and possibilities of living with a partner who fades, day by day, from the effects of Alzheimer’s.

As he describes in the first volume of Ozawkie Book of the Dead, Elmer Green was born in Oregon in 1917 and moved with his family to Minnesota when he was five. It was there, at the age of six, that he experienced his first dream vision, an altered state of consciousness in which he traveled back in time—in this case, to the founding of the United States—and awakened with a profound emotional impact that would leave him open to spiritual exploration throughout his life.

Though he would have an otherwise typical upper-midwestern childhood, Elmer encountered the concept of meditation in his teens; through a spiritual mentor he would explore past lives, work on astral projections of his soul and delve into more obscure aspects of spirituality. His mentor also introduced Elmer to Alyce, a former schoolteacher and actor and a mother of two young children. Though 10 years his senior, Alyce shared Elmer’s interest in spirituality.

Writing decades later in Beyond Biofeedback, an examination of the spiritual aspects of biofeedback, Alyce describes first meeting Elmer at Erwood’s meditation center and encountering not the body of a young man, but a luminous outline of a person. In June 1941, the couple married and were planning their lives around Elmer’s studies and their new family—plans that would be upended by America’s entry into World War II only six months later.

Though Elmer was able to graduate in 1942 with a degree in physics, the war effort soon swept Elmer and his family into its orbit as Elmer took jobs producing telescopic gun sights, working on autopilot and bombsight stabilizers, and assisting with ground maintenance for bomber missions.

Elmer and Alyce would emerge from the war years with four children and travels that had taken them together and separately to military postings in Idaho, California, Nevada, British Columbia, Kansas and Tinian (a Pacific Ocean island now part of the U.S. commonwealth of the Northern Mariana Islands).

Elmer continued as a physicist, developing weapon systems for the Navy after the war. Based at the Naval Ordnance Test Station in China Lake, California, he worked on rocket guidance systems and attempted to develop a mind-activated on-off switch. That switch never came to fruition, but it represented Elmer’s continued interest in the possibilities of the mind as both he and Alyce continued their spiritual explorations. Eventually, after prophetic dreams and soul searching, the couple decided to pursue additional studies; Elmer earned a PhD in biopsychology, and Alyce trained as a client-centered therapist.

In 1964, the couple’s careers took them to Kansas, where they bought a home in Ozawkie and where Elmer established a psychophysiology laboratory at Topeka’s prestigious Menninger Clinic. Here, Elmer began to make his mark as a researcher while devoting his professional and personal life to expanding the concept of biofeedback.

In 1969, Elmer co-founded the Biofeedback Research Society and, in the same year, Alyce and Elmer co-founded an annual spiritual-scientific retreat known as the Council Grove Conference to explore states of consciousness and spiritual development without the aid of mind-altering substances.

For some thirty years, the Greens would plunge into biofeedback and spirituality, Elmer through research at Menninger and the couple together in their explorations of breaking down barriers between the physical and spiritual dimensions.

Peter Parks, Elmer’s former research associate and now a board member of the Elmer E. and Alyce M. Green Foundation (a nonprofit dedicated to preserving and expanding the Greens’ work), describes the Greens as “motivated by a lifelong vision of a future science in which mind and matter were not separated.” He says his work at the Menninger Clinic under Elmer allowed him to observe a scientist who was also a seer, dreamer and intuitive thinker, who, though extremely learned, perceived his way through life.

Elmer developed his two best-known research projects— “Physical Fields and States of Consciousness” and the “Copper Wall”—after studying Indian yogi Swami Rama and Dutch philosopher and naturopath Jack Schwarz. Both men were reputed to possess the skills of an “adept,” a term referring to someone who has learned to control their autonomic physiological processes. The Greens traveled to India in the mid-1970s, as related by the Greens’ foundation’s website, “to document the physiologic skills of yogis, using a portable psychophysiology lab that Dr. Green designed.” Together, Alyce and Elmer would lecture in Australia, Canada, Great Britain, Holland, the Philippines and the Soviet Union, but they maintained their home in Ozawkie.

While the Menninger Clinic left Topeka for Houston in 2003, the Greens’ legacy was not abandoned in the departure. Nancy Trowbridge, the current director of communications for Menninger, worked alongside the Greens and says their spirit lives on in an organization that reflects the Greens’ values of “holistic and person-centered approach to wellness.”

But for the Greens, perhaps their most important collaboration came at the end of their careers, as Alyce developed Alzheimer’s and lived in a state that Elmer defined as a transition between two worlds.

Elmer, who believed that every person contained an immortal and a mortal soul, perceived Alzheimer’s as a condition that would subvert a natural transition to death— where a person’s mind allows the mortal soul a chance to see “a complete overview of the previous life” and prepare for its full transition to an immortal soul. Someone with Alzheimer’s, Elmer believed, was at risk of not being able to navigate this process and becoming “stuck” between two worlds.

For Alyce, this transition was further complicated by her background as a therapist. During her career, she concentrated on healing through mindfulness of the “here and now,” yet she recognized that her mind was gradually closing her off from the immediacy of life.

The second volume of the Ozawkie Book of the Dead is devoted largely to Alyce’s Alzheimer’s condition; Elmer recorded many aspects of their life in a diary from 1989 to 1994, when Alyce went through what she described as “the big goodbye.”

In many ways, the first and third books, which contain personal spiritual biographies, scientific interpretations, lessons from workshops and meditations on the future, provide frameworks for understanding and responding to Alyce’s state of mind.

The Ozawkie Book of the Dead—with its mélange of personal biography, technical acronyms and fragmented synopses—is not a particularly easy read. In his introduction and asides, Elmer acknowledges that his spiritual quest and beliefs might seem outside of mainstream American religious thought. Unlike the Greens’ work in biofeedback, their exploration of Alzheimer’s does not have a direct integration into common medical practice.

But however Elmer’s speculations about our souls might strike any one particular reader, he speaks to us—and particularly to anyone accompanying a loved one on the journey through Alzheimer’s—with a touching account of the gradual loss of Alyce as a chronicle of separations and loving responses.

Above all, Elmer’s work is a combined intellectual and heartfelt response to recognize and assist the spiritual transition of a person with Alzheimer’s. His work reminds us that the disease—even as it frightens and drains us—also illustrates our ability to recognize the presence, as Elmer describes, “of God on Earth” through the legacy of love for one another.

For more information on the work of Elmer and Alyce Green, visit their foundation’s website: elmergreenfoundation.org.

The three-volume work can be ordered online through partners of the Elmer E. and Alyce M. Green Foundation: elmergreenfoundation. org/green-references

Story by Haines Eason
This story is from:
Lawrence Magazine Senior 2020
by Sunflower Publishing