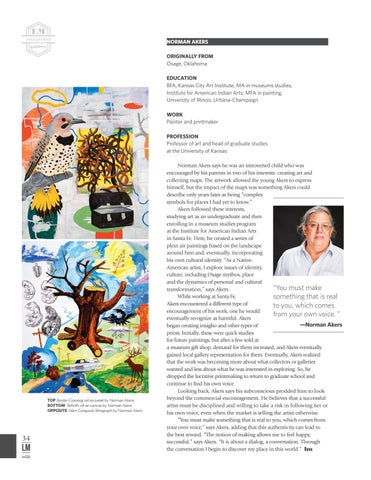 Norman Akers says he was an introverted child who was encouraged by his parents in two of his interests: creating art and collecting maps. The artwork allowed the young Akers to express himself, but the impact of the maps was something Akers could describe only years later as being “complex symbols for places I had yet to know.” Akers followed these interests, studying art as an undergraduate and then enrolling in a museum studies program at the Institute for American Indian Arts in Santa Fe. Here, he created a series of plein air paintings based on the landscape around him and, eventually, incorporating his own cultural identity. “As a NativeAmerican artist, I explore issues of identity, culture, including Osage mythos, place and the dynamics of personal and cultural “You must make transformation,” says Akers. While working at Santa Fe, something that is real Akers encountered a different type of to you, which comes encouragement of his work, one he would from your own voice. ” eventually recognize as harmful. Akers —Norman Akers began creating intaglio and other types of prints. Initially, these were quick studies for future paintings, but after a few sold at a museum gift shop, demand for them increased, and Akers eventually gained local gallery representation for them. Eventually, Akers realized that the work was becoming more about what collectors or galleries wanted and less about what he was interested in exploring. So, he dropped the lucrative printmaking to return to graduate school and continue to find his own voice. Looking back, Akers says his subconscious prodded him to look beyond the commercial encouragement. He believes that a successful artist must be disciplined and willing to take a risk in following her or his own voice, even when the market is telling the artist otherwise. “You must make something that is real to you, which comes from your own voice,” says Akers, adding that this authenticity can lead to the best reward. “The notion of making allows me to feel happy, successful,” says Akers. “It is about a dialog, a conversation. Through the conversation I begin to discover my place in this world.”