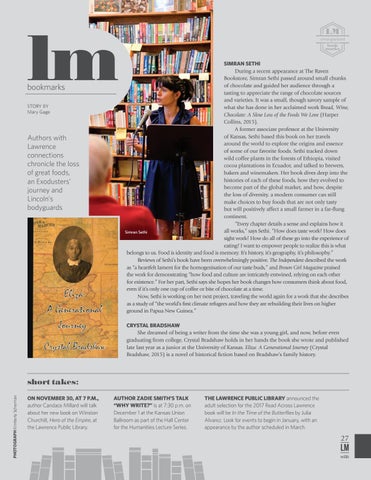 Authors with Lawrence connections chronicle the loss of great foods, an Exodusters’ journey and Lincoln’s bodyguards

SIMRAN SETHI During a recent appearance at The Raven Bookstore, Simran Sethi passed around small chunks of chocolate and guided her audience through a tasting to appreciate the range of chocolate sources and varieties. It was a small, though savory sample of what she has done in her acclaimed work Bread, Wine, Chocolate: A Slow Loss of the Foods We Love (Harper Collins, 2015). A former associate professor at the University of Kansas, Sethi based this book on her travels around the world to explore the origins and essence of some of our favorite foods. Sethi tracked down wild coffee plants in the forests of Ethiopia, visited cocoa plantations in Ecuador, and talked to brewers, bakers and winemakers. Her book dives deep into the histories of each of these foods, how they evolved to become part of the global market, and how, despite the loss of diversity, a modern consumer can still make choices to buy foods that are not only tasty but will positively affect a small farmer in a far-flung continent. “Every chapter details a sense and explains how it all works,” says Sethi. “How does taste work? How does Simran Sethi sight work? How do all of these go into the experience of eating? I want to empower people to realize this is what belongs to us. Food is identity and food is memory. It’s history, it’s geography, it’s philosophy.” Reviews of Sethi’s book have been overwhelmingly positive. The Independent described the work as “a heartfelt lament for the homogenisation of our taste buds,” and Brown Girl Magazine praised the work for demonstrating “how food and culture are intricately entwined, relying on each other for existence.” For her part, Sethi says she hopes her book changes how consumers think about food, even if it’s only one cup of coffee or bite of chocolate at a time. Now, Sethi is working on her next project, traveling the world again for a work that she describes as a study of “the world’s first climate refugees and how they are rebuilding their lives on higher ground in Papua New Guinea.” CRYSTAL BRADSHAW She dreamed of being a writer from the time she was a young girl, and now, before even graduating from college, Crystal Bradshaw holds in her hands the book she wrote and published late last year as a junior at the University of Kansas. Eliza: A Generational Journey (Crystal Bradshaw, 2015) is a novel of historical fiction based on Bradshaw’s family history.

short takes: ON NOVEMBER 30, AT 7 P.M., author Candace Millard will talk about her new book on Winston Churchill, Hero of the Empire, at the Lawrence Public Library.

AUTHOR ZADIE SMITH’S TALK “WHY WRITE?” is at 7:30 p.m. on December 1 at the Kansas Union Ballroom as part of the Hall Center for the Humanities Lecture Series.

THE LAWRENCE PUBLIC LIBRARY announced the adult selection for the 2017 Read Across Lawrence book will be In the Time of the Butterflies by Julia Alvarez. Look for events to begin in January, with an appearance by the author scheduled in March.