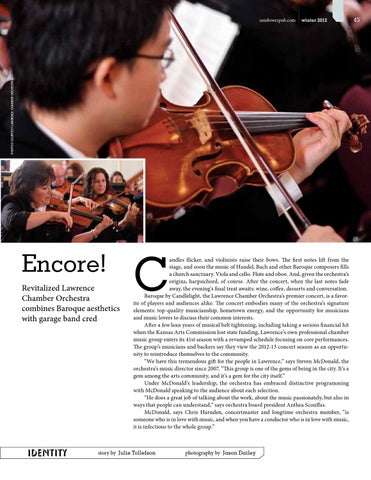 andles flicker, and violinists raise their bows. The first notes lift from the stage, and soon the music of Handel, Bach and other Baroque composers fills a church sanctuary. Viola and cello. Flute and oboe. And, given the orchestra’s origins, harpsichord, of course. After the concert, when the last notes fade away, the evening’s final treat awaits: wine, coffee, desserts and conversation. Baroque by Candlelight, the Lawrence Chamber Orchestra’s premier concert, is a favorite of players and audiences alike. The concert embodies many of the orchestra’s signature elements: top-quality musicianship, hometown energy, and the opportunity for musicians and music lovers to discuss their common interests. After a few lean years of musical belt tightening, including taking a serious financial hit when the Kansas Arts Commission lost state funding, Lawrence’s own professional chamber music group enters its 41st season with a revamped schedule focusing on core performances. The group’s musicians and backers say they view the 2012-13 concert season as an opportunity to reintroduce themselves to the community. “We have this tremendous gift for the people in Lawrence,” says Steven McDonald, the orchestra’s music director since 2007. “This group is one of the gems of being in the city. It’s a gem among the arts community, and it’s a gem for the city itself.” Under McDonald’s leadership, the orchestra has embraced distinctive programming with McDonald speaking to the audience about each selection. “He does a great job of talking about the work, about the music passionately, but also in ways that people can understand,” says orchestra board president Anthea Scouffas. McDonald, says Chris Harnden, concertmaster and longtime orchestra member, “is someone who is in love with music, and when you have a conductor who is in love with music, it is infectious to the whole group.” 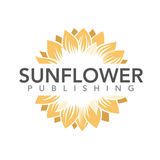