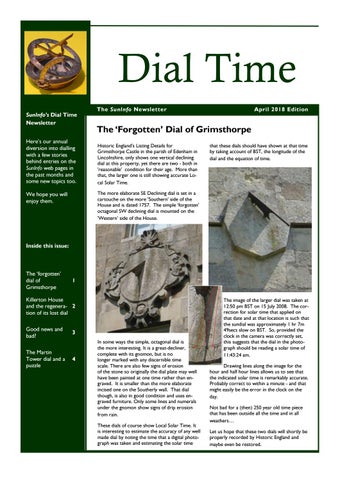 The ‘Forgotten’ Dial of Grimsthorpe Here’s our annual diversion into dialling with a few stories behind entries on the SunInfo web pages in the past months and some new topics too.

Historic England's Listing Details for Grimsthorpe Castle in the parish of Edenham in Lincolnshire, only shows one vertical declining dial at this property, yet there are two - both in 'reasonable' condition for their age. More than that, the larger one is still showing accurate Local Solar Time.

that these dials should have shown at that time by taking account of BST, the longitude of the dial and the equation of time.

We hope you will enjoy them.

The ‘forgotten’ dial of Grimsthorpe

Killerton House and the regenera- 2 tion of its lost dial Good news and bad? The Martin Tower dial and a puzzle

In some ways the simple, octagonal dial is the more interesting. It is a great-decliner, complete with its gnomon, but is no longer marked with any discernible time scale. There are also few signs of erosion of the stone so originally the dial plate may well have been painted at one time rather than engraved. It is smaller than the more elaborate incised one on the Southerly wall. That dial though, is also in good condition and uses engraved furniture. Only some lines and numerals under the gnomon show signs of drip erosion from rain. These dials of course show Local Solar Time. It is interesting to estimate the accuracy of any well made dial by noting the time that a digital photograph was taken and estimating the solar time

The image of the larger dial was taken at 12:50 pm BST on 15 July 2008. The correction for solar time that applied on that date and at that location is such that the sundial was approximately 1 hr 7m 49secs slow on BST. So, provided the clock in the camera was correctly set, this suggests that the dial in the photograph should be reading a solar time of 11:43:24 am. Drawing lines along the image for the hour and half hour lines allows us to see that the indicated solar time is remarkably accurate. Probably correct to within a minute - and that might easily be the error in the clock on the day. Not bad for a (then) 250 year old time piece that has been outside all the time and in all weathers… Let us hope that these two dials will shortly be properly recorded by Historic England and maybe even be restored.

The Theft of the Killerton House Dial and a Possible First for Dialling! Killerton House and estate was given to the National Trust in 1944 by the then owner Richard Acland who, at the time, was an advocate of public land ownership.

changed to a fully dimensioned plan view, a dimensioned drawing of the original was obtained. With delineation of the dial-plate precisely cal-

The original sundial is seen here in a photo taken by the late Anne Somerville, one of several available at the time of the restoration. The dial had been made in1784 by Benjamin Martin, a

Here we describe one of the early examples of the use of Photogrammetry to prepare a plan drawing of a lost dial simply from casually taken photographs..

London instrument maker. It is thought that this particular dial was one of his last instruments. It is recorded in the National Register of UK sundials as SRN 3223. On the 20/21 July 1996 the dial was stolen and has never been found. Fortunately, in this particular case, there were some quite good photographs of it, including colour close-up pictures of the dial-plate and of the â&#x20AC;&#x2DC;signature.â&#x20AC;&#x2122; By measuring the diameter of the circular mark remaining on the pedestal, it was possible to determine the diameter of the instrument. Then, by digital photogrammetric methods which permit the viewpoint of an image to be

culated for the latitude, an engineering calibre drawing was commissioned in 1999 to allow Plowden & Smith to construct a reproduction of the original in every detail. The final version (with applied patina) is now recorded as SRN 4122 in the National Register. It is thought that this is one of the very first applications of photogrammetry to sundial restoration. Undoubtedly it was very successful.

There’s ‘Good News’ and then there’s ‘Bad News’... So how come the dial is painted without a vertical noon line and shows a line for 01:00 am? Just as worrying, is how can it be that the drawn hour lines are at such strange angular spacings and the gnomon does not lie along the expected time line of 06:32 am? The answer almost certainly lies in ‘Restoration Drift’, the way in which successive repaints made on top of lost detail simply do not follow the correct delineation. The diagram below roughly shows the correct layout of the hour and half hour lines for this dial and the cross on it indicates the correct position of the gnomon. Just about anyone interested in sundials knows how important it is to look up rather more than usual if you are to spot vertical sundials. But to see the great decliner in the apex of the roof of the old Union Chapel in Ampthill, in Bedfordshire, now the Baptist Church, really does require you to look up; it is high in the apex of the roof above a plaque declaring the date of building and that of its extension. The whole mount has been re-bricked using engineering bricks rather than ones of the original colour. It is easy to visit Ampthill many times over a few decades and still never notice it there. The discovery of a rarely seen great declining dial therefore is rightly good news, as is the fact that clearly the dial in question has recently been carefully repainted. So, what then might be the bad news in the heading to this page? Well, it is simply that the delineation is seriously incorrect! Just look at a close up of the dial face. The dial faces approximately 80 degrees East of South and is at 52.03 degrees N in Latitude so it should display the local meridian’s solar time between something like the hours of 03:45am and 12:45pm.

How sad that the opportunity for repainting did not include consideration of the dial’s proper operation.

It’s not cheap to repaint an old dial so it’s always a good idea to check the delineation before committing to the work. Checking before ‘Seizing the Day’ is clearly a good idea!

The Martin Tower Dial, and a history puzzle Among his frequent guests were his son Algernon Percy and Sir Walter Raleigh. It is thought by some that he was reluctant to leave at the time he was released. It was a fellow prisoner, the astronomer Thomas Harriot, who installed the original sundial for the Earl's benefit. The same Martin Tower was used to store the Crown Jewels between 1669 and 1841 when it was referred to as the Jewel Tower. In 1671 Colonel Thomas Blood

We try hard to ensure that the information and views expressed on these pages are complete and correct and that no copyright has been infringed. If you have noticed an error, omission or copyright infringement please do send an email to the webmaster via our website giving full details.

SunInfo provides an eclectic mix of news, information, research, advice and comment and it even includes a reference section containing over a hundred interesting documents devoted to the history, information and comment about sundials, sundialists and sundial societies in Britain and the world. How do you get to see all these? Just point your browser to:

In 1988 Christopher Daniel accepted a commission to replace the crumbling 17C original sundial on the famous ‘Martin Tower’ in the Tower of London. Some remains of the original Portland stone dial-plate were visible but there was no gnomon and no trace of any surface markings. Without photographs, illustrations or records of the original sundial, it was decided to fix a new stone dial-plate, of 17th century design over the original so as not to disturb the existing fabric. The dial-plate was incised with the required delineation on site, and painted white, with gilded hour-lines, numerals and embellishments. The tower had been built as a prison by King Henry III between 1238 – 1272. The Chief Architect and Master Builder was Henry de Reyns together with John of Gloucester and Robert of Beverley. For seventeen years from 1605 the Martin Tower Suite housed a famous guest, the ninth Earl of Northumberland. Held after the gunpowder plot he was hardly jailed, since his warders went to considerable lengths to assure his comfort and entertainment and his rooms eventually occupied most if not all of the Martin Tower. He entertained often and lavishly, and used it as the centre of operations for his widespread business enterprises.

and three accomplices tried to steal the Crown Jewels from the Martin Tower. The Deputy Keeper of the Jewels at that time, was a 77 year old man named Talbot Edwards who lived with his family in the Tower. Thomas Blood had gained the confidence of the old man by pretending to be a Parson. On May 9th 1671 Blood and his accomplices were shown by Talbot Edwards to the chamber where the Crown Jewels were kept. A cloak was thrown over his head, he struggled, was hit over the head and finally stabbed to death. The gang stole St. Edward's Crown and the Sceptre but were disturbed and fled. They were all captured. Blood refused to answer any questions and insisted he would talk to no one but the king. Two days later he was granted an audience with King Charles II. Blood was inexplicably released and then given a Royal pardon and a pension! The reason for this remains a total mystery however speculation has it that King Charles II who is known to have been extremely short of money, was himself behind the plot to steal the Crown Jewels. A newsletter for those interested in sundials, issued by SunInfo - the website of choice for sundial news, history and information.

A newsletter for those interested in sundials, issued by SunInfo - the website of choice for sundial news, history and information.