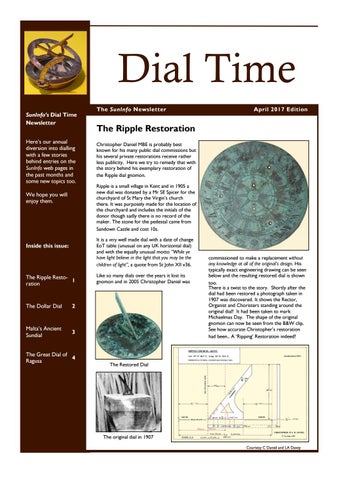 Dial Time SunInfo’s Dial Time Newsletter Here’s our annual diversion into dialling with a few stories behind entries on the SunInfo web pages in the past months and some new topics too. We hope you will enjoy them.

The Ripple Restoration Christopher Daniel MBE is probably best known for his many public dial commissions but his several private restorations receive rather less publicity. Here we try to remedy that with the story behind his exemplary restoration of the Ripple dial gnomon. Ripple is a small village in Kent and in 1905 a new dial was donated by a Mr SE Spicer for the churchyard of St Mary the Virgin’s church there. It was purposely made for the location of the churchyard and includes the initials of the donor though sadly there is no record of the maker. The stone for the pedestal came from Sandown Castle and cost 10s. It is a very well made dial with a date of change EoT table (unusual on any UK horizontal dial) and with the equally unusual motto “While ye have light believe in the light that you may be the children of light”, a quote from St John XII v36.

The Great Dial of 4 Ragusa

commissioned to make a replacement without any knowledge at all of the original’s design. His typically exact engineering drawing can be seen below and the resulting restored dial is shown too. There is a twist to the story. Shortly after the dial had been restored a photograph taken in 1907 was discovered. It shows the Rector, Organist and Choristers standing around the original dial! It had been taken to mark Michaelmas Day. The shape of the original gnomon can now be seen from the B&W clip. See how accurate Christopher’s restoration had been.. A ‘Ripping’ Restoration indeed!

The original dial in 1907 Courtesy C Daniel and LA Davey

The Dollar Dial Dollar is one of the six ‘Hillfoots Villages’ lying in Clackmannanshire between Stirling and St Andrews. Its famous school, The Dollar Academy was founded in 1818 by the benefaction of trader John McNabb. It is a coeducational day and boarding school which occupies a 70acre site in the centre of the town. Its main school building is a striking neoclassical design by the well known and eminent Scottish architect William Henry Playfair.

When an additional school building was needed for modern languages and economics, the Westwater building was designed. It was completed at the end of June 2015. It is named after Private George Philip Westwater who died at Gallipoli on 28th June, 1915, whilst serving with 1/4th battalion, Royal Scots QER. George had been brought up in Kinross and attended Dollar Academy from 1907 to 1912, before going on to work in a law office in Edinburgh. He was killed at Gallipoli on 28 June 1915 at the age of 21, almost one 100 years to the day prior to the building’s completion. In time for the formal opening on the 23 March 2016 by Lord Brodie and as a result of the requirement to produce a piece of public art as a condition to the planning consent, a sundial was commissioned from Edinburgh sculptor and dial maker, Tim Chalk. It was fabricated in Jessamite to match the substantial cast concrete panel bearing the school crest at the east end of the building, It is hoped that future astronomers, mathematicians, geographers and physicists will find this object stimulates their interest and curiosity as

well as adding something unique to the character of the grounds. The resulting declining vertical sundial incorporates a sphere, which demonstrates how the sun's light travels round the

Earth in the course of the day. The two sided panel carries text on the reverse showing a graph of the applicable Equation of Time, the longitude and latitude of the dial and the back half of the sphere emerges from the reverse of the panel.

The Longest Latin Sundial Motto in the world?

Licenced Grounspeak Waymark WM8J99 © 2017 Recently the website of the North American Sundial Society drew the sundial world’s attention to the plight of an important sundial in Malta, one which has long been neglected and which could soon even be demolished. The sundial is located to the rear of the Jesuits’ church, next to the Old University entrance in Triq San Pawl (St Paul Street) in Valletta. It is dated August 13, 1695, and probably marks the first centenary of the Jesuit’s original college, Collegium Melitense, that was founded in 1592 and which in turn paved the way for the present University of Malta, The University traces its origins to the founding by the Society of Jesus of the Collegium Melitense on 12 November 1592. This college was run by the Jesuits at Valletta for non-Jesuit students. In 1578, Pope Gregory XIII empowered the Jesuits to confer

the degrees of Magister Philosophiae and Doctor Divinitatis. Other subjects, however, such as grammar and the humanities were also taught. After the expulsion of the Jesuit Order from Malta in 1768 by Grand Master Pinto, he appropriated all the revenue accruing from its property and established a "Pubblica Università di Studi Generali." The decree constituting the university was signed by Pinto on the 22nd November 1769. This ancient dial declines some 30 degrees East and its horizontal gnomon would have indicated the hours from 5 am to 3 pm. Three lines mark the equinox and the two solstices. Sadly of course, the dial today is shaded at times by nearby buildings. The Latin motto has to be one of the longest sundial mottoes in the world. It reads "TEMPUS ERIT QUANDO CESSABIT TEM-

PUS ERITQUE LUX AETERNA BONIS NOX SINE FINE MALIS" which roughly translates to "There will be a time when time will cease and there will be eternal light for the good and endless night for the wicked." The Valletta campus of today’s University of Malta is housed in the Old University Building which incorporates their Aula Magna. The Valletta Campus serves as a prestigious setting for the hosting of modern day international conferences, seminars and short courses Signs of the Jesuit history remain. Directly across St Paul Street from the sundial is Xavier House and also a statue of St Francis Xavier, founder of the Jesuit Order still occupies the niche on Merchant Street, the north west corner of the building. All who know of this lovely dial hope it can be conserved.

The Great Dial of Ragusa La Chiesa di San Vincenzo Ferreri (The Church of St. Vincent Ferrer) in Via Giardino, Ragusa, Sicily, dates from 1509 but is now deconsecrated. It still sports a lovely though undated, large, old, painted dial to the right of its entrance.

SUNINFO NEWSLETTER APRIL 2017 Have you any sundial news or information that you think would be of interest to others? If so please send an email to our webmaster via our website at: www.bit.ly/suninfo

The dial shows Italian hours from 18 to 24 together with declination lines for the summer solstice and the equinoxes. It is always interesting to check the delineation of dials such by this using Google Earth to establish a likely dial declination. The Ragusa dial does not disappoint; as may be seen from just one of several trials produced using the excellent Sonne software. The design declination of the dial appears to be only slightly greater than that roughly measured on Google Earth. An impressive achievement.

We try hard to ensure that the information and views expressed on these pages are complete and correct and that no copyright has been infringed. If you have noticed an error, omission or copyright infringement please do send an email to the webmaster via our website giving full details.

SunInfo provides an eclectic mix of news, information, research, advice and comment and it even includes a reference section containing over a hundred interesting documents devoted to the history, information and comment about sundials, sundialists and sundial societies in Britain and the world.

Separate linked pages are dedicated to details of the latest Annual Conferences of both BSS and NASS, the locations of their venues, how to get there by train, car or air and things to see and do whilst in the area. How do you get to see all these? Just point your browser to: www.bit.ly/suninfo Or just scan the QR Code on this page at the left. ÂŠ P Powers, 2017 All rights reserved SunInfo's annual newsletter for 2017 with excerpts from the SunInfo web page and new items as well.

SunInfo's annual newsletter for 2017 with excerpts from the SunInfo web page and new items as well.