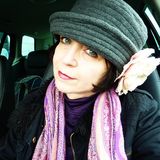 I studied illustration, painting, drawing and animation. Children's books, science fiction and the fantastic have always been a central interest for me. I also studied animation, painting and drawing at the Disney-funded California Institute of the Arts. After attending Immaculate Heart College and California State Northridge, I moved to New York, where, among other projects I illustrated two children's books: "Would You Rather? and "How Does it Feel...?, both published by Human Sciences Press. I was commissioned to illustrate articles and editorials for the L.A. Weekly and the Los Angeles Reader. Published work has also included illustrations for 'Solo Dolci, The Italian Dessert Cookbook' by Anna Bruni Benson. After moving to London I worked for a an advertising agency and in 2010 designed and edited a novel by entitled 'The Lion and the Swastika' by Anna Bruni Benson as well as a book of pictures and words called 'Wonderwell' also published by Lion Press."