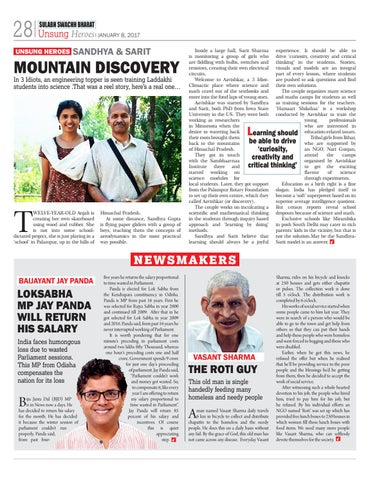 In 3 Idiots, an engineering topper is seen training Laddakhi students into science .That was a reel story, here’s a real one…

Inside a large hall, Sarit Sharma is monitoring a group of girls who are fiddling with bulbs, switches and resistors, creating their own electrical circuits. Welcome to Aavishkar, a 3 IdiotClimactic place where science and math crawl out of the textbooks and enter into the fond laps of young ones. Aavishkar was started by Sandhya and Sarit, both PhD from Iowa State University in the US. They were both working as researchers in Minnesota when the desire to watering back their roots brought them back to the mountains of Himachal Pradesh. They got in touch with the Sambhaavnaa Institute there and started working on science modules for local students. Later, they got support from the Palampur Rotary Foundation to set up their own centre, which they called Aavishkar (or discovery). The couple works on inculcating a scientific and mathematical thinking in the students through inquiry based approach and ‘learning by doing’ methods. Sandhya and Sarit believe that learning should always be a joyful

experience. It should be able to drive ‘curiosity, creativity and critical thinking’ in the students. Stories, visuals and models are an integral part of every lesson, where students are pushed to ask questions and find their own solutions. The couple organizes many science and maths camps for students as well as training sessions for the teachers. ‘Hamaari Shikshaa’ is a workshop conducted by Aavishkar to train the young professionals who are interested in education-related issues. Tribal girls from Bihar, who are supported by an NGO, Nari Gunjan, attend the camps organised by Aavishkar to get the exciting flavour of science through experiments. Education as a birth right is a fine slogan. India has pledged itself to become a ‘soft’ superpower based on its superior average intelligence quotient. But census reports reveal school dropouts because of science and math. Exclusive schools like Mirambika in posh South Delhi may cater to rich parents’ kids in the vicinity, but that is not the solution.May be the SandhyaSarit model is an answer.

Learning should be able to drive ‘curiosity, creativity and critical thinking’

WELVE-YEAR-OLD Anjali is creating her own skateboard using wood and rubber. She is not into some schooldictated project, she is just playing in a ‘school’ in Palampur, up in the hills of

Himachal Pradesh. At some distance, Sandhya Gupta is flying paper gliders with a group of boys, teaching them the concepts of aerodynamics in the most practical way possible.

LOKSABHA MP JAY PANDA WILL RETURN HIS SALARY India faces humongous loss due to wasted Parliament sessions. This MP from Odisha compensates the nation for its loss

iju Janta Dal (BJD) MP is in News now a days. He has decided to return his salary for the month. He has decided it because the winter session of parliament couldn’t run properly. Panda said, from past four-

five years he returns the salary proportional to time wasted in Parliament. Panda is elected for Lok Sabha from the Kendrapara constituency in Odisha. Panda is MP from past 16 years. First he was selected for Rajya Sabha in year 2000 and continued till 2009. After that in he got selected for Lok Sabha in year 2009 and 2016. Panda said, from past 16 years he never interrupted working of Parliament. It is worth pondering that for one minute’s preceding in parliament costs around two lakhs fifty Thousand, whereas one hour’s preceding costs one and half crore. Government spends 9 crore for just one day’s proceeding of parliament. Jay Panda said, “Parliament couldn’t work and money got wasted. So, to compensate it, like every year I am offering to return my salary proportional to time wasted in Parliament”. Jay Panda will return 85 percent of his salary and incentives. Of course this is quiet appreciating step.

man named Vasant Sharma daily travels 6 km in bicycle to collect and distribute chapattis to the homeless and the needy people. He does this on a daily basis without any fail. By the grace of God, this old man has not came across any disease. Everyday Vasant

Sharma, rides on his bicycle and knocks at 250 houses and gets either chapattis or pulses. The collection work is done till 5 o’clock. The distribution work is completed by 6 o’clock. His works of social service started when some people came to him last year. They were in search of a person who would be able to go to the town and get help from others so that they can put their hands and help those people who were homeless and were forced to begging and those who were disabled. Earlier, when he got this news, he refused the offer but when he realised that he’ll be providing service to the poor people and the blessings he’d be getting from them, then he decided to accept the work of social service. After witnessing such a whole hearted devotion to his job, the people who hired him, tried to pay him for his job, but he refused. By his individual efforts an NGO named ‘Roti’ was set up which has provided free lunch boxes to 250 houses in which women fill these lunch boxes with food items. We need many more people like Vasant Sharma, who can selflessly devote themselves for the society. 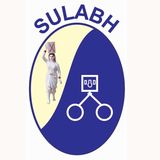