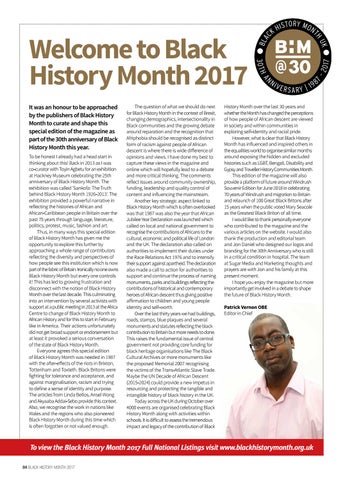 The question of what we should do next for Black History Month in the context of Brexit, changing demographics, intersectionality in Black communities and the growing debate around reparation and the recognition that Afriphobia should be recognised as distinct form of racism against people of African descent is where there is wide difference of opinions and views. I have done my best to capture these views in the magazine and online which will hopefully lead to a debate and more critical thinking. The comments reflect issues around community ownership, funding, leadership and quality control of content and influencing the mainstream. Another key strategic aspect linked to Black History Month which is often overlooked was that 1987 was also the year that African Jubilee Year Declaration was launched which called on local and national government to recognise the contributions of Africans to the cultural, economic and political life of London and the UK. The declaration also called on authorities to implement their duties under the Race Relations Act 1976 and to intensify their support against apartheid. The declaration also made a call to action for authorities to support and continue the process of naming monuments, parks and buildings reflecting the contributions of historical and contemporary heroes of African descent thus giving positive affirmation to children and young people identity and self-worth. Over the last thirty years we had buildings, roads, stamps, blue plaques and several monuments and statutes reflecting the black contribution to Britain but more needs to done. This raises the fundamental issue of central government not providing core funding for black heritage organisations like The Black Cultural Archives or more monuments like the proposed Memorial 2007 recognising the victims of the Trans-Atlantic Slave Trade. Maybe the UN Decade of African Descent (2015-2024) could provide a new impetus in resourcing and protecting the tangible and intangible history of black history in the UK. Today across the UK during October over 4000 events are organised celebrating Black History Month along with activities within schools. It is difficult to assess the tremendous impact and legacy of the contribution of Black

History Month over the last 30 years and whether the Month has changed the perceptions of how people of African descent are viewed in society and within communities in exploring self-identity and racial pride. However, what is clear that Black History Month has influenced and inspired others in the equalities world to organise similar months around exposing the hidden and excluded histories such as LGBT, Bengali, Disability and Gypsy and Traveller History Communities Month. This edition of the magazine will also provide a platform of future around Windrush Souvenir Edition for June 2018 in celebrating 70 years of Windrush and migration to Britain and relaunch of 100 Great Black Britons after 15 years when the public voted Mary Seacole as the Greatest Black Briton of all time. I would like to thank personally everyone who contributed to the magazine and the various articles on the website. I would also thank the production and editorial team and Jon Daniel who designed our logos and branding for the 30th Anniversary who is still in a critical condition in hospital. The team at Sugar Media and Marketing thoughts and prayers are with Jon and his family at this present moment. I hope you enjoy the magazine but more importantly get involved in a debate to shape the future of Black History Month. Patrick Vernon OBE Editor in Chief 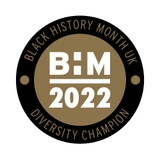