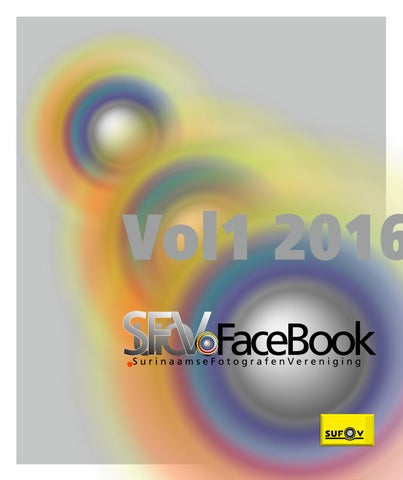 Foreword The year 2016 is another year that the Suriname Photographers Association (SuFoV) is redefining it’s raisons d’être in an era of change. The rise of digital photography, desktop publishing, social media, YouTube and Photography related blogs and websites in the digital age demands a change of mindset. SuFoV has to find a ‘FIT’ in the needs and the expectations of Suriname in general and its members in particular to make the photography sector future proof. Therefore various initiatives are in the pipeline or were launched this and previous years. A few of those worth mentioning with regard to image building and professionalization of its members, are the Photography Exchange Project with the Hellenic Photography Society of Greece, which will be held in 2017, the SuFoV Academy for photography courses, and several alliances eq. the Association for Graphic Designers (GWF). In this context it’s an honor for me to present to you the first volume of the SuFoV facebook on the world wide web with works from a few of our members. Last but not least I would like to thank all those wonderful authors, the members, who participated with works in this first book and Peter Thielen BNO for the technical implementation.

May I wish you a pleasant viewing.

Graduated from the I.V.A (Instituut voor de Autohandel), in the Netherlands. Worked at Bruynzeel Suriname as manager of the Technical Dept. Currently retired. Self-employed with his own business BigFoot Tire Service &amp; Sales. Has enjoyed photography as a hobby for over 50 years. Made the challenging switch from analog to digital in 2012. Loves nature and macro photography. Currently shooting with Canon 70D and Canon 5D Mark III. Lenses: Canon 28 â&amp;#x20AC;&amp;#x201C; 300mm and Canon 100 mm macro.

Birth place: Paramaribo Email: chery10@yahoo.com Mobile: 00 597 8618190 My first photo camera was a Fuji analog camera, After that I switched to Canon point &amp; shoot digital camera’s. In 2004 I finished a Basic Photography course at SUFOV. I shoot for pleasure and have more interest in Nature Photography. I won prices in different local photo contests, participated in exhibitions and my photo’s appeared on calendars

T: 8282823, E: info@dirk.sr, W: www.dirk.sr Photography &amp; Graphic Design Personal Summary An all-round, results oriented Photographer and Graphic Designer Photographer with experience of delivering creative, graphic concepts for a wide range of fields. A solid reputation for innovation and the ability to lead projects from begin to end. Always acting in the best interests of the customer, and willing to take the lead role in design and projects. Key strengths lie in the ability to create graphics that communicate core values and business objectives.

Progress development: I have been a hobby photographer for years. Recently I decided to take on a more professional route. I started with learning and improving my knowledge in basic skills whilst working on projects on my own or with friends. Furthermore I expand my knowledge with a lot of reading, watching how to videos and of course a lot of camera work to practice. I also engage in photography discussions with more experienced photographers which helps me in the right direction to improve in knowledge and quality!

Joice, Lalita Oedayrajsingh Varma Nieuw Nickerie, Republic of Suriname 05 September 1952 joicevarma@yahoo.com I did my Basic Photography and Light Room at SuFowwV. I am an amateur photographer with a lot of self-study. I am still learning and discovering a lot of new aspects through internet studies. My interest in photography started when I was a little girl watching my father taking pictures and developing his photoâ&amp;#x20AC;&amp;#x2122;s in his dark room where we sometimes were allowed to take a look. My interest leans towards nature photography and all its forms as well as any kind of photography art. I love black and white pictures.

My name is Judith Redmount, born and raised in Suriname. I work in the Airline Industry and for my job I’ve traveled a lot and met many new people and seen many new places. During those travels I’ve captured many moments with my camera and could enjoy them long after they were gone. It was during one of those moments that I fell in love with photography and since then I kept loving it over and over again. In 2008 I took a basic course in Photography at the Foundation for Surinamese Photographers (SuFoV). In 2012 I completed the 2 year “Complete course in professional photography” at the New York Institute of Photography. In 2013 I received the certificate for completion of the “Advanced Photographer “program from betterphoto.com. Travel photography, macro, nature and black &amp; white photography inspire the shining moments of my life to keep on going forward. In addition, I have served on the board of SUFOV and led the work group in

Progress development Various photo discussions at the Sufov club. I am using mini photography projects. I do this sometimes alone or with photo buddies. These mini projects consist of various subjects. I choose a specific topic and keep myself engaged for a month of more in the capture of this topic in a unique way. For example, by a series of photographs of flowers, animals, insects, leaves, mushrooms etc. I expand my knowledge with studies through the Internet.

The Netherlands. Venray, March 30 1947 After studying Graphic School, Roermond, The Netherlands Graphic Lyceum, Eindhoven and AIVE, Eindhoven, The Netherlands, 1961-1973. Independent designer from 1973 to the present day. Lecturer, Graphic Lyceum, Eindhoven, 1990-2006. Lecturer, Fotovakschool, Apeldoorn, 2006-2010. Works as a lecturer/trainer in various training and training-centers in Paramaribo, Suriname, from 2003 to the present. Photographer and Video-artist, author and publisher of photographic and video art/books / fotofantasia, my vision on photography- and videoart.

Studied at University of Central Missouri, USA Graduated from I.O.L with a major in English (Teaching Academy), Suriname Published author: novels, children’s books, poetry and short stories in USA, Holland and Suriname. Photography enthusiast and active hobbyist. I love nature photography in all its forms and thrive on the challenge of pursuing the object and/or the view I want. And yes, I admit, I absolutely adore taking pics of my grandkids. My last three children’s books are illustrated with my photography efforts. Cameras: I started out with a Canon Rebel T2i and kit lenses. Currently shooting with Nikon D5200 and Nikon D7100. Lenses: Nikon 18-300mm, Nikon 105mm macro, Sigma 150–500mm Exhibitions: SuFoV 2012, SUFOV 2013 National Art Exhibit, Suriname: NK 2013, NK 2014, NK 2015

Tanya Frijmersum, age 54, living in Paramaribo, Suriname Interested in visual arts and the performing arts. Picked up photography in 1993 (holiday shots) and gradually made it a hobby. 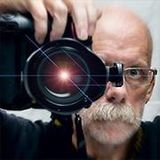