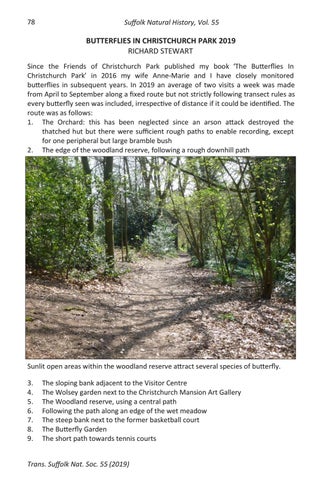 BUTTERFLIES IN CHRISTCHURCH PARK 2019 RICHARD STEWART Since the Friends of Christchurch Park published my book â&#x20AC;&#x2DC;The Butterflies In Christchurch Parkâ&#x20AC;&#x2122; in 2016 my wife Anne-Marie and I have closely monitored butterflies in subsequent years. In 2019 an average of two visits a week was made from April to September along a fixed route but not strictly following transect rules as every butterfly seen was included, irrespective of distance if it could be identified. The route was as follows: 1. The Orchard: this has been neglected since an arson attack destroyed the thatched hut but there were sufficient rough paths to enable recording, except for one peripheral but large bramble bush 2. The edge of the woodland reserve, following a rough downhill path

The sloping bank adjacent to the Visitor Centre The Wolsey garden next to the Christchurch Mansion Art Gallery The Woodland reserve, using a central path Following the path along an edge of the wet meadow The steep bank next to the former basketball court The Butterfly Garden The short path towards tennis courts

10. Longer grasses below the tennis courts 11. Following a path through long grasses up to the permitted cycle route 12. The northern edge of the park, with recording extended beyond the Park Road exit to include all of the ‘Urban Buzz’ planting of wildflower strips

The dappled shade along the edge of the woodland is an ideal habitat for Speckled Wood butterflies Additional observations were made on journeys to and from central Ipswich along the path from the Westerfield road gate and all but sections 1,3,4 and 5 were covered on most Sundays, during journeys to and from the Quaker Meeting House in Fonnereau road. Each section is listed below, with observations and species recorded. 1. The Orchard. A native species hedge, supplemented a few years ago with buckthorn, the Brimstone’s larval food plant, is slowly being invaded by rank weeds but there are still plenty of nectar sources present, including fruit tree blossom, dandelion, thistles of various species, bramble and ivy. Nettle beds used as larval food plants by several butterfly species and soft fermenting fruit is plentiful in autumn. The best one-day total was thirty-three butterflies on 10 July, mainly Meadow Browns. 10 species: Small Skipper, Large White, Small White, Green-veined White, Red Admiral, Comma, Peacock, Speckled Wood, Gatekeeper, Meadow Brown. 2. The Woodland reserve edge. There are just a few nectar sources in sunlit stretches and just two species were recorded, Brimstone and Speckled Wood. Trans. Suffolk Nat. Soc. 55 (2019)

This recent semi-circular planting of Gorse and Broom has attracted Green Hairstreak butterflies. The grass area within was cleared of competing oak saplings. ragwort and ivy. This hosts the main colony of Ringlets but only a maximum of four were recorded on a single visit. Brown Argus was recorded here for the first time, making it four different park locations for this previously rarely recorded species. 8 species: Small Skipper, Large White, Small White, Brown Argus, Painted Lady, Gatekeeper, Meadow Brown, Ringlet.

This wildflower strip along the northern edge of the park links in with the recent Gorse and Broom planting and is part of the â&#x20AC;&#x2DC;Urban Buzzâ&#x20AC;&#x2122; project. 10. Area below the tennis courts. This has both gorse and broom, larval food plants for Green Hairstreaks. Bramble is present and sorrel was particularly evident this year, its rich colouring complemented by a nearby copper beech. In the long grass there is yarrow, hawkweed and knapweed. 12 species: Small Skipper, Essex Skipper, Small White, Green Hairstreak, Small Copper, Brown Argus, Holly Blue, Peacock, Speckled Wood, Gatekeeper, Meadow brown, Ringlet. 11. Path through grasses towards the designated cycle track. Yarrow, hawkweed and ragwort are the main nectar sources and on 25th July two Small Skippers, three Small Coppers, three Gatekeepers and three Meadow Browns were nectaring on one sunlit ragwort. 12 species: Small Skipper, Large White, Purple Hairstreak (in surrounding oak trees), Small Copper, Brown Argus, Common Blue, Holly Blue, Red Admiral, Painted lady, Gatekeeper, Meadow Brown, Ringlet. 12. The northern boundary. At one end there is a deep nettle bed and later in the year yarrow is abundant in the long grasses. Deep bramble beds line the boundary fences and other nectar sources include hedge garlic, hawkweed, ivy, clover and sorrel, the