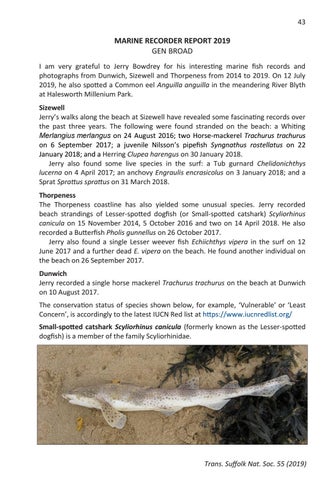 MARINE RECORDER REPORT 2019 GEN BROAD I am very grateful to Jerry Bowdrey for his interesting marine fish records and photographs from Dunwich, Sizewell and Thorpeness from 2014 to 2019. On 12 July 2019, he also spotted a Common eel Anguilla anguilla in the meandering River Blyth at Halesworth Millenium Park. Sizewell Jerry’s walks along the beach at Sizewell have revealed some fascinating records over the past three years. The following were found stranded on the beach: a Whiting Merlangius merlangus on 24 August 2016; two Horse-mackerel Trachurus trachurus on 6 September 2017; a juvenile Nilsson’s pipefish Syngnathus rostellatus on 22 January 2018; and a Herring Clupea harengus on 30 January 2018. Jerry also found some live species in the surf: a Tub gurnard Chelidonichthys lucerna on 4 April 2017; an anchovy Engraulis encrasicolus on 3 January 2018; and a Sprat Sprattus sprattus on 31 March 2018. Thorpeness The Thorpeness coastline has also yielded some unusual species. Jerry recorded beach strandings of Lesser-spotted dogfish (or Small-spotted catshark) Scyliorhinus canicula on 15 November 2014, 5 October 2016 and two on 14 April 2018. He also recorded a Butterfish Pholis gunnellus on 26 October 2017. Jerry also found a single Lesser weever fish Echiichthys vipera in the surf on 12 June 2017 and a further dead E. vipera on the beach. He found another individual on the beach on 26 September 2017. Dunwich Jerry recorded a single horse mackerel Trachurus trachurus on the beach at Dunwich on 10 August 2017. The conservation status of species shown below, for example, ‘Vulnerable’ or ‘Least Concern’, is accordingly to the latest IUCN Red list at https://www.iucnredlist.org/

Small-spotted catshark Scyliorhinus canicula (formerly known as the Lesser-spotted dogfish) is a member of the family Scyliorhinidae.

It is the most common catshark in the UK and is often caught in the Centre for Environment, Fisheries and Aquaculture Science (CEFAS) beam trawl surveys off the coast of Suffolk. The catshark egg cases that are sometimes washed ashore are known as Mermaid’s purses. The egg cases of this species are small (5–7 cm) and narrow rectangular in shape with curly tendrils at each corner. Conservation status: ‘Least Concern’. The Common eel Anguilla anguilla uses both marine and freshwater in its mysterious and complex life cycle. A study by CEFAS in 2016 tagged over 700 mature eels as they left European rivers in the autumn and tracked them as they travelled to spawning areas in the Sargasso Sea in the West Atlantic. The study revealed new facts about the ecology of this amazing species. For example, eels begin spawning earlier than expected (in December) with a peak on 14 February! Read more on the CEFAS website under News. Juveniles return to those same rivers, metamorphosing twice and using freshwater, estuarine and seawater. Whilst eels have often been considered common off Southwold and in Suffolk rivers (and are occasionally caught in CEFAS beam trawl surveys in the southern North Sea), they have declined by over 90% since the 1970s. Conservation status: ‘Critically Endangered’, UK Priority species. Atlantic herring Clupea harengus is a member of the family Clupeidae, which also

includes sprat, shads and sardines. This is an abundant pelagic fish species, with large shoals found off the Suffolk coast in the summer and autumn. Juveniles are more commonly found inshore, while adults extend further offshore. They are long lived, maturing at 2–9 years and traditionally spawn in coastal areas and outer estuaries. The Dogger Bank, off eastern England, was an historic spawning ground, but little activity has been recorded there recently. Conservation status: ‘Least Concern’. Sprat Sprattus sprattus is also a member of the herring family (Clupeidae) found in brackish or marine waters. They move to the water surface at night and feed on planktonic crustaceans. Sprats are an important food source for many predators. They are usually short-lived (less than 5 years), but some can reach 9 years of age. Conservation status: ‘Least Concern’.

The numbers of European anchovy Engraulis encrasicolus are highly variable, as it is a

short-lived fish, usually surviving only three years. Despite the large yearly fluctuations in numbers, overall catches in EU waters have declined dramatically, falling from almost 85,000 tons in 1965 to only 950 tons in 2005. This is a coastal species which feeds on plankton. Conservation status: ‘Least Concern’. Whiting Merlangius merlangus is a member of the family Gadidae, which includes

cod. It is usually found at depths of 30–100 m near mud and gravel bottoms, but also above sand and rock. It is abundant around the south east coast and is commonly caught in CEFAS beam trawl surveys off the Suffolk coast. Conservation status: ‘Least Concern’. Nilsson’s (or Lesser) pipefish Syngnathus rostellatus is a member of the seahorse

(Triglidae) family and lives on sand, muddy sand or gravel substrates, feeding on fish, crustaceans and molluscs. Like other gurnards, it has three isolated rays on the pectoral fins, with these fins particularly brightly coloured (green and blue) in Tub gurnard. The species is regularly caught by CEFAS beam trawl surveys off the Suffolk coast. Conservation status: ‘Least Concern’. Atlantic horse-mackerel Trachurus trachurus (or Scad) is a member of the family

Carangidae. They form large schools and feed on fish, crustaceans and cephalopods. Conservation status: ‘Vulnerable; International Council for the Exploration of the Sea (ICES): Below Safe Biological Limits.

around the UK, usually on rocky shores. They feed on small crustaceans, molluscs and fish eggs. The name comes from their slippery skin. Conservation status: Not evaluated. Lesser weever fish Echiichthys vipera is common around the British coast in shallow

sandy substrates and is often caught in CEFAS beam trawl surveys off the Suffolk coast. The species lives buried in sandy with only the eyes and back uncovered so the venomous spines of the first dorsal fin and gill covers can cause painful injuries to people who stand on them. The name â&#x20AC;&#x2DC;weeverâ&#x20AC;&#x2122; is derived from the Anglo-Saxon word for viper. Conservation status: Not evaluated. With grateful thanks to Jim Ellis, CEFAS, for his helpful comments and corrections on this article.