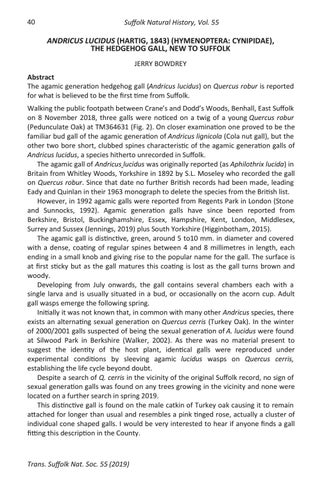 ANDRICUS LUCIDUS (HARTIG, 1843) (HYMENOPTERA: CYNIPIDAE), THE HEDGEHOG GALL, NEW TO SUFFOLK JERRY BOWDREY Abstract The agamic generation hedgehog gall (Andricus lucidus) on Quercus robur is reported for what is believed to be the first time from Suffolk. Walking the public footpath between Craneâ&#x20AC;&#x2122;s and Doddâ&#x20AC;&#x2122;s Woods, Benhall, East Suffolk on 8 November 2018, three galls were noticed on a twig of a young Quercus robur (Pedunculate Oak) at TM364631 (Fig. 2). On closer examination one proved to be the familiar bud gall of the agamic generation of Andricus lignicola (Cola nut gall), but the other two bore short, clubbed spines characteristic of the agamic generation galls of Andricus lucidus, a species hitherto unrecorded in Suffolk. The agamic gall of Andricus lucidus was originally reported (as Aphilothrix lucida) in Britain from Whitley Woods, Yorkshire in 1892 by S.L. Moseley who recorded the gall on Quercus robur. Since that date no further British records had been made, leading Eady and Quinlan in their 1963 monograph to delete the species from the British list. However, in 1992 agamic galls were reported from Regents Park in London (Stone and Sunnocks, 1992). Agamic generation galls have since been reported from Berkshire, Bristol, Buckinghamshire, Essex, Hampshire, Kent, London, Middlesex, Surrey and Sussex (Jennings, 2019) plus South Yorkshire (Higginbotham, 2015). The agamic gall is distinctive, green, around 5 to10 mm. in diameter and covered with a dense, coating of regular spines between 4 and 8 millimetres in length, each ending in a small knob and giving rise to the popular name for the gall. The surface is at first sticky but as the gall matures this coating is lost as the gall turns brown and woody. Developing from July onwards, the gall contains several chambers each with a single larva and is usually situated in a bud, or occasionally on the acorn cup. Adult gall wasps emerge the following spring. Initially it was not known that, in common with many other Andricus species, there exists an alternating sexual generation on Quercus cerris (Turkey Oak). In the winter of 2000/2001 galls suspected of being the sexual generation of A. lucidus were found at Silwood Park in Berkshire (Walker, 2002). As there was no material present to suggest the identity of the host plant, identical galls were reproduced under experimental conditions by sleeving agamic lucidus wasps on Quercus cerris, establishing the life cycle beyond doubt. Despite a search of Q. cerris in the vicinity of the original Suffolk record, no sign of sexual generation galls was found on any trees growing in the vicinity and none were located on a further search in spring 2019. This distinctive gall is found on the male catkin of Turkey oak causing it to remain attached for longer than usual and resembles a pink tinged rose, actually a cluster of individual cone shaped galls. I would be very interested to hear if anyone finds a gall fitting this description in the County.