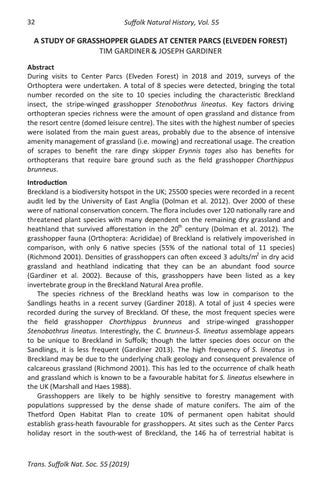 A STUDY OF GRASSHOPPER GLADES AT CENTER PARCS (ELVEDEN FOREST) TIM GARDINER & JOSEPH GARDINER Abstract During visits to Center Parcs (Elveden Forest) in 2018 and 2019, surveys of the Orthoptera were undertaken. A total of 8 species were detected, bringing the total number recorded on the site to 10 species including the characteristic Breckland insect, the stripe-winged grasshopper Stenobothrus lineatus. Key factors driving orthopteran species richness were the amount of open grassland and distance from the resort centre (domed leisure centre). The sites with the highest number of species were isolated from the main guest areas, probably due to the absence of intensive amenity management of grassland (i.e. mowing) and recreational usage. The creation of scrapes to benefit the rare dingy skipper Erynnis tages also has benefits for orthopterans that require bare ground such as the field grasshopper Chorthippus brunneus. Introduction Breckland is a biodiversity hotspot in the UK; 25500 species were recorded in a recent audit led by the University of East Anglia (Dolman et al. 2012). Over 2000 of these were of national conservation concern. The flora includes over 120 nationally rare and threatened plant species with many dependent on the remaining dry grassland and heathland that survived afforestation in the 20th century (Dolman et al. 2012). The grasshopper fauna (Orthoptera: Acrididae) of Breckland is relatively impoverished in comparison, with only 6 native species (55% of the national total of 11 species) (Richmond 2001). Densities of grasshoppers can often exceed 3 adults/m2 in dry acid grassland and heathland indicating that they can be an abundant food source (Gardiner et al. 2002). Because of this, grasshoppers have been listed as a key invertebrate group in the Breckland Natural Area profile. The species richness of the Breckland heaths was low in comparison to the Sandlings heaths in a recent survey (Gardiner 2018). A total of just 4 species were recorded during the survey of Breckland. Of these, the most frequent species were the field grasshopper Chorthippus brunneus and stripe-winged grasshopper Stenobothrus lineatus. Interestingly, the C. brunneus-S. lineatus assemblage appears to be unique to Breckland in Suffolk; though the latter species does occur on the Sandlings, it is less frequent (Gardiner 2013). The high frequency of S. lineatus in Breckland may be due to the underlying chalk geology and consequent prevalence of calcareous grassland (Richmond 2001). This has led to the occurrence of chalk heath and grassland which is known to be a favourable habitat for S. lineatus elsewhere in the UK (Marshall and Haes 1988). Grasshoppers are likely to be highly sensitive to forestry management with populations suppressed by the dense shade of mature conifers. The aim of the Thetford Open Habitat Plan to create 10% of permanent open habitat should establish grass-heath favourable for grasshoppers. At sites such as the Center Parcs holiday resort in the south-west of Breckland, the 146 ha of terrestrial habitat is

heavily forested (approximately 8.8 ha or 6% is open habitat). Given that only two grasshopper species have been recorded, the impacts of forestation may have been severe (Gardiner 2018). It is the aim of this short paper to report on a study of the Orthoptera and determine key drivers of diversity on the Center Parcs site at Elveden Forest in Breckland. The surveys During August 2018 on a family holiday at Center Parcs in Elveden Forest, approximately one hour was spent at each of six sites (glades 1-3, car park edge, lodge, and dome edge), each covering an area of c.100 x 100 m (1 ha), recording the Orthoptera species present using a combination of visual sightings and detection of stridulating males. Two more sites (golf course and treehouse area) were sampled in August 2019. During a round of golf, the number of species recorded on each hole was noted. It should be acknowledged that the surveys were samples and species could have been overlooked; therefore, additional species may be recorded at all sites. No attempt was made to record the abundance of Orthoptera species due to the difficulty in finding a suitable recording method which would accurately estimate densities in swards of varying heights. To analyse the data collected from the sites, species were given a frequency value. This represented the number of sites at which each species was recorded as a percentage of the total number surveyed (e.g. species found at three sites out of six = 50% frequency or III on the following scale). The frequency values were as follows: I = 0–20% frequency, II = 21–40%, III = 41–60%, IV = 61–80% and V = 81–100%. To determine the key factors influencing the diversity of Orthoptera at Center Parcs, the species richness was correlated with the percentage of open space (grassland, no tree cover) for each 1 ha site. To further ascertain influences over diversity, the distance from resort centre (determined as the domed subtropical pool) and from a potential source of colonising individuals (Lakenheath Warren) were measured. The former should reflect recreational disturbance, while the latter may have influenced diversity on a heavily wooded site with few open spaces. Species richness was correlated with percentage open space, distance from the resort centre, and distance from Lakenheath Warren using Spearman’s rank correlation (rs). Results and discussion A total of 8 species were recorded in the surveys: lesser marsh grasshopper Chorthippus albomarginatus (frequency = III), C. brunneus (V), meadow grasshopper Chorthippus parallelus (III), common green grasshopper Omocestus viridulus (IV), long -winged conehead Conocephalus fuscus (II), Roesel’s bush-cricket Metrioptera roeselii (IV), dark bush-cricket Pholidoptera griseoaptera (II), and S. lineatus (II). A search of the NBN Gateway revealed that the oak bush-cricket Meconema thalassinum and great green bush-cricket Tettigonia viridissima have also been recorded at Center Parcs, bringing the species richness for Elveden Forest to 10, 63% of the Norfolk Orthoptera (16 species). This makes the Center Parcs site comparable to Santon Warren in Norfolk (9 species), another excellent site for Orthoptera in Breckland (Richmond 2001). Trans. Suffolk Nat. Soc. 55 (2019)

A species missing from Elveden Forest is the mottled grasshopper Myrmeleotettix maculatus, a typical insect of Brecklandâ&#x20AC;&#x2122;s grass heaths with exposed soil (Gardiner 2018). The nearest recorded population appears to be on Lakenheath Warren around 1 km away from Elveden Forest. There is hope that a small population may exist in an open area at Center Parcs, with the creation of bare ground in the forest glades likely to be favourable for it. The creation of scrapes in Elveden Forest to benefit the rare dingy skipper Erynnis tages also has benefits for orthopterans that require bare ground such as C. brunneus. The three heathy glades within the site had a high species richness (3-7 species/ ha), only bettered by the rough grassland and scrub along the fairways of the golf course (8 species). The presence of sparse grassland and deliberate scrapes (Fig. 1) and accidental soil disturbance (walkersâ&#x20AC;&#x2122; feet) provided excellent habitat for species such as C. brunneus and S. lineatus. Longer grassland in the glades was ideal habitat for species of taller swards such as C. fuscus, M. roeselii and O. viridulus. If just the grasshopper species richness is considered, Elveden Forest (3.1 species/ha) has a more diverse fauna than Breckland overall (2.5 species/ha; Gardiner 2018).

Fig. 1. Grassland scrape in one of the grasshopper glades The area of open space was positively correlated (rs 0.99, P<0.01) with species richness (Fig. 2); glades with the largest area of grassland had the highest number of species. This included the eastern glade with the scrapes (6 species), grassland within the pit/hollow to the south (7 species) and the golf course (8 species). The characteristic Breckland species, S. lineatus, was recorded at two sites, and was not found at any other locations. The distance of sites from the resort centre was significantly correlated with species richness (rs 0.92, P<0.01), suggesting that recreational disturbance was also a

Fig. 2. The relationship between open space and Orthoptera species richness in Elveden Forest The nearest source of colonising species from optimal heathland habitat, Lakenheath Warren (Fig. 4), was also not an important influence; there being no statistically significant correlation between a siteâ&#x20AC;&#x2122;s distance from it or species richness (rs 0.52). The isolation of most of the grassland in the heavily forested Center Parcs site makes colonisation of glades by new species unlikely, or at best slow.

key factor controlling the diversity of Orthoptera (Fig. 3). The two sites with the largest percentage of open space were located over 500 m from the resort centre and would have been relatively undisturbed by walkers or cyclists and amenity management (i.e. regular mowing) likely to be detrimental to Orthoptera. The maintenance vans make a clear, if factually inaccurate point (grasshoppers do not sleep during winter! Fig. 5), about the importance of the site for Orthoptera. It appears the maintenance of open spaces at Elveden is likely to be crucially important for the persistence of healthy populations of grasshoppers and bush-crickets. The prevention of scrub encroachment should maintain the open grassland, while soil disturbance through the creation of scrapes is also a good technique to encourage species such as C. brunneus and S. lineatus (Gardiner 2018). The prolonged period of dry weather from June-July in 2018 left Breckland grasslands desiccated and at a high risk of fire. Interestingly, the lack of rain appeared to promote the kind of sparse grasslands in Elveden Forest that some species of early successional stages prefer (e.g. C. brunneus). The golf course is the best site on the site for Orthoptera (8 species), with an average of 3.4 species/hole. The grassy bunkers and sparse grassland (Fig. 6) were prime habitat for grasshoppers such as C. brunneus and S. lineatus. Maintenance of uncut grass along the fairways and around the greens and bunkers is a suggested conservation measure to ensure the golf course retains its value for Orthoptera. The long grassland around holes 5 and 9 was particularly rich in Orthoptera (Fig. 7), with the shadier early holes (1-3) less so.

Fig. 5. Center Parcs maintenance van with incorrect grasshopper information. The enlargement of grasshopper glades by the selective felling of conifers will extend grassland habitat suitable for Orthoptera. Such a strategy is already adopted by Center Parcs and fits within the Thetford Open Habitat Plan. If the current area of open space (6%) was increased to 10% (14.6 ha) we would expect populations of Orthoptera to spread within the Elveden Forest site.

A study of grasshopper glades at Center Parcs (Elveden Forest)

A study of grasshopper glades at Center Parcs (Elveden Forest)