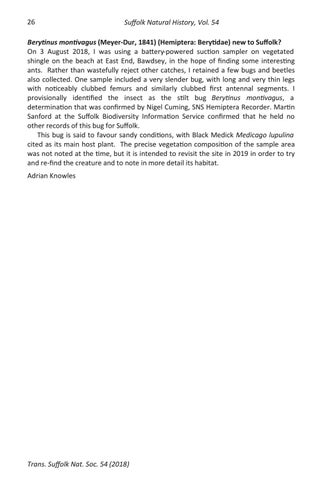 Berytinus montivagus (Meyer-Dur, 1841) (Hemiptera: Berytidae) new to Suffolk? On 3 August 2018, I was using a battery-powered suction sampler on vegetated shingle on the beach at East End, Bawdsey, in the hope of finding some interesting ants. Rather than wastefully reject other catches, I retained a few bugs and beetles also collected. One sample included a very slender bug, with long and very thin legs with noticeably clubbed femurs and similarly clubbed first antennal segments. I provisionally identified the insect as the stilt bug Berytinus montivagus, a determination that was confirmed by Nigel Cuming, SNS Hemiptera Recorder. Martin Sanford at the Suffolk Biodiversity Information Service confirmed that he held no other records of this bug for Suffolk. This bug is said to favour sandy conditions, with Black Medick Medicago lupulina cited as its main host plant. The precise vegetation composition of the sample area was not noted at the time, but it is intended to revisit the site in 2019 in order to try and re-find the creature and to note in more detail its habitat. Adrian Knowles