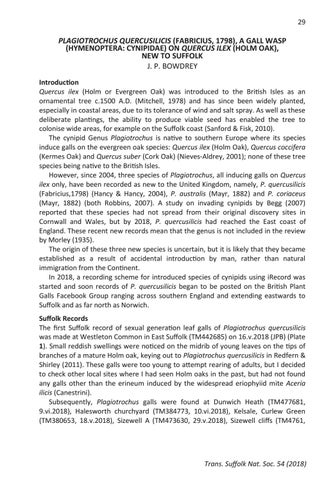 PLAGIOTROCHUS QUERCUSILICIS (FABRICIUS, 1798), A GALL WASP (HYMENOPTERA: CYNIPIDAE) ON QUERCUS ILEX (HOLM OAK), NEW TO SUFFOLK J. P. BOWDREY Introduction Quercus ilex (Holm or Evergreen Oak) was introduced to the British Isles as an ornamental tree c.1500 A.D. (Mitchell, 1978) and has since been widely planted, especially in coastal areas, due to its tolerance of wind and salt spray. As well as these deliberate plantings, the ability to produce viable seed has enabled the tree to colonise wide areas, for example on the Suffolk coast (Sanford & Fisk, 2010). The cynipid Genus Plagiotrochus is native to southern Europe where its species induce galls on the evergreen oak species: Quercus ilex (Holm Oak), Quercus coccifera (Kermes Oak) and Quercus suber (Cork Oak) (Nieves-Aldrey, 2001); none of these tree species being native to the British Isles. However, since 2004, three species of Plagiotrochus, all inducing galls on Quercus ilex only, have been recorded as new to the United Kingdom, namely, P. quercusilicis (Fabricius,1798) (Hancy & Hancy, 2004), P. australis (Mayr, 1882) and P. coriaceus (Mayr, 1882) (both Robbins, 2007). A study on invading cynipids by Begg (2007) reported that these species had not spread from their original discovery sites in Cornwall and Wales, but by 2018, P. quercusilicis had reached the East coast of England. These recent new records mean that the genus is not included in the review by Morley (1935). The origin of these three new species is uncertain, but it is likely that they became established as a result of accidental introduction by man, rather than natural immigration from the Continent. In 2018, a recording scheme for introduced species of cynipids using iRecord was started and soon records of P. quercusilicis began to be posted on the British Plant Galls Facebook Group ranging across southern England and extending eastwards to Suffolk and as far north as Norwich. Suffolk Records The first Suffolk record of sexual generation leaf galls of Plagiotrochus quercusilicis was made at Westleton Common in East Suffolk (TM442685) on 16.v.2018 (JPB) (Plate 1). Small reddish swellings were noticed on the midrib of young leaves on the tips of branches of a mature Holm oak, keying out to Plagiotrochus quercusilicis in Redfern & Shirley (2011). These galls were too young to attempt rearing of adults, but I decided to check other local sites where I had seen Holm oaks in the past, but had not found any galls other than the erineum induced by the widespread eriophyiid mite Aceria ilicis (Canestrini). Subsequently, Plagiotrochus galls were found at Dunwich Heath (TM477681, 9.vi.2018), Halesworth churchyard (TM384773, 10.vi.2018), Kelsale, Curlew Green (TM380653, 18.v.2018), Sizewell A (TM473630, 29.v.2018), Sizewell cliffs (TM4761,

4762, 13.vi.2018), Theberton (TM433660, 18.v.2018), and Thorpeness (TM477609, 22.v.2018); adult male and female gall wasps were successfully reared, confirming the identity of the galls. No galls were found on two mature trees in the gardens at Helmingham Hall (TM1857, 27.v.2018). Identification of Plagiotrochus quercusilicis galls As shown in Plate 1 galls of the sexual generation are bright red, contrasting markedly with the pinkish, newly developing leaves of the Holm oak. They are usually multilocular, but can have from one to many larval cells per gall. The gall lies on the mid-vein protruding above and below the leaf lamella which appears as a frill around the gall. Development is first noticeable in May and individual galls give rise to either male or female gall wasps in June. After mating the female lays eggs in the bark of younger branches and twigs, inducing cryptic galls beneath the bark, but sometimes associated with swelling and deformation of the twig or branch. The agamic generation, comprising only females, emerges from the woody galls up to three years later and completes the life cycle by laying eggs in the leaf buds of the tree. Despite many attempts by Spanish and French workers, it has still not been possible to experimentally close the life cycle of this gall wasp, but the agamic generation is believed to be an insect described under the name Plagiotrochus gallaeramulorum (Boyer de Fonscolombe, 1832) (= P. kiefferianus Tavares, 1901) (Pujade-Villar, 2005; Askew et al.,2013) and originally reared from twig galls on Quercus coccifera. No distortions of the branches considered likely to be agamic generation galls of P. quercusilicis were found at any of the Suffolk sites, but several examples of an inquiline cynipid Saphonecrus gallaepomiformis (Boyer de Fonscolombe, 1832) were reared from cryptic galls beneath the bark of twigs. This species, apparently new to Britain, is a known inquiline in galls of Plagiotrochus species in the Mediterranean region, including those of P. quercusilicis (Bowdrey, in press). Jose-Luis Nieves-Aldrey (pers. comm.) informs me that the agamic generation of P. quercusilicis can sometimes occur as cryptic galls without accompanying external distortion of the host tissues, so there is a strong possibility that the twig galls are referable to this species, especially as no other Plagiotrochus species are currently recorded from Suffolk. Sexual generation galls are conspicuous and easily found in May and early June, the author would be interested to hear of further records of this new gall wasp, especially any from the west of the County. References Askew et al. (2013). Catalogue of parasitoids and inquilines in cynipid galls in the West Palaearctic. Zootaxa 3643(1): 1-133. Begg, T. (2007). Spatial and temporal dynamics in the development of invading cynipid communities in Britain. Thesis submitted for the degree of Doctor of Philosophy. Edinburgh, University of Edinburgh.