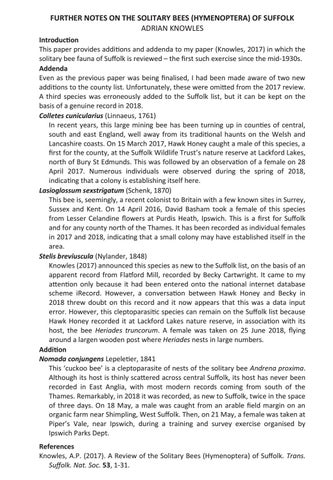 FURTHER NOTES ON THE SOLITARY BEES (HYMENOPTERA) OF SUFFOLK 25 SUFFOLK ACULEATE WASPS ADRIAN KNOWLES Introduction This paper provides additions and addenda to my paper (Knowles, 2017) in which the solitary bee fauna of Suffolk is reviewed – the first such exercise since the mid-1930s. Addenda Even as the previous paper was being finalised, I had been made aware of two new additions to the county list. Unfortunately, these were omitted from the 2017 review. A third species was erroneously added to the Suffolk list, but it can be kept on the basis of a genuine record in 2018. Colletes cunicularius (Linnaeus, 1761) In recent years, this large mining bee has been turning up in counties of central, south and east England, well away from its traditional haunts on the Welsh and Lancashire coasts. On 15 March 2017, Hawk Honey caught a male of this species, a first for the county, at the Suffolk Wildlife Trust’s nature reserve at Lackford Lakes, north of Bury St Edmunds. This was followed by an observation of a female on 28 April 2017. Numerous individuals were observed during the spring of 2018, indicating that a colony is establishing itself here. Lasioglossum sexstrigatum (Schenk, 1870) This bee is, seemingly, a recent colonist to Britain with a few known sites in Surrey, Sussex and Kent. On 14 April 2016, David Basham took a female of this species from Lesser Celandine flowers at Purdis Heath, Ipswich. This is a first for Suffolk and for any county north of the Thames. It has been recorded as individual females in 2017 and 2018, indicating that a small colony may have established itself in the area. Stelis breviuscula (Nylander, 1848) Knowles (2017) announced this species as new to the Suffolk list, on the basis of an apparent record from Flatford Mill, recorded by Becky Cartwright. It came to my attention only because it had been entered onto the national internet database scheme iRecord. However, a conversation between Hawk Honey and Becky in 2018 threw doubt on this record and it now appears that this was a data input error. However, this cleptoparasitic species can remain on the Suffolk list because Hawk Honey recorded it at Lackford Lakes nature reserve, in association with its host, the bee Heriades truncorum. A female was taken on 25 June 2018, flying around a largen wooden post where Heriades nests in large numbers. Addition Nomada conjungens Lepeletier, 1841 This ‘cuckoo bee’ is a cleptoparasite of nests of the solitary bee Andrena proxima. Although its host is thinly scattered across central Suffolk, its host has never been recorded in East Anglia, with most modern records coming from south of the Thames. Remarkably, in 2018 it was recorded, as new to Suffolk, twice in the space of three days. On 18 May, a male was caught from an arable field margin on an organic farm near Shimpling, West Suffolk. Then, on 21 May, a female was taken at Piper’s Vale, near Ipswich, during a training and survey exercise organised by Ipswich Parks Dept. References Knowles, A.P. (2017). A Review of the Solitary Bees (Hymenoptera) of Suffolk. Trans. Trans. Suffolk Nat. Soc. 54 (2018) Suffolk. Nat. Soc. 53, 1-31.

Further notes on the Solitary Bees (Hymenoptera) of Suffolk

Further notes on the Solitary Bees (Hymenoptera) of Suffolk