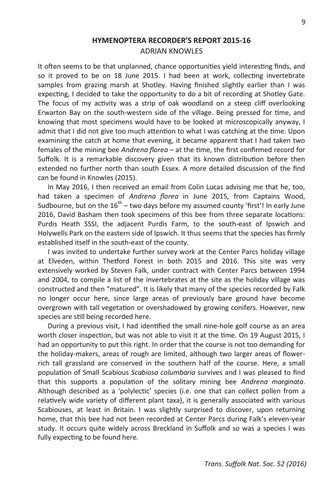 HYMENOPTERA RECORDER’S REPORT 2015-16 ADRIAN KNOWLES It often seems to be that unplanned, chance opportunities yield interesting finds, and so it proved to be on 18 June 2015. I had been at work, collecting invertebrate samples from grazing marsh at Shotley. Having finished slightly earlier than I was expecting, I decided to take the opportunity to do a bit of recording at Shotley Gate. The focus of my activity was a strip of oak woodland on a steep cliff overlooking Erwarton Bay on the south-western side of the village. Being pressed for time, and knowing that most specimens would have to be looked at microscopically anyway, I admit that I did not give too much attention to what I was catching at the time. Upon examining the catch at home that evening, it became apparent that I had taken two females of the mining bee Andrena florea – at the time, the first confirmed record for Suffolk. It is a remarkable discovery given that its known distribution before then extended no further north than south Essex. A more detailed discussion of the find can be found in Knowles (2015). In May 2016, I then received an email from Colin Lucas advising me that he, too, had taken a specimen of Andrena florea in June 2015, from Captains Wood, Sudbourne, but on the 16th – two days before my assumed county ‘first’! In early June 2016, David Basham then took specimens of this bee from three separate locations: Purdis Heath SSSI, the adjacent Purdis Farm, to the south-east of Ipswich and Holywells Park on the eastern side of Ipswich. It thus seems that the species has firmly established itself in the south-east of the county. I was invited to undertake further survey work at the Center Parcs holiday village at Elveden, within Thetford Forest in both 2015 and 2016. This site was very extensively worked by Steven Falk, under contract with Center Parcs between 1994 and 2004, to compile a list of the invertebrates at the site as the holiday village was constructed and then “matured”. It is likely that many of the species recorded by Falk no longer occur here, since large areas of previously bare ground have become overgrown with tall vegetation or overshadowed by growing conifers. However, new species are still being recorded here. During a previous visit, I had identified the small nine-hole golf course as an area worth closer inspection, but was not able to visit it at the time. On 19 August 2015, I had an opportunity to put this right. In order that the course is not too demanding for the holiday-makers, areas of rough are limited, although two larger areas of flowerrich tall grassland are conserved in the southern half of the course. Here, a small population of Small Scabious Scabiosa columbaria survives and I was pleased to find that this supports a population of the solitary mining bee Andrena marginata. Although described as a ‘polylectic’ species (i.e. one that can collect pollen from a relatively wide variety of different plant taxa), it is generally associated with various Scabiouses, at least in Britain. I was slightly surprised to discover, upon returning home, that this bee had not been recorded at Center Parcs during Falk’s eleven-year study. It occurs quite widely across Breckland in Suffolk and so was a species I was fully expecting to be found here. Trans. Suffolk Nat. Soc. 52 (2016)

The Center Parcs visits also yielded several other interesting records, as follows: Crossocerus pusillus 26 September 2015 â&#x20AC;&#x201C; a small digger wasp with only a handful of records for Suffolk, scattered right across the county. It is a ground-nesting species, which provisions its nest with small flies. Dolichovespula saxonica 19 August 2015 â&#x20AC;&#x201C; one of the large, yellow and black, social wasps. Probably even the common species are under-recorded, owing to the reluctance of casual recorders (or even seasoned campaigners) to attempt to catch insects at the more aggressive end of the spectrum. This species should be examined microscopically to separate it from the very similar looking Dolichovespula norwegica. Hence, it is difficult to gauge the true rarity of the less common species. This wasp is a relative newcomer to the British list, having been first recorded here in 1987, in Surrey. It is thought that queens may have arrived in imported materials. Having established itself in the south-east, it has since been undergoing a range expansion, so that it can now be found across lowland England. There are several sites in Norfolk, but in Suffolk there are but two. At Center Parcs, Steven Falk recorded in most years during his study and I also took a specimen in 2013. The only other Suffolk record was from the north-east coast, at Corton, taken by Paul Lee in 1999. It must surely occur more widely in Breckland and perhaps also in the wooded heaths of the Sandlings. Hoplitis claviventris 19 August 2015. In Suffolk, I only have a handful of records for this solitary bee from the Brecks. This is, perhaps, a little surprising since it can be found in a wide variety of flower-rich, sparsely vegetated habitats, including dune systems and coastal shingle, abandoned sandpits, heathland and open woodland. Lasioglossum sexnotatum 19 August 2015. Recent Suffolk records of this nationally endangered bee (UK Red Data Book, RDB1) were summarised in Knowles (2012). This is one of Britainâ&#x20AC;&#x2122;s rarer and most restricted bees, with south-east Suffolk and the Norfolk/Suffolk Brecks forming the core (if not the entirety) of its distribution in Britain. Its first modern record (from 1986) came from the Norfolk Brecks but, until this year, all other known localities were in south-east Suffolk. It was therefore a pleasing surprise to be able to add this species to the list of Center Parcs species, having found a female foraging at thistle plants outside the Country Club restaurant. Colin Lucas also took a specimen of Lasioglossum sexnotatum on 16 June 2015, at Captains Wood near Sudbourne, in the south-east of the county. The 2016 survey at Center Parcs focussed on the ant populations. This saw the capture of only six relatively common species although one, Lasius fuliginosus, is rather localised in its distribution and always good to see. It is a medium-sized, jet black, shiny ant that often forms visible trails of workers heading out on foraging runs. It has an interesting life style in that it forms colonies by taking over the nests of another ant (Lasius umbratus), which is presumably also present at Center Parcs, even though not directly observed. It (L. umbratus) leads a rather subterranean life, itself forming colonies by taking over nests of ants within the Lasius niger complex. During 2015, Jerry Lee took several interesting species whilst operating pan traps and malaise traps, primarily aimed at other invertebrate groups. On 1 July 2015 he

claimed a new county species in the form of the smaller digger wasp Psenulus schencki, taken near Stratford St Mary. Probably the most significant discovery of 2016 took several months to come to fruition. In mid-April, David Basham collected a small bee from Lesser Celandine flowers within the Purdis Heath SSSI to the eats of Ipswich. Having preserved it in his freezer for a while, he handed it to me with a batch of other specimens. A couple of tubs somehow got overlooked until September, when I dutifully identified the catch. This revealed the small bee to be a female of the mining bee Lasioglossum sexstrigatum. This is a quite remarkable discovery, given that this species was only added to the British list in 2008 (first taken in 2006), with the previous known localities comprising three sites in Surrey, one in West Sussex and one in Kent. Other interesting records during 2015 and 2016 are: Andrena cineraria, 1 June 2015, Ipswich Golf Club, taken by Neil Sherman. This quite large and distinctive bee has seemingly recently colonised the county as part of an easterly range expansion throughout England. This is the first record for vice county East Suffolk, of which I am aware. Andrena fulvago, 18 June 2015, Shotley Gate, taken by myself at the same location as the Andrena florea discussed above. This is now the third modern Suffolk record, following its rediscovery in the county in 2012. Anthophora quadrimaculata, 2 August 2015, Lackford Lakes Suffolk Wildlife Trust reserve. This is also the third modern record for this species in Suffolk. This bee has quite a restricted range in the UK, with most records coming from south of the Thames. Auplopus carbonarius, 18 June 2015, Shotley Gate – another good find from this day’s collecting at Shotley. This spider-hunting wasp was reported as new to Suffolk in Knowles (2014), being found in my dining room. The Shotley record is now the third locality for this species, which was still present in my garden in May 2016, when I caught a male. Chrysura radians, 31 July 2015, East Bergholt, taken by Jerry Lee; 5 June 2016, Purdis Heath, taken by David Basham. These are only the second and third county records for this ruby-tailed wasp, following its addition to the Suffolk list in 2002 by Justin Gant. Coelioxys inermis, nest cells of this leaf-cutter bee were found in timber at TM204441 (Rushmere, Ipswich) and taken to Suffolk Wildlife Trust offices at Ashbocking where the adult emerged in January 2015, under the supervision of Hawk Honey. Also, Neil Sherman caught a female at Ipswich Golf Club on 26 July 2016. This is a scarce bee in Suffolk. Evagetes pectinipes, 2 August 2016, Westleton, taken by Ian Cheeseborough. Until 2010, this spider-hunting wasp was not known in Britain outside of a couple of locations in Kent. Since then, it has been recorded a handful of times in Essex. Ian’s capture represents a county first for this species.

Hedychridium cupreum, 6 July 2016, Purdis Heath. Another important discovery made by David Basham, this being the first confirmed record for vice county East Suffolk. Lasius brunneus 7 May 2016, Tiger Hill. This Nationally Scarce ant was seen by myself in two nearby localities during a bioblitz event at this site. Nomada lathburiana, 7 May 2016, Tiger Hill. Another interesting record from the bioblitz. This bee is a cleptoparasite (or “cuckoo”), laying its eggs in the nests of the mining bee Andrena cineraria. It is following its host in an eastwards expansion across England. This is the third known locality for this bee, following a very old observation from Woodbridge by Mr Lathbury himself, and Knettishall Heath in 2008 and 2011. Nomada signata, 13 May 2015, Broom Hill, Valley Road, Ipswich. I caught two females after being encouraged to visit the site by Ipswich park rangers. Overall, the site is limited in its appeal to Hymenoptera, but this nationally threatened (RDB2) bee is only the sixth Suffolk locality. It is a cleptoparasite on the very common bee Andrena fulva. Priocnemis fennica, 12 July 2015, Higham;12 August 2015, East Bergholt. Caught by Jerry Lee whilst trapping for other invertebrates, these are only the third and fourth modern records for this spider-hunting wasp in Suffolk. Sapyga quinquepunctata, 7 May 2016. David Basham took the third modern Suffolk record, from a garden in Ipswich. As described above and in previous reports, south-east Suffolk is one of the main population centres in the UK for the mining bee Lasioglossum sexnotatum. In order to try and better understand its ecology, it had been hoped to collect foraging females and relieve them of their pollen loads in order that the pollen could be identified. This might then help site managers provide good foraging conditions for this nationally endangered species. SNS Council kindly agreed a bursary to cover the cost of having the pollen identified. This is no easy task but it often falls within the realm of forensic ecologists, providing evidence of where an item of clothing (or body!) has been, based upon the pollen dusted upon it. However, the poor early weather and general lack of observed pollen-carrying females thwarted the study in 2016. It is hoped to try again in 2017. References Knowles, A. (2012). Hymenoptera Recorder’s Report 2012. Trans. Suffolk Nat. Soc. 48: 88–92. Knowles, A. (2014). Hymenoptera Recorder’s Report 2013–14. Trans. Suffolk Nat. Soc. 50: 19–22. Knowles, A. (2015). Andrena florea Fabricius, 1793 new to Suffolk. Trans. Suffolk Nat. Soc. 51: 55–56. Adrian Knowles Jessups Cottage, London Road, Capel St Mary, IP9 2JR