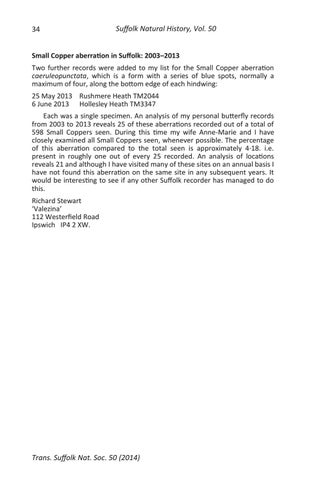 Small Copper aberration in Suffolk: 2003–2013 Two further records were added to my list for the Small Copper aberration caeruleopunctata, which is a form with a series of blue spots, normally a maximum of four, along the bottom edge of each hindwing: 25 May 2013 Rushmere Heath TM2044 6 June 2013 Hollesley Heath TM3347 Each was a single specimen. An analysis of my personal butterfly records from 2003 to 2013 reveals 25 of these aberrations recorded out of a total of 598 Small Coppers seen. During this time my wife Anne-Marie and I have closely examined all Small Coppers seen, whenever possible. The percentage of this aberration compared to the total seen is approximately 4∙18. i.e. present in roughly one out of every 25 recorded. An analysis of locations reveals 21 and although I have visited many of these sites on an annual basis I have not found this aberration on the same site in any subsequent years. It would be interesting to see if any other Suffolk recorder has managed to do this. Richard Stewart ‘Valezina’ 112 Westerfield Road Ipswich IP4 2 XW.