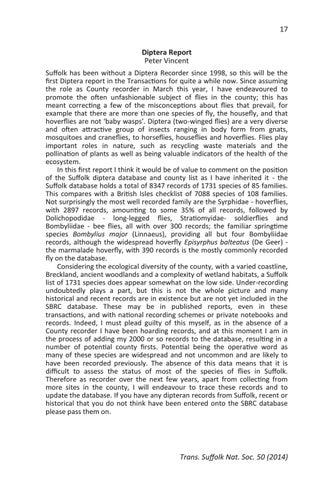 Diptera Report Peter Vincent Suffolk has been without a Diptera Recorder since 1998, so this will be the first Diptera report in the Transactions for quite a while now. Since assuming the role as County recorder in March this year, I have endeavoured to promote the often unfashionable subject of flies in the county; this has meant correcting a few of the misconceptions about flies that prevail, for example that there are more than one species of fly, the housefly, and that hoverflies are not â&#x20AC;&#x2DC;baby waspsâ&#x20AC;&#x2122;. Diptera (two-winged flies) are a very diverse and often attractive group of insects ranging in body form from gnats, mosquitoes and craneflies, to horseflies, houseflies and hoverflies. Flies play important roles in nature, such as recycling waste materials and the pollination of plants as well as being valuable indicators of the health of the ecosystem. In this first report I think it would be of value to comment on the position of the Suffolk diptera database and county list as I have inherited it - the Suffolk database holds a total of 8347 records of 1731 species of 85 families. This compares with a British Isles checklist of 7088 species of 108 families. Not surprisingly the most well recorded family are the Syrphidae - hoverflies, with 2897 records, amounting to some 35% of all records, followed by Dolichopodidae - long-legged flies, Stratiomyidae- soldierflies and Bombyliidae - bee flies, all with over 300 records; the familiar springtime species Bombylius major (Linnaeus), providing all but four Bombyliidae records, although the widespread hoverfly Episyrphus balteatus (De Geer) the marmalade hoverfly, with 390 records is the mostly commonly recorded fly on the database. Considering the ecological diversity of the county, with a varied coastline, Breckland, ancient woodlands and a complexity of wetland habitats, a Suffolk list of 1731 species does appear somewhat on the low side. Under-recording undoubtedly plays a part, but this is not the whole picture and many historical and recent records are in existence but are not yet included in the SBRC database. These may be in published reports, even in these transactions, and with national recording schemes or private notebooks and records. Indeed, I must plead guilty of this myself, as in the absence of a County recorder I have been hoarding records, and at this moment I am in the process of adding my 2000 or so records to the database, resulting in a number of potential county firsts. Potential being the operative word as many of these species are widespread and not uncommon and are likely to have been recorded previously. The absence of this data means that it is difficult to assess the status of most of the species of flies in Suffolk. Therefore as recorder over the next few years, apart from collecting from more sites in the county, I will endeavour to trace these records and to update the database. If you have any dipteran records from Suffolk, recent or historical that you do not think have been entered onto the SBRC database please pass them on.

I have received a number of interesting records this year; Martin Cooper has collected and photographed with amazing clarity some fascinating flies mainly from his garden and nearby Christchurch Park in Ipswich. These include the potential ‘Suffolk firsts’, Meiosimyza decempunctata (Fallén) (Lauxaniidae), Napomyza bellidis (Griffiths) and Phytomyza petoei (Hering (Agromyzidae), Paregle audacula (Harris) (Anthomyiidae) and Drosophila suzukii (Matsumura) (Drosophilidae) - see SBRC Flickr group for images https://www.flickr.com/groups/sbrc_suffolk-wildlife-photos/ D. suzukii was first recorded in the UK in August 2012 in Kent and has been spreading across England so its appearance in Suffolk was quite likely. As it is a serious pest of thin skinned fruits it has been the subject of research by DEFRA. Wendy Carter sent me some excellent ‘action’ photographs of the robberfly Dysmachus trigonus (Meigen) (Asilidae) attacking a blue-tailed damselfly Ischnura elegans (Vander Linden) at East Hill, Walberswick NNR (see Plate 10). I collected a number of the hoverfly Neoascia obliqua (Coe) from the Minsmere River valley floodplain at Middleton; this is only the second Suffolk site for what is normally a northern and western species. Earlier records were from Newbourne in 1992 and 1995. Two pieces that were published in the White Admiral earlier in the year promoted some interest and as a result I have received new records of both Volucella zonaria (Poda) and Stratiomys longicornis (Scopoli). So finally I would like to thank all those who have sent me records and hopefully a few more of you will be inspired to do so next year. Although physical voucher specimens are the gold standard in diptera identification, with modern digital cameras and technology it has never been easier to photograph living flies and I will be happy to accept records from photographs if they can be identified from the photograph with certainty – unfortunately many flies cannot be identified from images unless the critical features can be seen – therefore a number of pictures of the same fly taken from different angles are always preferable to one view. Online identification forums such as Dipterists Forum and Diptera.info are very good, where images can be uploaded and identifications can be given or confirmed by extremely knowledgeable dipterists, often national or even international experts in particular families. Peter Vincent 10 Laxfield Road Fressingfield Suffolk IP21 5PT diptera@sns.org.uk