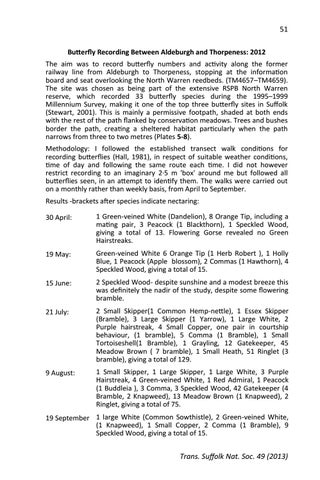 Butterfly Recording Between Aldeburgh and Thorpeness: 2012 The aim was to record butterfly numbers and activity along the former railway line from Aldeburgh to Thorpeness, stopping at the information board and seat overlooking the North Warren reedbeds. (TM4657–TM4659). The site was chosen as being part of the extensive RSPB North Warren reserve, which recorded 33 butterfly species during the 1995–1999 Millennium Survey, making it one of the top three butterfly sites in Suffolk (Stewart, 2001). This is mainly a permissive footpath, shaded at both ends with the rest of the path flanked by conservation meadows. Trees and bushes border the path, creating a sheltered habitat particularly when the path narrows from three to two metres (Plates 5-8). Methodology: I followed the established transect walk conditions for recording butterflies (Hall, 1981), in respect of suitable weather conditions, time of day and following the same route each time. I did not however restrict recording to an imaginary 2∙5 m 'box' around me but followed all butterflies seen, in an attempt to identify them. The walks were carried out on a monthly rather than weekly basis, from April to September. Results -brackets after species indicate nectaring: 30 April:

2 Speckled Wood- despite sunshine and a modest breeze this was definitely the nadir of the study, despite some flowering bramble.

Comments These months of July and August would normally, on this path, have much higher totals of species seen and numbers recorded. No nectaring was observed on flowering thistles, Hawkweed, Privet, Burdock or Hemp Agrimony, all in flower. No nectaring was observed on hemp Agrimony or fermenting blackberries. Nectaring was observed on 12 different plants, but not recorded on many others present, as indicated above. 19 butterfly species were recorded but several were in low numbers or just a single record. Those expected during my six visits, and recorded regularly during the Millennium Survey, which I did not record were: Brimstone, Small White, Green Hairstreak, Brown Argus, Common Blue, Painted Lady and Wall. I noticed no depreciation in the habitat and though this was a disappointing study it accurately reflected what Parker (2012) concluded was for most Suffolk species ‘an awful butterfly season’, with ‘chaotic’ weather which further depleted wild stock of eggs, larvae, pupae and adult butterflies’ References Hall, M. L. (1981). Butterfly Monitoring Scheme-instructions for independent recorders. ITE, Abbots Ripton, Huntingdon. Parker, R. (2012). 2012 Butterfly Conservation Report. Suffolk Argus 55:7-9. Stewart, R. G. (2001). The Millennium Atlas of Suffolk Butterflies. Suffolk Naturalists’ Society, Ipswich, Suffolk. Richard Stewart ‘Valezina’, 112 Westerfield Road, Ipswich, Suffolk IP4 2 XW Small Copper aberration: 2012 records The Small Copper aberration caeruleopunctata is a form with a series of blue spots, normally ranging from one to four, along the bottom edge of each hindwing. The aberration is often overlooked as the Small Copper is easy to identify from a distance whereas the blue spots are usually only evident from close inspection. Records from 2012 all featured just one butterfly:

The two records from Christchurch Park were both from the north end where management policy now includes leaving long swathes of uncut grass until late in the year. These areas have encouraged the spread of Yarrow, which is a favoured nectar source for the Small Copper. Richard Stewart

Plate 5: An old railway cabin on the right of the path from Aldeburgh to Thorpeness indicates its former use. (p. 51).

Plate 6: Much of the path from Aldeburgh to Thorpeness is bordered by conservation meadows. (p. 51).

Plate 7: The narrow parts of the path from Aldeburgh to Thorpeness create a warm and sheltered habitat for insects. (p. 51).

Plate 8: Shaded habitat is dominant at the Thorpeness end of the old railway line. (p. 51).

Butterfly Recording Between Aldeburgh and Thorpeness: 2012

Butterfly Recording Between Aldeburgh and Thorpeness: 2012