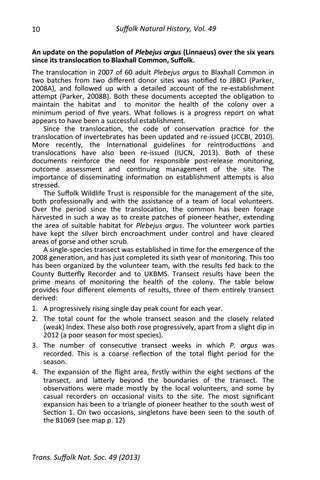 An update on the population of Plebejus argus (Linnaeus) over the six years since its translocation to Blaxhall Common, Suffolk. The translocation in 2007 of 60 adult Plebejus argus to Blaxhall Common in two batches from two different donor sites was notified to JBBCI (Parker, 2008A), and followed up with a detailed account of the re-establishment attempt (Parker, 2008B). Both these documents accepted the obligation to maintain the habitat and to monitor the health of the colony over a minimum period of five years. What follows is a progress report on what appears to have been a successful establishment. Since the translocation, the code of conservation practice for the translocation of invertebrates has been updated and re-issued (JCCBI, 2010). More recently, the International guidelines for reintroductions and translocations have also been re-issued (IUCN, 2013). Both of these documents reinforce the need for responsible post-release monitoring, outcome assessment and continuing management of the site. The importance of disseminating information on establishment attempts is also stressed. The Suffolk Wildlife Trust is responsible for the management of the site, both professionally and with the assistance of a team of local volunteers. Over the period since the translocation, the common has been forage harvested in such a way as to create patches of pioneer heather, extending the area of suitable habitat for Plebejus argus. The volunteer work parties have kept the silver birch encroachment under control and have cleared areas of gorse and other scrub. A single-species transect was established in time for the emergence of the 2008 generation, and has just completed its sixth year of monitoring. This too has been organized by the volunteer team, with the results fed back to the County Butterfly Recorder and to UKBMS. Transect results have been the prime means of monitoring the health of the colony. The table below provides four different elements of results, three of them entirely transect derived: 1. A progressively rising single day peak count for each year. 2. The total count for the whole transect season and the closely related (weak) Index. These also both rose progressively, apart from a slight dip in 2012 (a poor season for most species). 3. The number of consecutive transect weeks in which P. argus was recorded. This is a coarse reflection of the total flight period for the season. 4. The expansion of the flight area, firstly within the eight sections of the transect, and latterly beyond the boundaries of the transect. The observations were made mostly by the local volunteers, and some by casual recorders on occasional visits to the site. The most significant expansion has been to a triangle of pioneer heather to the south west of Section 1. On two occasions, singletons have been seen to the south of the B1069 (see map p. 12)

One additional element became available in 2013, through the co-operation of Dr Neil Ravenscroft, a professional ecologist living in Blaxhall. He conducted an independent assessment of the flight areas, walked three mini transects and extrapolated the likely population of the entire site to something in the order of 900. This is materially higher than the sum of the peak one-day transect count and the highest off-transect count (160 + 51=211), and may be optimistic. It caters for the incomplete detectability of butterflies in the heather habitat not visited by the transect route.

Notes 1. The 2013 season started late and was compressed to six transect weeks, with mass emergence pushing peak single day count to 160. 2. Simplified to transect weeks; when earlier or later sightings arose these extended the flight period, but are ignored here for consistency. 3. Off-transect sightings varied from year to year. In 2012, the 51 counted off transect were present a week before the peak count of 160. It is clear from the table that the establishment attempt got off to a very satisfactory start and this was featured in Antenna (Parker, 2012). The two donor sites have also been monitored, and show no evidence of damage following the donation. The receiving site passed the fragile three to five-year danger zone, and the results for 2013 look re-assuring by every measure. However, there is no cause for complacency; regular habitat management remains a key requirement if this colony is to continue to thrive. Fortunately the motivation of everyone involved remains strong.