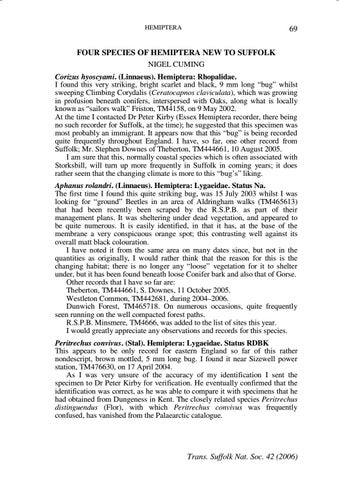 FOUR SPECIES OF HEMIPTERA NEW TO SUFFOLK NIGEL CUMING Corizus hyoscyami. (Linnaeus). Hemiptera: Rhopalidae. I found this very striking, bright scarlet and black, 9 mm long “bug” whilst sweeping Climbing Corydalis (Ceratocapnos claviculata), which was growing in profusion beneath conifers, interspersed with Oaks, along what is locally known as “sailors walk” Friston, TM4158, on 9 May 2002. At the time I contacted Dr Peter Kirby (Essex Hemiptera recorder, there being no such recorder for Suffolk, at the time); he suggested that this specimen was most probably an immigrant. It appears now that this “bug” is being recorded quite frequently throughout England. I have, so far, one other record from Suffolk; Mr. Stephen Downes of Theberton, TM444661, 10 August 2005. I am sure that this, normally coastal species which is often associated with Storksbill, will turn up more frequently in Suffolk in coming years; it does rather seem that the changing climate is more to this “bug’s” liking. Aphanus rolandri. (Linnaeus). Hemiptera: Lygaeidae. Status Na. The first time I found this quite striking bug, was 15 July 2003 whilst I was looking for “ground” Beetles in an area of Aldringham walks (TM465613) that had been recently been scraped by the R.S.P.B. as part of their management plans. It was sheltering under dead vegetation, and appeared to be quite numerous. It is easily identified, in that it has, at the base of the membrane a very conspicuous orange spot; this contrasting well against its overall matt black colouration. I have noted it from the same area on many dates since, but not in the quantities as originally, I would rather think that the reason for this is the changing habitat; there is no longer any “loose” vegetation for it to shelter under, but it has been found beneath loose Conifer bark and also that of Gorse. Other records that I have so far are: Theberton, TM444661, S. Downes, 11 October 2005. Westleton Common, TM442681, during 2004–2006. Dunwich Forest, TM465718. On numerous occasions, quite frequently seen running on the well compacted forest paths. R.S.P.B. Minsmere, TM4666, was added to the list of sites this year. I would greatly appreciate any observations and records for this species. Peritrechus convivus. (Stal). Hemiptera: Lygaeidae. Status RDBK This appears to be only record for eastern England so far of this rather nondescript, brown mottled, 5 mm long bug. I found it near Sizewell power station, TM476630, on 17 April 2004. As I was very unsure of the accuracy of my identification I sent the specimen to Dr Peter Kirby for verification. He eventually confirmed that the identification was correct, as he was able to compare it with specimens that he had obtained from Dungeness in Kent. The closely related species Peritrechus distinguendus (Flor), with which Peritrechus convivus was frequently confused, has vanished from the Palaearctic catalogue.

Brachycarenus tigrinus (Schilling). Hemiptera: Rhopalidae. Status Vagrant Mr Jerry Bowdrey drew my attention to this species very recently, when he discovered an example that he had initially misidentified in his own reference collection. The overall colour is pale straw with numerous black markings, the head, pronotum and scutellum are strongly punctured, with prominent erect pubescence, length approx 6Âˇ8 mm. It was found at Bawdsey Ferry, TM3337, on 16 August 2005. It landed on the arm of Mrs. C. Bowdrey. The species was described as new to Britain by R. A. Jones (2004). It may be another species that we may find more frequently, due to changes in our climate? Acknowledgements R.S.P.B. Minsmere and North Warren; for access to their reserves. Mr. Stephen Downes, for his excellent photographs and records. Dr Peter Kirby, for his help with identifications and communications. Mr. Jerry Bowdrey Curator of Natural History Colchester Museum Services, for access to the Entomological collections and for his help in assisting with identifications. Martin Sanford, (S.B.R.C. Ipswich), for lists of Suffolk Hemiptera. References Southwood, T. R. E. & Leston, D. (1959). Land and Water Bugs of the British Isles, Warne & Co Ltd. Jones, R. A. (2004). Brachycarenus tigrinus (Schilling) (Hemiptera: Rhopalidae) new to Britain. British Journal of Entomology and Natural History, 17: 137. Kirby, P. (1992). A review of the scarce and threatened Hemiptera of Great Britain. Joint Nature Conservation Committee. Nigel Cuming 33 Holly Road Stanway Colchester Essex CO3 0QL