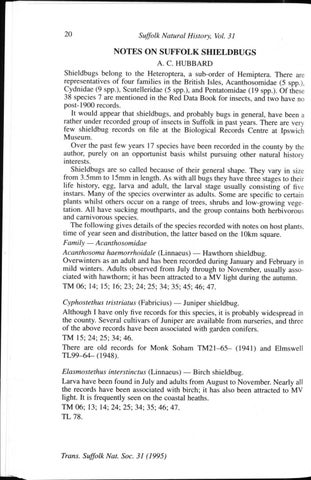 NOTES ON SUFFOLK SHIELDBUGS A. C. HUBBARD Shieldbugs belong to the Heteroptera, a sub-order of Hemiptera. There are representatives of four families in the British Isles, Acanthosomidae (5 spp.), Cydnidae (9 spp.), Scutelleridae (5 spp.), and Pentatomidae (19 spp.). Of these 38 species 7 are mentioned in the Red Data Book for insects, and two have no post-1900 records. It would appear that shieldbugs, and probably bugs in general, have been a rather under recorded group of insects in Suffolk in past years. There are very few shieldbug records on file at the Biological Records Centre at Ipswich Museum. Over the past few years 17 species have been recorded in the county by the author, purely on an Opportunist basis whilst pursuing other natural history interests. Shieldbugs are so called because of their general shape. They vary in size from 3.5mm to 15mm in length. As with all bugs they have three stages to their life history, egg, larva and adult, the larval stage usually consisting of five instars. Many of the species overwinter as adults. Some are specific to certain plants whilst others occur on a ränge of trees, shrubs and low-growing Vegetation. All have sucking mouthparts, and the group contains both herbivorous and carnivorous species. The following gives details of the species recorded with notes on host plants, time of year seen and distribution, the latter based on the 10km Square. Family — Acanthosomidae Acanthosoma haemorrhoidale (Linnaeus) — Hawthorn shieldbug. Overwinters as an adult and has been recorded during January and February in mild winters. Adults observed from July through to November, usually associated with hawthorn; it has been attracted to a MV light during the autumn. TM 06; 14; 15; 16; 23; 24; 25; 34; 35; 45; 46; 47. Cyphostethus tristriatus (Fabricius) — Juniper shieldbug. Although 1 have only five records for this species, it is probably widespread in the county. Several cultivars of Juniper are available from nurseries, and three of the above records have been associated with garden conifers. TM 15; 24; 25; 34; 46. There are old records for Monk Soham T M 2 1 - 6 5 - (1941) and Elmswell T L 9 9 - 6 4 - (1948). Elasmostethus interstinctus (Linnaeus) — Birch shieldbug. Larva have been found in July and adults from August to November. Nearly all the records have been associated with birch; it has also been attracted to MV light. It is frequently seen on the coastal heaths. TM 06; 13; 14; 24; 25; 34; 35; 46; 47. TL 78.

It is evident that considerably more recording of shieldbugs needs to be carried out to determine their distribution within the county. Many shieldbugs are associated with common plants, so it would seem logical to assume that certain species should be more widespread. Acknowledgements I thank Howard Mendel and Martin Sanford for allowing me access to the records held at the Biological Records Centre, Ipswich Museum. References Shirt. D. B„ (1987). British Red Data Books: 2. Insects. Southwood. T. R. E. & Leston. D„ (1959). Land and Water Bugs ofthe Isles. Frederick Warne. London. (Wayside & Woodland Series).

A. C. Hubbard, Treetops, Common Lane, Bromeswell, Woodbridge, Suffolk IP12 2PQ New Woodlice for Suffolk Two species of woodlice, new to Suffolk, have been found recently. The two species are Trichoniscoides sarsi and Trachelipus rathkei. T. sarsi - a small (4 mm) white woodlouse, flushed orange-pink, with red eyes - is a soil-dwelling species that may be found by turning over embedded stones. It is a synanthropic species, which until now had only been found in Kent, Leicestershire, Oxford and Dublin. T. sarsi is considered to be an old introduction to Bntain, and has been found in gardens, churchyards and nurseries. T. sarsi was found in the grounds of Otley College (TM 200540) about 30m from a glasshouse, beneath an embedded piece of concrete, on September 2Ist, 1994. Since then it has been found at a further five sites: the churchyard, Stowupland (TM 0760), December 4th, 1994; churchyard Thorndon (TM 1469), December 20th. 1994; churchyard Brundish (TM 2769), December 28th, 1994; churchyard Blythburgh (TM 4575), February 26th, 1995; a streamside. Blyford (TM 4276), February 26th, 1995. T. rathkei is a medium-sized woodlouse (15 mm) that is dark grey in colour and mottled with orange and light grey patches. This species is found from south-east England to the Midlands, in a ränge of habitats, including rough grassland, d.sused ironstone quarries and marshland, In Suffolk this species has been tound under dnft material in the flood meadow of the Little Ouse River 8th °n , " ' " 4 ' a n d a l o n S a stream-side in the River Deben flood piain at Ash Abbey (TM 315545), on March 12th, 1995. Both species are probably more widespread in Suffolk and I hope to prove this tn the future. I thank Dr. David Bilton o f t h e British Isopod Survey Group tor conhrming the T. sarsi specimens. Hopkin S. P. (1991). A Key to the Woodlice of Britain and Ireland. Field Studies Council, Aidgap Key.