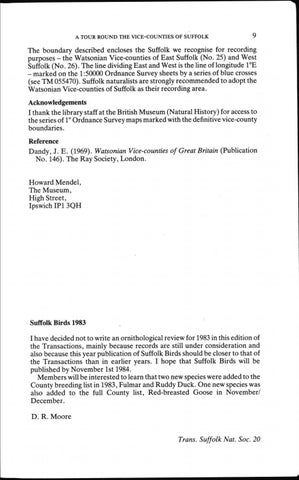 A TOUR ROUND THE VICE-COUNTIES OF SUFFOLK

The boundary described encloses the Suffolk we recognise for recording purposes - the Watsonian Vice-counties of East Suffolk (No. 25) and West Suffolk (No. 26). The line dividing East and West is the line of longitude 1Â°E - marked on the 1:50000 Ordnance Survey sheets by a series of blue crosses (see TM 055470). Suffolk naturalists are strongly recommended to adopt the Watsonian Vice-counties of Suffolk as their recording area. Acknowledgements I thank the library staff at the British Museum (Natural History) for access to the series of 1" Ordnance Survey maps marked with the definitive vice-county boundaries. Reference Dandy, J. E. (1969). Watsonian Vice-counties of Great Britain (Publication No. 146). The Ray Society, London.

Suffolk Birds 1983 I have decided not to write an ornithological review for 1983 in this edition of the Transactions, mainly because records are still under consideration and also because this year publication of Suffolk Birds should be closer to that of the Transactions than in earlier years. I hope that Suffolk Birds will be published by November Ist 1984. Members will be interested to learn that two new species were added to the County breeding list in 1983, Fulmar and Ruddy Duck. One new species was also added to the fĂźll County list, Red-breasted Goose in November/ December. D. R. Moore Trans. Suffolk Nat. Soc. 20

Grey squirrel swimming a ditch On September lOth 1983, whilst Walking along the northern edge of Martlesham Creek, I saw what I thought was a young coypu swimming across a ditch. To my amazement, when the creature emerged on the far bank I saw that it was a grey squirrel. It shook itself dry and ran across the adjoining marsh into thick cover. D. R. Moore. Trans. Suffolk Nat. Soc. 20

Horn-tails and ichneumonid parasites On 22nd June, 1983, my neighbour, Mrs. Joan Galwey, brought me an ichneumonflywhich I thought was a female Rhyssa persuasoria (L.), which parasitises Sirexgigas L. I exhibited it, together with a specimen of its host, at the annual exhibition of the British Entomological and Natural History Society where it was seen by Dr. Mark Shaw of the Royal Scottish Museum, Edinburgh. He thought it was not R. persuasoria, and eventually identified it as Dolichmitus mesocentrus (Gravenhorst), another ichneumonid within the Pimplinae, although in another tribe. As they had no specimen of D. mesocentrus in his museum I donated this one and was sent a genuine R. persuasoria in exchange. D. mesocentrus is known to parasitise wood-borin insect larvae, probably of beetles in the Cerambycidae (longhorn beetles) and maybe also lepidoptera like Sesiidae (clearwings). The female S. gigas, the greater horn-tail (commonly called the woodwasp because of its yellow and black striped body and sting-like ovipositor) bores holes infirtrees with its strong ovipositor and deposits her eggs therein. On hatching these produce whitish, six-legged larvae which spend the next few years (seldom less than two years) boring tunnels and eating the wood so displaced. When the female R. persuasoria (whose scientific name can be translated as 'persuasive burglar') is looking for somewhere to lay her eggs she seeks out a tunnel containing a Sirex larva, and with her very long ovipositor deposits an egg in the tunnel. The resulting larva eventually hatches out and proceeds to feed on the Sirex larva. There is another very small parasite which may creep into the burrow and feed upon the Rhyssa larva. As in the old proverb - 'Littlefleashave lesserfleasupon their back to bite 'em, and these in turn have lesserfleas,and so ad infinitum.' H. E. Chipperfield, Walberswick. Trans. Suffolk Nat. Soc. 20

D1D APHIDS COME TO SUFFOLK FROM THE CONTINENT IN

A batch of bird fleas On 6th April, 1983, a bright, sunny day, Eleanor, my wife was in our garden in Bury St. Edmunds when her eye was caught by an unusual shimmering effect in front of a disused nesting box fixed to an old apple tree. It was caused by living fleas caught in a spider's web an inch or so from the entrance hole. Light was being reflected from the fleas as they struggled to escape. I was able to collect more than 40 fleas on this occasion, and more the next day. The nesting box had come from another site and not been used for more than one year. The identity of its last occupant to make a nest there is not known unfortunately. The fleas were identified by Mr. Ian Simmons at the Ipswich museum as Ceratophyllus gallinae (Schrank), a common bird flea. Clearly they had been roused by the warmer weather and, finding nothing in their nest box, were attempting to leave for pastures new. The Suffolk Biological Records Centre at Ipswich Museum is gathering data on all forms of wildlife throughout the county, including fleas. Mr. Simmons would be grateful for fleas from any birds or mammals. They should be sent to the museum accompanied by relevant data. Disused nests would also be appreciated, as these often harbour fleas. They are best sent in plastic bags to prevent fleas and any other inhabitants escaping. Dr. G. D. Heathcote, Bury St. Edmunds.

Rocky Mountain Sage, Lanceleaf or Mint-weed Salvia reflexa Hรถrnern. (= S. lanceolata Brouss.) A small specimen of Salvia from a Stowmarket garden in 1976, at that time determined as S. triloba L. f., has now been identified by Mr. E. J. Clement as S. reflexa Hรถrnern. A native of North America, it occurs in Britain as a casual on rubbish tips, in arablefieldsand gardens from waste bird-seed. First recorded in Britain at Fritton, Norfolk in 1928. The plant is now a troublesome weed in Australia and elsewhere and is poisonous to livestock. This Suffolk record is believed to be the first for the County. F. W. Simpson. Trans. Suffolk Nat. Soc. 20

THE FORMATION OF SUB-GLACIAL BURTED CHANNELS

A nest of the Norwegian Wasp A wasp nest, a good deal larger than a cricket ball, was made about 12 ft above the ground in a laburnum tree within 200 yds of the beach at the Bawdsey end of Felixstowe in 1982. The wasps were identified by Mr. M. C. Day of the British Museum (Natural History) in London as Norwegian wasps, Dolichovespula norwegica (Fabr.). This record is in line with old records mentioned by Heathcote (1983) and indicate that the Suffolk coast is still a definite habitat of the species. Reference Heathcote, G . D . (1983). Social wasps in Suffolk. Trans. Suffolk Nat. 19, 343.

Bird versus bat Walking in Felsham woods on 27th September, 1983, at about 6 pm, on the path along the edge of Fishpond Fell, we heard a loud squeaking and fluttering in the field next to Bottom Fell. When we reached an opening to the field we saw a kestrel chasing a bat. The bat was weaving and circling in a figure of eight, keeping below treeptop height. The kestrel was about a metre behind and they were Aying fairly fast. We watched for about a minute. The kestrel then veered off into the reserve (it may have seen us) and the bat flew towards us. Leslie Acker & Peter Woodhouse Dr. R. E. Stebbings of the Institute of Terrestrial Ecology, an authority on bats, comments: I suspect many more people see bats being chased by birds than we hear about, so perhaps one could make the plea for people to write in with any such records which normally occur in March/April/May, rather than the end of the year.