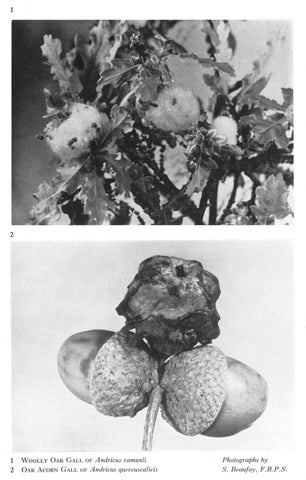 THE very dry and hot summer of 1976 favoured the various insects and parasites which produce the numerous galls observed on Oaks, distorting buds, catkins, leaves and acorns. Although the conditions appeared unfavourable for normal tree growth, the general crop of acorns was the finest ever seen and many trees bore acorns which were very much larger than normal. The chief insects producing oak galls are the gall-wasps, Cynipidae (Hymenoptera). These gall-wasps are preyed upon by various parasites and the galls may also be the abode or communal home of a number of creatures, which obtain their nourishment from the gall tissues. The life histories of many of the creatures are often very complicated. In May, S. Beaufoy found the Woolly or Cotton Gall on the staminate catkins of Quercus robur at Belstead. This gall is produced by the gall-wasp, Andricus ramuli L. It has the appearance of tufts of white cotton wool, but does not last in this condition for longer than a week and soon shrinks and changes colour to a dirty yellowish-brown. This gall is said to be more frequent on Q. petraea, which is uncommon in Suffolk. Düring July, Mrs. E. Hyde showed me acorns of Q. robur from a tree in Woolverstone Park, which had become distorted by the gall-wasp, Andricus quercuscalicis (Burgsdorff). It was also observed at Freston, Purdis Heath and Butley by N. R. Kerr, and I found it at Playford and Harkstead. It is likely that it was widespread in the County. The gall has no common English name. It has been well-known on the Continent and in the Channel Islands for many years. There has been an invasion by the gall-wasp, possibly wind borne, in some districts of Southern England from about 1960 and it has been recorded in various sites in Norfolk in recent years. Another now very frequent oak gall, which I have often been asked to identify, is the Artichöke or Hop Gall, caused by the agamic female gall-wasp, Andricus fecundator Hartig. The wasp places fertilised eggs in buds, which cause them to develop to a size of about 2 cm. long, with enlarged overlapping bud scales. The gall then has the appearance of a miniature artichöke, although I think more resembling the head of Black Knapweed. Oak Apple Day, May 29th, is usually, but wrongly, thought to commemorate the escape of Charles II by hiding in the branches of an oak tree after the Battie of Worcester, which took place on September 3rd! In fact, the May date commemorates the Restoration of the Monarchy in 1660. F. W. Simpson, The Museum, High Street, Ipswich.