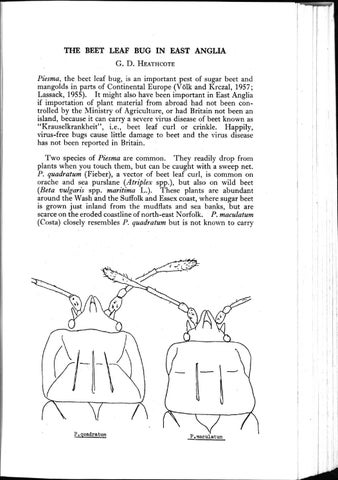 Piesma, the beet leaf bug, is an important pest of sugar beet and mangolds in parts of Continental Europe (Volk and Krczal, 1957; Lassack, 1955). It might also have been important in East Anglia if importation of plant material from abroad had not been controlled by the Ministry of Agriculture, or had Britain not been an island, because it can carry a severe virus disease of beet known as "Krauselkrankheit", i.e., beet leaf curl or crinkle. Happily, virus-free bugs cause little damage to beet and the virus disease has not been reported in Britain. Two species of Piesma are common. They readily drop from plants when you touch them, but can be caught with a sweep net. P. quadratum (Fieber), a vector of beet leaf curl, is common on orache and sea purslane (Atriplex spp.), but also on wild beet (Beta vulgaris spp. maritima L.). These plants are abundant around the Wash and the Suffolk and Essex coast, where sugar beet is grown just inland from the mudflats and sea banks, but are scarce on the eroded coastline of north-east Norfolk. P. maculatum (Costa) closely resembles P. quadratum but is not known to carry

beet leaf curl. It occurs mostly on sandy soil inland, feeding on fat hen and other Chenopodium spp., and has been trapped in sugar-beet fields in all eastern counties, e.g., near Barrow (Suffolk), Wormegay (Norfolk), White Colne (Essex), Shelford (Cambs.), Ramsey (Hunts), Harpenden (Herts.), Woburn (Beds.), and Fosdyke (Lines.). When beet leaf bugs migrate they are attracted to yellow and are caught on the sticky traps used by Broom's Barn Experimental Station to study the flight of aphids. Most are caught in May and June, but never in large numbers in sugar-beet fields in Britain (Heathcote, 1969). The sexes are caught in equal numbers (e.g., twenty-two twenty-three in a sample from several sites). P. maculatum can be found on sugar beet growing on heavy soils, but I have not found P. quadratum on sugar beet more than a mile from the sea-shore even when growing on sandy soil. Both species are small (2|-3 mm.), dull greyish and flattened, with a lace-like upper surface and characteristic spines in front of the eyes. Male Piesma can call their mates (stridulate) by rubbing a thickened area on the hindwing against ridges on the abdomen. Many bugs (e.g., Corixa, the water bug) have similar noisemaking struetures. P. quadratum is more-or-less spotted and has three longitudinal ridges (carinae) on the thorax, which is smoothly convex at the sides, but P. maculatum has distinet black spots and only two ridges on the thorax, and the thorax is indented at the sides. There are other, equally small, differences (Southwood and Leston, 1959). Bugs hibernate in vegetable debris and begin to fly when the temperature rises above 19Â°C and have been caught on sticky traps from the first week of May in East Anglia. Eggs are laid and stuck to stones or plant stems in late May; development from egg to adult takes about two months. The newly-mature individuals migrate in early July and a second generation may be produced when conditions are favourable. Leaf curl was first recorded in Lower Silesia in 1903 and it now occurs in a 500 mile strip across Poland and Germany. T o control the bug "trap crops" of sugar beet used to be sown early along hedgerows where infective bugs might hibernate, and later ploughed in. Nowadays the edges of fields liable to be attacked are treated with organophosphorus insecticide. T h e disease is serious and we must take care not to introduce it into Britain accidentally. A similar virus disease, "sugar beet savoy", is carried by a related bug, P. cinereum (Say) in North America (Schneider, 1964), but generally lace bugs are not as dangerous as aphids ('greenfly") as carriers of virus diseases.