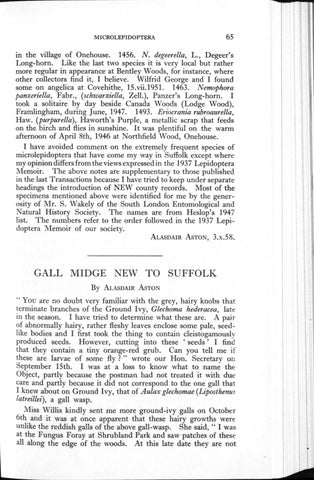 in the village of Onehouse. 1456. N. degeerella, L., Degeer's Long-horn. Like the last two species it is very local but rather more regulĂ¤r in appearance at Bentley Woods, for instance, where other collectors find it, I believe. Wilfrid George and I found some on angelica at Covehithe, 15.vii.1951. 1463. Nemophora panzeriella, Fabr., (schwarziella, Zell.), Panzer's Long-horn. I took a solitaire by day beside Canada Woods (Lodge Wood), Framlingham, during June, 1947. 1493. Eriocrania rubroaurella, Haw. (purpurella), Haworth's Purple, a metallic scrap that feeds on the birch and flies in sunshine. It was plentiful on the warm afternoon of April 8th, 1946 at Northfield Wood, Onehouse. I have avoided comment on the extremely frequent species of microlepidoptera that have come my way in Suffolk except where my opiniondiffersfrom the views expressed in the 1937 Lepidoptera Memoir. The above notes are supplementary to those published in the last Transactions because I have tried to keep under separate headings the introduction of NEW county records. Most of the specimens mentioned above were identified for me by the generosity of Mr. S. Wakely of the South London Entomological and Natural History Society. The names are from Heslop's 1947 list. T h e numbers refer to the order followed in the 1937 Lepidoptera Memoir of our society. ALASDAIR ASTON, 3.x.58.

" You are no doubt very familiar with the grey, hairy knobs that terminate branches of the Ground Ivy, Glechoma hederacea, late in the season. I have tried to determine what these are. A pair of abnormally hairy, rather fleshy leaves enclose some pale, seedlike bodies and I first took the thing to contain cleistogamouslv produced seeds. However, cutting into these ' seeds' I find that they contain a tiny orange-red grub. Can you teil me if these are larvae of some fly ? " wrote our Hon. Secretary on September 15th. I was at a loss to know what to name the Object, partly because the postman had not treated it with due care and partly because it did not correspond to the one gall that I knew about on Ground Ivy, that of Aulax glechomae (Liposthenu! latreillei), a gall wasp. Miss Willis kindly sent me more ground-ivy galls on October 6th and it was at once apparent that these hairy growths were unlike the reddish galls of the above gall-wasp. She said, " I was at the Fungus Foray at Shrubland Park and saw patches of these all along the edge of the woods. At this late date they are not

as large and fĂźll as they were a month ago and I wonder whether the grubs have escaped. (On investigation they had not.) I notice, too, that in most cases the terminal pair of leaflets have grown and become more or less normal leaves. Earlier they were very fleshy, hardly recognisable as leaves and very thickly covered with hairs." Enquiry at the British Museum revealed that two species of Cecidomyiidae or gall-midges are to be found on ground ivy, the present one being Dasyneura glechomae, KiefFer, which seems not to have been recorded from Suffolk previously. The Suffolk Cecidomyiidae are listed in our Transactions for 1948, Vol. VI, p. 173, where Mr. Morley considered the family ill-worked in Suffolk. He concluded that our total of 28 could be easly extended from among the 500 British Species. The total has now risen to 600. The other ground ivy Gall-midge is Rondaniola bursaria, Brem., also called the Lighthouse Gall-midge. Mr. Morley thought it to be ubiquitous in Suffolk. From a diagram in a recent Scandinavian book at the British Museum it appears that the Lighthouse Gall-midge erects elongated galls on the surface of the leaf, leaving a small hole beside each " lighthouse ". The Cecidomyiidae are mainly gall-makers but it seems that some are parasitic upon insects, in some cases upon other species of Cecidomyiidaeâ&#x20AC;&#x201D;it appears rather a case at this stage of " Big bugs have lesser bugs upon their backs to bite 'em." Miss Willis is to be congratulated upon discovering this new dipteron with us. In her original letter she wrote, " I have searched all my Standard works on botany for any mention of this quite common abnormality (?) and suppose it is left to the entomologists to discuss it." Quite, but it is left for the botanists to discover ! All further galls gratefully received. 1 Aysgarth Road, Dulwich Village, S.E.21. T h i r d Golden Hoverer. Callicera spinolae, Rondani, was introduced as British in the Transactions of our Society for 1942. Mr. Morley caught a specimen on angelica in September, 1942, when working the Brandeston Marshes and a second one on ivy at Monks Soham in September, 1947. It now appears that anotl^er British specimen of this splendid fly has been caught, again in Suffolk, to-date its only British home. There is a female in the Royal Scottish Museum collection caught on October Ist, 1928 by J. W. Bowhill at Southwold, Suffolk. The capture is mentioned by R. L. Coe in his Syrphidae section of the Royal Entomological Society of London's Handbooks for the Identification of British Insects, 1953. All three British specimens have been female. A.A.