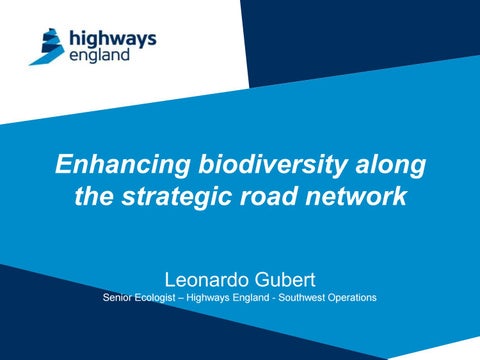 Roads and the Natural Environment ▪ Roads cut through virtually every terrestrial ecosystem in the world and have become a permanent part of the landscape. ▪ Roads have a great ecological impact on the environment. ▪ However, with the increasing loss of biodiversity throughout the world, road verges have attracted much attention and have become important areas of conservation as they often hold the only connection with the past natural ecosystems.

The importance of road verges ▪

Often is the best quality habitat in the area and the only link to past landscapes.

Can be of particular ecological value especially when adjacent to designated areas.

Can be of high aesthetic value. For some road users, road verges offer the only connection to natural environment.

The soft side of Highways England’s estate

▪ In the UK, the total area of road verge habitat, or ‘soft estate’, is considerable, occupying around 178,000 ha in England and Wales. In England, the area of soft estate managed by Highways England along motorways and trunk roads (often referred to as the strategic road network) covers an area of approximately 30,000 ha that includes a wide range of species and habitats.

The importance of road verges

The importance of road verges

So, is it a matter of management?

In the Southwest Region, Highways England have been implementing a Grassland Management Programme (GMP) across its road network in Devon and Cornwall since 2002 (Gubert, 2017). The GMP is reviewed each year, enabling biodiversity and landscape commitments to be met whilst at the same time providing best value for money. The Area 1 GMP is now fully GIS-based. The GMP identifies all aesthetic and species-rich grasslands within the soft estate that require specific management and provides cyclic, prescriptive management recommendations for individual grassland plots based on previous surveys and habitat mapping exercises.

Gubert, L (2017). Managing roadside grasslands along the trunk roads of southwest England. In Practice – Bulletin of the Chartered Institute of Ecology and Environmental Management, 96 pp 19-23.

How easy is the management? Are the steep slopes suitable for personnel and machinery?

How easy is the management?

Biodiversity Conservation Initiatives Pollinator Studies: A baseline survey carried out with the assistance of Buglife to help Highways England fulfil their commitment to support The National Pollinator Strategy as well as their own Biodiversity Plan. This study covered a variety of roadside habitats and contributes to the way roadside verges are managed. In total, 866 taxa were recorded including 32 different species of bees, 16 nationally scarce species, 4 species of principal importance and 1 endangered species.

Biodiversity Conservation Initiatives iTree Study: An analysis of the trees in the soft estate in Devon and Cornwall. By combining field collected information with local phenological, climate and pollution data, it is capable of calculating the function and a range of benefits (ecosystem services) provided by the soft estate.

Biodiversity Conservation Initiatives Habitat connectivity at landscape scale: Tree and hedge planting: around 10,000 native trees and shrubs planted to enhance connectivity and provide habitat for birds, mammals and insects in Devon and Cornwall.

So, the road to biodiversity?