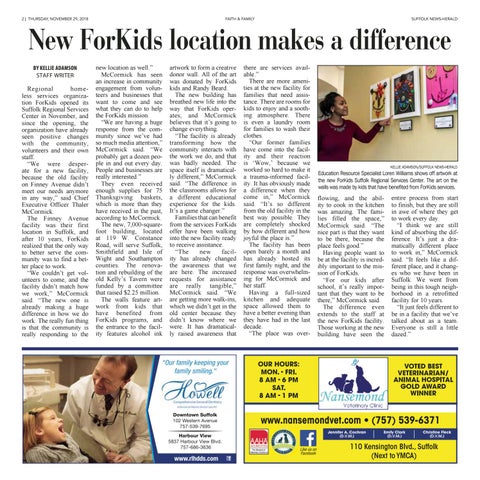 Regional homeless services organization ForKids opened its Suffolk Regional Services Center in November, and since the opening, the organization have already seen positive changes with the community, volunteers and their own staff. “We were desperate for a new facility, because the old facility on Finney Avenue didn’t meet our needs anymore in any way,” said Chief Executive Officer Thaler McCormick. The Finney Avenue facility was their first location in Suffolk, and after 10 years, ForKids realized that the only way to better serve the community was to find a better place to work. “We couldn’t get volunteers to come, and the facility didn’t match how we work,” McCormick said. “The new one is already making a huge difference in how we do work. The really fun thing is that the community is really responding to the

new location as well.” McCormick has seen an increase in community engagement from volunteers and businesses that want to come and see what they can do to help the ForKids mission. “We are having a huge response from the community since we’ve had so much media attention,” McCormick said. “We probably get a dozen people in and out every day. People and businesses are really interested.” They even received enough supplies for 75 Thanksgiving baskets, which is more than they have received in the past, according to McCormick. The new, 7,000-squarefoot building, located at 119 W. Constance Road, will serve Suffolk, Smithfield and Isle of Wight and Southampton counties. The renovation and rebuilding of the old Kelly’s Tavern were funded by a committee that raised $2.25 million. The walls feature artwork from kids that have benefited from ForKids programs, and the entrance to the facility features alcohol ink

artwork to form a creative donor wall. All of the art was donated by ForKids kids and Randy Beard. The new building has breathed new life into the way that ForKids operates, and McCormick believes that it’s going to change everything. “The facility is already transforming how the community interacts with the work we do, and that was badly needed. The space itself is dramatically different,” McCormick said. “The difference in the classrooms allows for a different educational experience for the kids. It’s a game changer.” Families that can benefit from the services ForKids offer have been walking into the new facility ready to receive assistance. “The new facility has already changed the awareness that we are here. The increased requests for assistance are really tangible,” McCormick said. “We are getting more walk-ins, which we didn’t get in the old center because they didn’t know where we were. It has dramatically raised awareness that

there are services available.” There are more amenities at the new facility for families that need assistance. There are rooms for kids to enjoy and a soothing atmosphere. There is even a laundry room for families to wash their clothes. “Our former families have come into the facility and their reaction is ‘Wow,’ because we worked so hard to make it a trauma-informed facility. It has obviously made a difference when they come in,” McCormick said. “It’s so different from the old facility in the best way possible. They are completely shocked by how different and how joyful the place is.” The facility has been open barely a month and has already hosted its first family night, and the response was overwhelming for McCormick and her staff. Having a full-sized kitchen and adequate space allowed them to have a better evening than they have had in the last decade. “The place was over-

Education Resource Specialist Loren Williams shows off artwork at the new ForKids Suffolk Regional Services Center. The art on the walls was made by kids that have benefited from ForKids services.

flowing, and the ability to cook in the kitchen was amazing. The families filled the space,” McCormick said. “The nice part is that they want to be there, because the place feels good.” Having people want to be at the facility is incredibly important to the mission of ForKids. “For our kids after school, it’s really important that they want to be there,” McCormick said. The difference even extends to the staff at the new ForKids facility. Those working at the new building have seen the

entire process from start to finish, but they are still in awe of where they get to work every day. “I think we are still kind of absorbing the difference. It’s just a dramatically different place to work in,” McCormick said. “It feels like a different place, and it changes who we have been in Suffolk. We went from being in this tough neighborhood in a retrofitted facility for 10 years. “It just feels different to be in a facility that we’ve talked about as a team. Everyone is still a little dazed.” 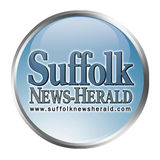