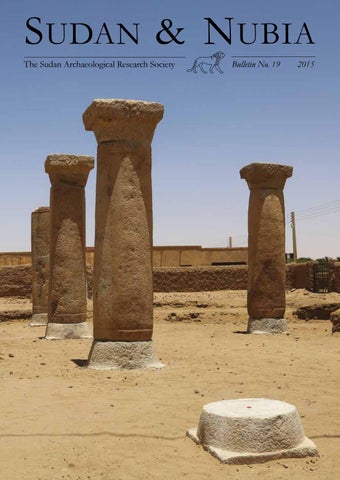 Sudan & Nubia is a peer-reviewed journal

chapel facing east (Plate 2). They were built of mud brick bonded with a whitish mortar (Plate 3). Royal and elite tombs with their substantial stone pyramid superstructures are well known and documented. However, less important tombs were also marked by mud-brick pyramids, which are on occasion accompanied by inscribed offering tables (Edwards 2004, 174). With the exception of the three tombs noted above, the cemetery at Berber shows no traces of any visible superstructures covering the graves. However, it is likely that some tombs were covered by a low mound of gravel, a common

Mahmoud Suliman Bashir and Romain David In continuation of the systematic archaeological investigation of Berber cemetery a short season in 2013 was conducted. The main objective was to carry out a geophysical survey in order to determine the size of the cemetery and to locate tomb shafts. Test excavations to confirm the magnetic survey results were also conducted and a total of four tombs were excavated. In this report we will present only one of the excavated tombs.

Magnetic Survey at Berber Cemetery and the Discovery of Tomb Superstructures Magnetic prospection was carried out using a Geoscan Fluxgate Gradiometer (FM256). The survey was conducted using a 20 x 20m square grid. The measurements within each grid were collected along parallel traverses 500mm apart with a sample interval of 250mm. The survey covered an area of about 9600m2 (c. 1 hectare) (Plate 1). The magnetic survey showed clusters, black and white in colour, indicating anomalies associated with red bricks. These are groups of graves; some of these graves contain red bricks. The anomalies are associated with graves, which are confirmed by the excavated graves nearby. The enhanced regular anomaly in E03, shown by yellow circle, is a mud-brick pyramid, as confirmed by the excavation. In fact, a total of three mud-brick pyramid foundations varying in size were discovered (Figure 1). The pyramids are square in shape and have an offering

Plate 1. Satellite image with the location of the magnetic survey area marked. 97

feature in some Meroitic cemeteries such as Gabati (Edwards 1998, 11). In fact, a low mound of gravel is covering the ground surface of the cemetery at Berber, which is clearly different from the soft sand of the surrounding area.

This tomb has been recognised by the well preserved clear mud-brick superstructure found after clearance of the surface. This is the first evidence for the presence of superstructures at the cemetery. The superstructure is the foundation of a mud-brick structure probably a pyramid (3.03m E-W x 3.1m N-S). It consisted of about three courses, with a funerary chapel located on the eastern side (Plate 4). Two tombs have been distinguished by the clear whitish colour of their fill beneath the pyramid; BMC 38a and BMC 38b. This season the excavation was concentrated only in BMC 38a.

BMC 38a In its structure this tomb has presented an axial burial type consisting of an east-west sloping descendary 5.1m long leading to an oval shaped east-west burial niche in the western

end. The fill in the descendary was a mixture of soft clay, soil and pebbles. A disturbed blocking wall revealed at a depth of 1.05m consisted of mud bricks, stones, and pebbles (Plate 98

Sudan & Nubia 5). The middle part of the wall was cut by a robber pit and the bricks had been removed. Inside the burial an articulated skeleton was found lying in an extended position on its right side oriented east-west, the head to the west facing south (Plate 6). The right hand was extended by the body and the left hand extended over the ribs and across the pelvis to rest on the right hand. The left leg was semi-flexed over the right. There are clear traces of a poorly preserved wooden coffin. Beside the skeleton on the northern side a complete well preserved copper-alloy bowl was found. A sharp blade of iron and a wooden kohl pot were found in front of the body. In this tomb a fire place located on the southern side of entrance to the chamber was found with remains of charcoal. Charcoal was also been found beneath the skeleton under the ribs and hands. A total of three radiocarbon samples of charcoal and bone from BMC 38a were collected for chronological analysis.

a sample of bone from the articulated skeleton. These samples provide valuable information on the general date of the cemetery. The three samples from BMC 38a provided early Meroitic dates: 2155 ± 30 BP (76.47 % ± 0.27, calibrated 357 to 97 BC), 2160 ± 25 BP (76.43 % ± 0.25, calibrated 356 to 111 BC), and 2170 ± 25 BP (76.32 % ± 0.24, calibrated 359 to 164 BC). The sandstone offering table with an inscription in cursive Meroitic, found in BMC 6, is considered one of the important datable objects amongst the artefacts from the cemetery. Claude Rilly studied the object and stated that the style of decoration is attested from the mid 2nd century to mid 3rd century AD (Mahmoud Suliman Bashir 2010, 73), while paleographical evidence fits with a date around the middle of the 3rd century AD. When compared with the dating derived from a study of the ceramics from BMC 6, the later dating is supported. Tombs BMC 39 and BMC 40 remain unexcavated, but they have similar square shaped structures of mud brick which have been identified and documented. Their location adjacent to BMC 38, and their similar tomb superstructures, suggest a similar date for these tombs. In tomb BMC 34, located beside BMC 38a, the three pottery jars that have been found are dated before the mid-1st century AD at the latest.

The C14 dates from BMC 38a are derived from two charcoal samples from the layer under the skeleton and the third, from

Meroitic ceramics from the necropolis of Berber and its internal chronology

The necropolis of Berber contains an exceptional number of undisturbed graves in which most of the material remains in situ. A preliminary study attempted to classify the main products encountered and to ascribe a broad chronological frame to each tomb (Mahmoud Suliman Bashir and David 2011). The links between the pottery of the well-dated tombs from the Western and the Northern Cemeteries at Meroe (Edwards 1999) as well as from Gabati (Edwards 1998) and the ceramics from Berber were particularly helpful during this first step. Further excavations provided more and more material (208 complete pots from 19 tombs), which makes possible our current progress with refining the internal chronology of the site, notably by the study of the distribution of the same products in the different tombs of the necropolis. Connections between tombs, sometimes distant from each other, are highlighted with this method. The most valuable data, recorded in Table 1, illustrates the distribution of some well-recognisable shapes within the necropolis. The tombs are arranged in sequence from what we suppose to be the earliest burial (BMC 34, Figure 2) to the possibly latest inhumation (BMC 12, see the material in Mahmoud Suliman Bashir and David 2011, fig. 6). The position of the others is determined by the similarity of their material to that of the previously mentioned graves. Nevertheless, we lack precision to ascertain the exact sequence of these burials as no stratigraphic relationship has been evidenced in the field. A general grouping is thus desireable. Grave BMC 34 is the only tomb situated on the western part of the site, close to pyramidal superstructures, from which material has

Table 1. Comparative table of the most represented ceramics.

can be provisionally dated between the late 2nd century BC and the mid 3rd century AD. However, a comparison-study with the other artifacts is still underway and better results are expected. Considering the presence of both extended and contracted burials, we notice that only the earlier inhumations contain an extended body (BMC 34, BMC 24, BMC 8 and BMC 23a). The ritual comprising bowls deposited on a basket-tray, pointed out by P. Lenoble (1991, 247), is widely followed at Berber as only two graves do not contain any exemplar. BMC 34 seems to be older than the introduction of such a custom and BMC 2 has been heavily plundered and has not been taken into account in this study.

The project is very grateful to the Sudan Archaeological Research Society for funding three seasons of fieldwork (2012, 2013 and 2015). Our thanks and gratitude also goes to Vivian Davies for his personal support of the project. The project is also very grateful to Claude Rilly, the former director of the French Unit SFDAS, for the C14 sample analysis and for funding the study of the ceramics from Berber cemetery. The project field director would like to thank the team members: Murtada Bushara (archaeologist), Mohammed Saad (archaeologist), Sami Mohammed (archaeologist), Yassin Mohammed (surveyor), Sheikh Mohammed (cook), and Dr Mohammed Abdelwahab and the geophysical survey team from Dongola University. Figure 5. Handmade jars from BMC 7 and BMC 23 – scale 1:8.

David 2011, 123-125). The last group consists of tombs dated to the 3rd century AD: BMC 6 and BMC 12. The late date of BMC 12 has already been justified (Mahmoud Suliman Bashir and David 2011, 125) and we can surely ascribe the same date range to BMC 6 as an offering table with a palaeographic style which fits with a mid 3rd century AD date (Mahmoud Suliman Bashir 2010, 73) has been found in its filling. This first attempt to date all the excavated tombs of the necropolis illustrates a general pattern in the development of the burials that does not seem to follow a linear evolution. As some tombs might have been reused or some clusters may exist such as at Sedeinga (Rilly and Francigny 2010; 2011; 2012; 2013), the chronological links between one grave and its direct neighbour may be far from evident. According to the likelihood of a similar date for BMC 34, BMC 38, BMC 39 and BMC 40, the authors suggest that graves in that area of the cemetery are earlier and may fall within the late 2nd century BC. In fact, the presence of mudbrick pyramids with offering chapels and the east-west burial tradition together with fewer or no grave goods were elements of early and middle Meroitic tombs. Therefore, in addition to the radiocarbon result we believe that the evidence for our dating of this part of the cemetery is confirmed. It is still too early to suggest an accurate date for these tombs; however, based on the available evidence, the site 104

Figure 6. Map of the necropolis of Berber.

The West Bank Survey from Faras to Gemai 1. Sites of Early Nubian, Middle Nubian and Pharaonic Age by H.-Å. Nordström London, 2014 xviii + 178 pages, 29 tables, 33 plates, 74 figures ISBN 978 1 901169 195 This volume completes the three-volume series devoted to the results of the survey and excavations conducted by the Sudan Antiquities Service between 1960 and 1963 during the UNESCO-sponsored Campaign to Save the Monuments of Nubia. The author reports in detail on the Pharaonic and earlier sites, the excavation of many of which he personally directed. Also heavily involved in the publication of the Scandinavian Joint Expedition’s work on the opposite bank, he is ideally placed to provide a synthesis of the evidence for human activity in this part of the Nile Valley, now largely inundated. Retail price £35. Available to members at the discounted price of £30 (p&p UK £4.90, overseas, Europe £9, Worldwide £15)

by Margaret A. Judd, with a contribution by David N. Edwards London 2012 xii + 208 pages, 110 tables, 15 figures, 66 maps, 73 colour plates ISBN 978 1 901169 19 7 The cemetery at Gabati, dating from the Meroitic, post-Meroitic and Christian periods was excavated in advance of road construction in 1994-5, the detailed report being published by SARS in 1998. This complementary volume provides an in-depth analysis of the human remains. A final chapter, a contribution from David Edwards, the field director of the project, in conjunction with Judd, assesses the archaeological results in light of continuing research in the region over the last decade and more.

THE PHYSICAL ANTHROPOLOGY M. A. Judd 1

Please order these books from the Honorary Secretary at the Society’s address or via the website http://www.sudarchrs.org.uk/resources/publications/