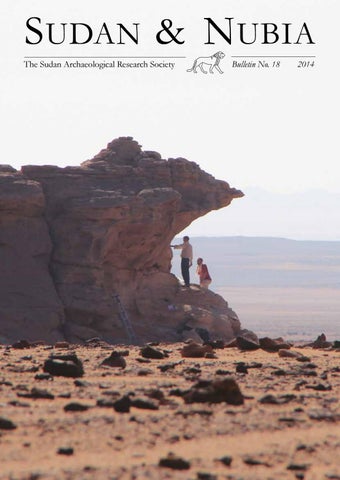 The graffiti of Musawwarat es-Sufra: current research on historic inscriptions, images and markings at the Great Enclosure Cornelia Kleinitz

The 2014 season of excavations at Kurgus

The Qatar-Sudan Archaeological Project in the Northern Dongola Reach

Archaeology in South Sudan past and present: Gordon’s fort at Laboré and other sites of interest Matthew Davies

Wad ben Naga: a history of the site Pavel Onderka

Introduction Derek A. Welsby and Ross I. Thomas

Excavations within the Kushite town and cemetery at Kawa 2013-14 Derek A. Welsby

Napatan region for an Egyptian presence is the stela dated to the reign of Thutmose III from Jebel Barkal (Reisner 1917, 3). The exact location of the fortress mentioned in Thutmose III’s stela at Jebel Barkal, on the wall of which was hung the body of one of the seven captured Asian princes by his successor Amenophis II, has not been identified (Török 2009, 165; Welsby and Welsby Sjöström 2007, 379). Its presence, however, indicates that there was an Egyptian community in Napata or in its vicinity. Recently an Egyptian inscription carved on the east side of the holy mountain of Barkal was discovered (Plates 1 and 2) half way up (facing the Nile and toward Nuri) bearing a royal titulary, the king’s name yet to be identified.1 Although there is little evidence for the presence of the Egyptians in the area between Kawa and Napata especially

Murtada Bushara Mohamed, Gamal Gaffar Abbass Elhassan, Mohammed Fath Elrahman Ahmed and Alrashed Mohammed Ibrahem Ahmed In the Napatan region there is little evidence for the presence of the Kerma culture. At Jebel Barkal pot sherds have been recovered dated to the pre-Kerma and Kerma Classique (Kendall 2002, 6) and at et-Tameer and Usli also scatters of Kerma potsherds were found (Bushara 2014, 636; Barta et al. 2013, 66). Reisner discovered two graves pre-dating the Egyptian New Kingdom at Jebel Barkal (B600). Although there is evidence for occupation before the Egyptians occupied at least part of the region no trace of settlements has been identified (Kendall 2002, 6). Downstream from Napata on the right bank of the Nile, surveys by the Sudan Archaeological Research Society, the Royal Ontario Museum and the Research Centre for Mediterranean Archaeology of the Polish Academy of Sciences, covered the area between Kawa and ez-Zuma. In the area from Kawa up to Abkur many sites of Kerma date were noted, among them those at Bugdumbush, Abkur and Banganarti (Welsby and Welsby Sjöström 2007, 380-382) while survey further upstream to ez-Zuma revealed important Kushite sites, the temples at Soniyat and el-Hugair (El-Tayeb 2012, 20). Upstream from the Napatan region in the area of the Fourth Cataract, surveys and excavations were conducted on both banks of the Nile. The Gdańsk Archaeological Museum initially covered 250km on the right bank between Kareima and Abu Hamed (Paner et al. 2006, 61; Kołosowska et al. 2003, 21), the National Corporation for Antiquities and Museums (NCAM) covered 8km on the left bank from the Dam site to Dar el-Arab (Salah Mohamed Ahmed 2003, 13) and the Sudan Archaeological Research Society covered 40km on the left bank and the islands between Amri and Kirbekan, with other missions working further upstream (Welsby 2000, 51; Borcowski and Welsby 2009, 1). A large number of Kerma sites were discovered. The presence of Kerma sites upstream and downstream from the Napatan region raises the issue of their apparent absence in that region. Although Kerma was destroyed by Thutmose I, whose campaign is known from the inscription at Tombos, and the location of the Egyptian southern boundary known from as far upstream as Kurgus where two royal inscriptions of Thutmose I and Thutmose III were found on the Hagr el-Merwa (Davies 2001, 46, 57), the earliest evidence in the

Plate 2. Detail of the inscription (photo W. V. Davies). This important discovery was made by Hatim Osman Fadel who brought it to the author’s attention.

Sudan & Nubia for cult centres, some sites which contain temples have been discovered and excavated in the Napatan region recently. The Polish Centre of Mediterranean Archaeology and the Polish Academy of Sciences discovered two temples situated some 40km from Barkal opposite each other at Usli and Hugair (Ĺťurawski 2003, 26). The Czech Institute of Archaeology, Charles University, carried out excavations at Usli on the left bank while the Jebel Barkal Museum Archaeological Mission worked at Hugair. The excavation at Usli revealed that the history of the site may be dated as far back as the New Kingdom period. The partially excavated temple, containing the base of a royal statue (Barta et al. 2013, 67, 68), was typical of Kushite temples. The temple of Hugair is different from that at Usli as the base of the sanctuary was dug into the sandstone bedrock (Plate 3). It appears that this area was used as a quarry (Plate

Plate 5. The name of King Aktisanes.

4) and then re-used to form the sanctuary. The quarrying technique, with the cutting of a narrow trench around the sides of the block to isolate it and the traces of tool-marks forming a herringbone pattern, are typical of the Kushite period, but was also used earlier during the New Kingdom Plate 6. The pyramid of King Aktisanes at Jebel Barkal, Bar.11.

The presence of some New Kingdom sites in the Napatan region poses the question of whether there were also Kerma sites. Recently one site dated to the Kerma Classique was discovered at Magashi village and excavated by a joint mission of Jebel Barkal Museum and the Department of Archaeology in the Faculty of Arts and Human Studies, University of Dongola. The cemetery at Magashi, located 24km downstream from Jebel Barkal on the right bank of the river, was found by chance during the construction of a minaret for the mosque of et-Tiwaimap. During this work some Kerma graves were discovered inside the mosque; most probably this cemetery lies both inside and outside of the mosque. Rescue excavations were conducted and three graves were excavated, all of them dug into the sandstone bedrock within the trench

Plate 4. The quarry at Hugair Temple. 27

Plate 7. General view over the 4 x 4m pit dug for the foundations of the minaret.

(4 x 4m) dug to construct the minaret (Plate 7). Some graves were destroyed completely but fragments of human bones and pottery were handed over to the Barkal Museum by the local people.

Located at the eastern side of the trench to the north of Grave M2, this grave was rectangular in shape, oriented east-west, and had been refilled with sand. The disarticulated skeleton, also oriented east-west, lay on its right side head to the east facing north in a flexed position. The male deceased wore a string of ostrich eggshell beads around the neck and the waist but no other grave goods were found. Comparing the Magashi graves with those of the Kerma Classique in the Fourth Cataract region similarities and differences can be seen. In the Fourth Cataract region most of the sites are multi-period, there is a range of burial pit forms and in the position and orientation of the deceased. The pits were usually oval or circular, but also egg-shaped or set in crevices in the natural bedrock, while the skeletons were crouched or flexed with the

most common orientations being east-west and north-south (Paner et al. 2006, 63; el-Nour et al. 2005). Other variations are north east-south west and south east-north west (el-Nour et al. 2005; Welsby and Welsby Sjรถstrรถm 2007, 387). The eastwest orientation with the head to the east facing north is the canonical arrangement at Kerma (Koลosowka 2003, 24). At Magashi the shape of the grave shaft was rectangular, the same as the non-royal graves at Kerma (Geus 2004, 279), and this form was also noticed at the Fourth Cataract in Dar el-Arab and at el-Batarin, though there the graves were shallower due to the nature of the region with the bedrock close to the surface (el-Nour et al. 2005; Welsby and Welsby Sjรถstrรถm 2007, 387).

Located at the eastern side of the trench, Grave M2 extended further to the east where, as it underlay a structure and Grave M3, we removed only the fill from inside the chamber which was of rectangular shape (1.85 x 1.1m in size). The articulated skeleton of a young adult female was in a flexed position, oriented east-west, head to the east, lying on its right side facing north and with the hands folded in front of the face. Two tulip beakers were found to the north in front of the head, one inside the other, and a small jar was behind the head. The grave was refilled with white sandstone and earth (Plate 9).

Various types of pottery were found, mainly typical Kerma Classique tulip beakers; 13 were noted along with a mediumsized jar, a small red jar, a red-polished and black-topped jar (Plate 10) and three globular jars of white colour, two of 28

which were painted (Plate 11). The three globular jars were imported from Egypt, while the fine pottery could have been imported from Kerma. Imported pottery from Kerma and Egypt has been identified at the Fourth Cataract dated to the Kerma Classique period (Kołosowska et al. 2003, 22). Imported pottery from Upper and Lower Egypt was also found in Kerma among which were ovoid/globular jars in Kerma Moyen graves (Bourriau 2004, 8).

We would like to thank the people of Magashi village for their great hospitality, our colleagues of the archaeological missions who visited and for help and support from the Nubian Archaeological Development Organization Qatar-Sudan.

Plate 10. The assemblage of complete vessels.

Plate 11. The assemblage of complete vessels.

As the majority of the pottery found was handed over by the local people we do not know its exact location in the trench, nor how many graves were disturbed but at least two individuals were recognized from the bones. It is also uncertain whether the pottery was in the same layer as the graves as the depth of the trench reached nearly 3m.

The West Bank Survey from Faras to Gemai 1. Sites of Early Nubian, Middle Nubian and Pharaonic Age by H.-Å. Nordström London, 2014 xviii + 178 pages, 29 tables, 33 plates, 74 figures ISBN 978 1 901169 195 This volume completes the three-volume series devoted to the results of the survey and excavations conducted by the Sudan Antiquities Service between 1960 and 1963 during the UNESCO-sponsored Campaign to Save the Monuments of Nubia. The author reports in detail on the Pharaonic and earlier sites, the excavation of many of which he personally directed. Also heavily involved in the publication of the Scandinavian Joint Expedition’s work on the opposite bank, he is ideally placed to provide a synthesis of the evidence for human activity in this part of the Nile Valley, now largely inundated. Retail price £35. Available to members at the discounted price of £30 (p&p UK £4.90, overseas - Europe £9, rest of world £15)

by Margaret A. Judd, with a contribution by David N. Edwards London 2012 xii + 208 pages, 110 tables, 15 figures, 66 maps, 73 colour plates ISBN 978 1 901169 19 7 The cemetery at Gabati, dating from the Meroitic, post-Meroitic and Christian periods was excavated in advance of road construction in 1994-5, the detailed report being published by SARS in 1998. This complementary volume provides an in-depth analysis of the human remains. A final chapter, a contribution from David Edwards, the field director of the project, in conjunction with Judd, assesses the archaeological results in light of continuing research in the region over the last decade and more.

THE PHYSICAL ANTHROPOLOGY M. A. Judd 1

Please order these books from the Honorary Secretary at the Society’s address or via the website http://www.sudarchrs.org.uk/resources/publications/

View upstream along the Wadi Murrat from the late 19th century Anglo-Egyptian fort. The pharaonic inscriptions are amongst the trees at the wadi edge in the far centre (photo D. A. Welsby).

Horus, Lord of the Desert. A natural rock outcrop along the route from Buhen towards Wadi Murrat (photo D. A. Welsby).