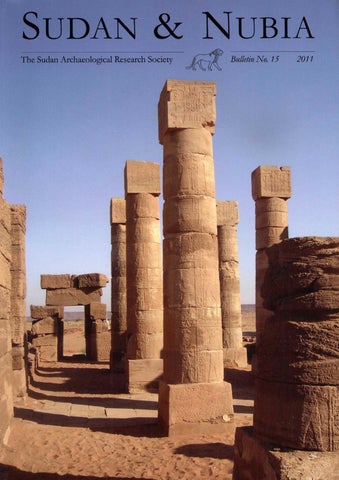 The archaeological and cultural survey of the Dongola Reach, west bank from el-Khandaq to Hannek: Survey Analysis

example was one of the multiple burials at el-Khandaq; its roof has collapsed and it was being used as a rubbish dump which led to the protrusion of skulls and skeletal remains (see Elzein 2008). Table 1. List of sites. No. 1

Intisar Soghayroun Elzein The project’s pilot plan is a re-investigation of the area surveyed by the University of California Dongola Reach expedition in January 1998, during which more than 99 sites were recorded (Smith 2002). One of the aims of the new project is to investigate the Islamic sites which may have escaped the attention of the previous missions due to time constraints. The survey was carried out by car and on foot for three seasons during 2007-2009 (Tables 1 and 2). Samples were taken from more than 90% of the surveyed area, mainly pottery sherds, a few stone objects including a smoking pipe and clay pipes. The importance of the area comes from the fact that it is the heartland of the Christian kingdom of Makuria, as well as being the area which received early Muslim settlers. The survey covered the river bank, its immediate hinterland, and two islands. Some of the sites have recently vanished without trace due to agricultural projects and modern settlements, as revealed by the 1998 survey list, which was of great help in identifying some of the sites which have since disappeared. At the end of each season signs are posted and local authorities are informed about the importance of setting up a regular police force in some sites such as el-Khandaq, where people used to come from some distance until recently to collect fertilizer from the deposits of dung within the fort’s interior (Plate 1). The police station at el-Khandaq was supported with more staff to help in this respect, for which we are thankful. In some cases rescue excavation was carried out to safeguard the threatened sites and/or to investigate collapsing or already collapsed vaulted burials. A good

The first phase lasted for three years during which the following objectives were achieved: The survey to produce the site inventory was completed by 2009. The surveyed sites are spread between the regions of el-Golid and Dongola. The boundary of the former is from

Sudan & Nubia el-Ghaba to Urbi, of the the latter from et-Teiti to Hannek. One site, on Dagarta Island, is within el-Burgaig locality. Plans were made of Qaila Qaila (the Red Fort) and of the house of Abd Allah Beyh Hamza in el-Khandaq and of the fort of Wad Nimeiri (Elzein 2008; 2010).

Analysis of the results

About 180 sites have been reported, ranging from prehistoric (a low percentage) to medieval and post-medieval sites. The sites are clustered around 25 villages.

These include mainly the cemeteries, mesids, few diffis and two castles/forts. A large percentage of these cemeteries are of qubbas and/or baniya (usually roofless rectangular or square structures, a few examples are roofed) and ordinary graves (Plate 2). In some of them is evidence of remains of khalwas

Plate 2. Cemetery with a qubba and banya (Hafir).

These remains are partially under Muslim cemeteries but there are two jalous and brick churches still standing at et-Teiti. Et-Teiti South (18º 49.430’ N / 30º 29.915’ E) is a mudbrick church with walls surviving to a height of up to 2m. It is suffering from weathering by wind and from negligence (Plate 5). It is one of the few upstanding churches of its type in the area. There are also fired brick and pottery sherds on the site.

Diffi. Remains of diffi are rare in the area, while diffi are reported in the Mahas and Sakkout areas. The most southerly example in this concession is Bad-in-deffi, famous as the diffi of King Badai of the Funj in Dambu (19º 31.650’ N / 30º 23.783’ E), good evidence for the existence of Funj control in this area. The others are in Akkad (19º 38.763’ N / 30º 22.118’ E); a mud (jalous) and mud-brick building with a crumbling tower at its north-eastern corner shows evidence of later added supporting walls and Christian pottery sherds and stone

Et-Teiti North (18º 52.626’ N / 30º 28.011’ E) Most of the remains on this site are Christian, a few standing structures, pottery sherds and remains of burnt bricks. One of the sites here, on top of a mound, has Islamic burials, but down the slope and for a considerable distance to the edge of the vehicle road is a dense scatter of Christian pot sherds, includ143

ing diagnostics. This suggests that et-Teiti was once one of the strongholds of Makuria or an important centre. Future research in the area will tell us more.

Ez-Zawrat (19º 21.202’ N / 30º 25.988’ E) In this area four sites were recorded, two of them with Christian and Islamic remains. In one of them is an Islamic cemetery apparently built above a Christian settlement. The Islamic cemetery consists of ordinary burials and roofless structures. In the Kullumesid site, a modern mosque was built next to the deserted mesid; our informants said that the ruined mesid had been built over remains of a church.

Plate 7. A rock gong at Makjour.

El-Khandaq. A medieval and post-medieval town, famous as a river port during the late 18th and all of the 19th century, until the middle of the 20th century. Its fort (Plate 8), built of mud brick, two-storey houses and countless graves are all good indicators of the status of the town in the recent past. It needs urgent work and it is the intention of the project to concentrate on documentation work in the town. The changing climate and modernization are affecting the town landscape (Elzein 2008). Wad Nimeiri is the site of a large fort built of sandstone and mud brick. South of it extend the remains of houses which indicate the existence of a town, which would explain the existence of the large cemetery to the west of it. The cemetery includes white-washed domed tombs and three or four mud brick stepped structures assumed also to be tombs, either square or round in shape. These lie beside other

Sudan & Nubia the natural and human factors in the area that led to the disappearance of most of them. Some of the sites, like el-Khandaq, need urgent work to safeguard what is left from the medieval and post-medieval town. The town had links and contacts with western Sudan and parts of the central and eastern regions through trade and traders. Et-Teiti and Sahaba are two important sites for the study of the process of Christianization as well as Islamization. In the area of et-Teiti, besides the heavy scatter of pottery, there are remains of two churches which mark the area as an important religious or administrative centre. It is evident from the three seasons of work that we are dealing with a variety of historical periods, the study of whose remains involves many different scientific disciplines: Medieval and post-medieval (Christian and Islamic, Ottoman), industrial archaeology, inscriptions and epigraphy, documents, ethnographical observation and above all funerary archaeology.

structures delimited by the vehicle track. The project has been able to survey the fort and a plan has been produced. There is still more work to be done in the southern section of the fort and outlying structures (Elzein 2010). Sahaba is an interesting site which carries the name of the companions of Prophet Mohammed PBU (Peace be upon Him). It is venerated as the place where a battle was fought between the Muslim invaders and the army of the Christian Kingdom of Makuria before reaching Old Dongola, the capital. It is related that many of the Sahaba (companions) were killed and buried in this place. The sites include the main one in which the Sahaba were said to be buried, which also includes Christian brick graves misinterpreted as those of the Sahaba, who were buried in the wrong orientation because they were martyrs and martyrs should be buried in the spot and with the orientation as they fell (Plate 9). These are beside a mosque built of stone and two mud-brick qubbas. Other sites are mainly Islamic cemeteries and one prehistoric site with rock drawings (Elzein, NCAM mss).

Many thanks go to the following bodies who supported the first phase of the project (2007-2009): The University of Khartoum, The Sudan Archaeological Research Society and the people of el-Khandaq also for their continuing support in the form of protection of the site and preparation of a permanent camp for the team. I am grateful to my colleagues in the Department of Archaeology and Isabella Welsby Sjöström (members of the team), the drivers Khalid and Salah. Special thanks go to Isabella Welsby Sjöström and David Hooker for surveying Wad Nimeiri fort.

Plate 9. Sahaba cemetery claimed in the local traditions to be of Muslims.

Sheikh Sheriff. There are eight sites, mainly Islamic qubba cemeteries and a mesid. Some of the cemeteries were abandoned, but most of the sheikhs buried there are known to local people (their names are still fresh in their memories). Sheikh Sherif himself is buried in the qubba, partially collapsed, incorporated within the mesid’s walls; it is built of mud brick with a keel arch entrance. Only one prehistoric site was recorded; which yielded lithic tools within an Islamic cemetery (19º 07.056’ N / 30º 28.627’ E).

It is clear that the area was of considerable importance as part of the Christian Kingdom of Makuria in the vicinity of the capital Old Dongola, which received traders, missionaries to Islamize the ruling class and finally the first Nubian Muslim king in the early 14th century. The percentage of prehistoric and early historic sites is low, which might be attributed to 145

The archaeological and cultural survey of the Dongola Reach, west bank from el-Khandaq to Hannek

The archaeological and cultural survey of the Dongola Reach, west bank from el-Khandaq to Hannek