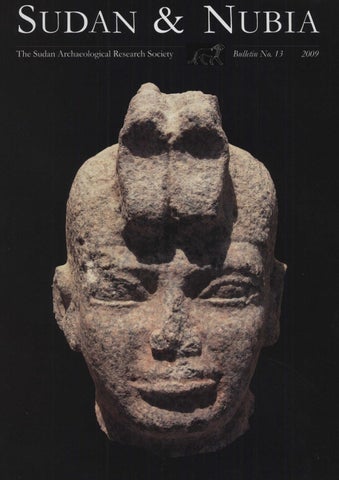 Excavations started in Cemetery One, which contained numerous tumuli, extending over c. 450m, from the southern end of the concession to north east of the Citadel. Work began in the south of the cemetery and about 127 tumuli of the late X-Group period were opened and recorded. In the same area, amongst the tumuli, approximately 30 medieval (Christian) graves were also found, thought to date to the earliest period of the Christianisation at Gebel Adda. In Cemetery One, four examples of the double-domed mud-brick tombs of the Islamic period (Plate 2) were also excavated. Due to shortage of time, excavations did not

The primary purpose of this brief report is to publish photographs of a late Meroitic grave stela, from the now destroyed site of Gebel Adda, in Egyptian Nubia, in conjunction with some brief comments on the conduct of the important fieldwork carried out at the site in the early 1960s, by one of the original team members, Reinhard Huber. Whilst the existence of this stela was known from a description in Nicholas Millet’s published doctoral thesis, in which a transcription was presented (Millet 1968, 314-319; text GA19) and more recently in a posthumous publication, relating to Meroitic texts found at the site (Millet 2005), in the absence of published illustrations, this text has yet to be registered within the Répertoire épigraphique Méroïtique (REM). The publication here of photographs of the stela will facilitate its registration and hopefully be of assistance to future studies. The excavation team of the American Research Center in Egypt, under the direction of Dr Nicholas B. Millet, first arrived at Gebel Adda in January 1963, for what were to be four excavation seasons. Its concession extended from Wadi el-Ur Plate 2. Gebel Adda: Cemetery One looking north east (photo Reinhard Huber). in the north to Gebel el-Shams in the south, a continue into the northern part of Cemetery One and subdistance of c. 800m and from the shore of the River Nile to sequently were moved to Cemetery Three, lying below the the eastern end of Cemetery One, approximately 500m. In east side of the Citadel. There, the foundations of several the northern part of the concession, built on a hill, was the Meroitic pyramids were found (Plate 3) and a large cemetery, imposing Citadel (Plate 1). To the west of the hill, a steep thought to date to the early X-Group period. That cemetery cliff ran down to the bank of the river, providing natural included some hundreds of tombs, cut into the bedrock protection for the Citadel (Colour plates LI and LII). The and alluvium, usually with vaulted mud-brick sub-structures. picturesque landscape between the Citadel and Gebel elThe cemetery also included numerous Islamic graves. This Shams was often breathtaking.

Sudan &amp; Nubia cemetery appears to have only come into use in the very late Meroitic period, and then remained in use throughout the post-Meroitic period. While no detailed description of the site has been published, some 400 graves were identified within that cemetery (Millet 1967a), the vast majority of which seem likely to be of ‘post-Meroitic’ date. Some uncertainty, evident in the initial, published, interpretations of the cemetery, may have reflected the unfamiliar nature of the very late Meroitic/ transitional post-Meroitic pottery and other material culture encountered in the burials there. This led to an assumption (probably mistaken), by the excavators of the widespread re-use of the (very late) Meroitic graves, notably the large pyramid-covered tombs (Millet 1967a, 125-26). Excavations were not completed there in 1963 and were continued in the following season 1963-1964. Towards the end of the 1963 season, problems were encountered in storing the large quantities of skeletal material recovered from the cemeteries, once the purpose-built storeroom became full. In the absence of a team anthropologist some basic anthropometric recording of the human remains was begun by Mr Martin Minns (the assistant director) and Reinhard Huber. Mr Minns had previously worked as field assistant for Prof. W. B. Emery, at both Buhen and Qasr Ibrim, and had some experience of such work. With the permission of their Egyptian Inspector, Girgis Daud and Dr Nicholas Millet, these two remained at Gebel Adda for an additional two weeks, after the departure of the rest of the expedition, to accomplish this task. On the last day of their stay, while burying some waste material near the western end of Cemetery Three, Reinhard Huber encountered an intact Meroitic stela (Plate 4), subsequently registered as inscription GA19. The stone was found lying face down in loose sand c. 400mm below the surface and lacked any stratified context, although Millet subsequently noted that the findspot was near Tomb 293, not far from Pyramid 5 (2005, 9). Minns and Huber were able to securely pack the stela and transport it across the Nile to Ballana and, having asked the Antiquities Department of the Cairo Museum to inform the officials of the find, transported the stela to Cairo and delivered it to the Cairo Museum. Although it was impossible to make a hand-copy of the stela at the time, some photographs were taken and Dr Millet was subsequently able to make a transcription of it. His first reading was published in his PhD dissertation (Millet 1968), with a later version included in his posthumous publication of the Meroitic inscriptions from Adda (Millet 2005), but in neither case were illustrations included.

information relating to the text. Millet’s readings of the stela can also be compared with the images, but in general terms it does not seem that any significant changes may be suggested to his original readings, apart from a few minor corrections. Further lexical research in the future may, however, suggest some further minor corrections, especially with regard to the commonly problematic signs. A simple reading of the two columns of the stela is presented below, drawing on Millet’s earlier readings, with the addition of a few minor amendments. Millet recorded the dimensions of the sandstone stela as 510 x 400mm (x 75mm thick). The stela is most unusual in incorporating two separate commemorative texts, apparently relating to two generations of a family. The palaeography appears consistent with a 3rd century AD date (Rilly’s Tardif A), but probably not into the 4th century, according to Rilly’s chronological schema (Rilly 2007, 340-351). Millet noted that the text of the stela is problematic in a number of ways, being carelessly carved (‘the worst executed’ at Adda) with several apparent ‘errors’. Further complications arise when it had clearly proved problematic to include all the required text of the left-hand inscription in the available space within the inscribed guide-lines created for the right-hand column. Another curious feature of the stela is the presence of what appears to be a carved footprint in its upper left part (Plate 5). It would seem likely that this relates to a later re-use of the stela.

Stela GA19 was one of at least 13 Meroitic stelae (and potentially several others represented by small fragments) found at Gebel Adda. To accompany the photographs taken in 1963 provided by the first author, the chance is taken here to provide a (slightly revised) transcription of the text with a few additional comments, bringing together essential

transcription (1968, 316) suggested a reading of only one (in l.16). It is suggested here that a reading of an n may in fact be more probable, perhaps in both instances, the forms of the signs appearing very similar to those seen in l.9, and l.12 in the right-hand column. l.16. As Millet suggested (2005, 10), the isolated d at the end of the line 16, may well represent a correction/addition to the end of the previous line.

We would like to thank Martin Minns and Horst Jaritz for their assistance with this brief article and for providing photographs.

l.1. The presence of a word divider at the end of the line, omitted by Millet, seems clear on the photographs. l.15. The initial ƒ forming part of the word psiƒekese seems secure, although its placing some distance from the original margin of the block would suggest that this corner of the stela had already been chipped before the text was inscribed.

The left-hand column with the second inscription was significantly longer than the first text, necessitating the compression of the final two lines of text below the last framing line at the end of the text. 1.14-16. In his last transcription of the text (2005, 9-16) Millet suggested the presence of two numerals (5), while his original 102

by R. Huber and D.N. Edwards — Sudan & Nubia, No 13, published by The Sudan Archaeological Research Society, 2009