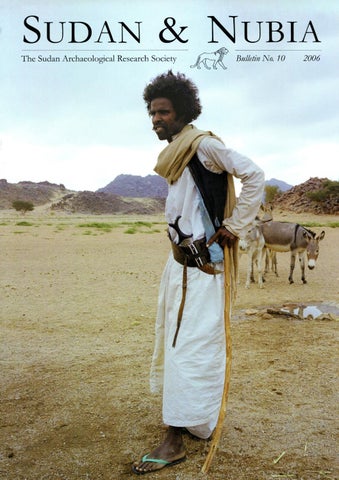 Preliminary report on the excavations conducted on Mis Island (AKSC), 2005-2006 Andrew Ginns The Third Season of the SARS Anglo-German Expedition to the Fourth Cataract of the Nile Pawel Wolf and Ulrike Nowotnick

Apedemak and Dionysos. Further remarks on the “cult of the grape” in Kush Andrea Manzo

The Merowe Dam Archaeological Salvage Project Excavations in the vicinity of ed-Doma (AKSE), 2005-2006 Derek A. Welsby

Antaios the Giant and Antaios the God, or how could the Greeks have got it so wrong? A statuette in the Nubian Museum: a case of understated syncretism Donald M. Bailey

Comments on the two Egyptian jars found at Tomb no. 1 of site 3-Q-94 Robert Schiestl

Drawings on rocks: the most enduring monuments of Middle Nubia David N. Edwards

It is a flat area covered with black soil and measuring about 150 x 260m in size. The site has been heavily disturbed by many factors; the construction of the railway in 1898 damaged the eastern part of the site. Recently, large parts of the southern part of the site have been dug out by the locals, who make their mud bricks out of the site’s deposits leaving large pits and swamps. In addition, the buildings of the present village extend towards the northern and southern parts of the site. These buildings are built over an old redbrick construction. The site was surveyed and this revealed that it is very rich archaeologically. The fragments of red bricks which measured 200+ x 180mm by 80mm thick (Plate 1) are most probably of Meroitic date. However, the structure and its function cannot be determined at the moment. Two east-west transects were made through the site where the archaeologiPlate 1. Part of red-brick wall cal finds on the surface visible on the surface, probably were concentrated toof Meroitic date. wards the south, and consisted of the remains of wooden posts (Plate 2), fragments of stone grinders, fireplaces and pot-sherds. The fineware pottery sherds show the importance of the site (Colour plate XLV, Figure 2), these being classified as fine-walled cups: ‘egg-shell wares’, Adams’ Family M (Adams 1986). This type is common at Meroe, and is defined by Shinnie and Bradley as Group Fb; it is an unslipped white ware, externally decorated with a combination of stamps and brown painted bands (Shinnie and Bradley 1980, 15455). A fragment of a faience vessel with a large flat base and a thick wall was collected.3 The nearest site which has provided pottery sherds in the same fabric is the Meroitic cemetery at Gabati (Edwards 1998, 66-67 fig. 33, no. 9402).

Mohamed Faroug A. Elrahman The area between the Fifth Cataract and ed-Damer has been mostly surveyed by Crowfoot (1911), Jackson (1926) and Crawford (1953a; 1953b) and their work has served to supplement the accounts of the 19th century travellers. Meroitic habitation sites have been located at Fikhikheira (Khider A. Ahmed 1984, 26-31), Jebel Dayiga and Zeidab East, while some others are associated with temples such as at Gadu and Matmir (Hintze 1959, 174-5). Shinnie suggested that these sites represent the distribution of the Meroitic suburban settlements (Shinnie 1979, 124). For further study, these sites have to be investigated to shed more light upon royal and non-royal habitation and administrative sites in the Meroitic period, and to answer the question as to whether these settlements were inhabited by, and the area controlled by, a local chieftain appointed by the king, or a member of the royal family (viceroy?). During the 5th season of the Akad project, a police officer1 informed us that there was a concentration of pottery sherds near the railway at ed-Damer. The site is located in el-Frai village south of the junction of the railway and the ed-Damer-Atbara road (Figure 1).2

Discussion For the first time at ed-Damer, according to the preliminary study of the material collected, a

site can be dated to the Meroitic period, and added to the distribution map. Further investigation here may enrich our knowledge of the administration and of Kushite policy towards other urban centres in the Meroe region away from the capital. It may also facilitate studies of the nature of the non-royal society discussed by Shinnie following his work at Meroe. It is that stratum of society whose presence made possible the existence of palaces and temples and who were crucial to the maintenance of the fabric of the Meroitic state (Shinnie 1999, 13).