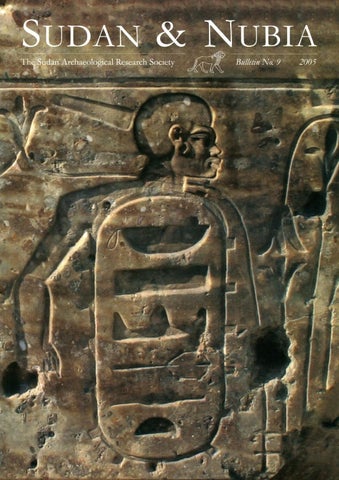 The Site The site of es-Sour (16° 57.045’ N / 33° 43.133’ E) is located about 35km from Shendi, 1.5km from the right bank of the Nile and west of the Khartoum-Atbara railway (Figure 2). It was discovered during a field training season of the Department of Archaeology, University of Khartoum, in February-March 2004. It occupies an area of approximately 176 x 90m (64 x 90m for the main kom) and, while generally flat, two low mounds occupy its eastern part. The nearby village extends over much of its western part while the central part of the site has been much disturbed by tracks running across it. Following the discovery of the site, surface collections and limited test excavations were carried out. A 2m grid system was laid out on the east side of the site, covering first an area of 12 x 12m, which was then enlarged northward as far as 26m, with each square numbered (A1, A2, B1, etc.). Within the grid, nine squares were excavated. In the absence of obvious stratigraphy, the deposits were excavated in arbitrary layers 10cm deep. Five squares were

Es-Sour: A Late Neolithic Site near Meroe Azhari Mustafa Sadig Introduction The site of Meroe has seen much archaeological interest since the beginning of the 20th century, mainly focused on its Kushite (Napatan and Meroitic) and post-Meroitic remains. However, relatively little systematic survey has been carried out in the surrounding region. For this and other reasons, the Department of Archaeology, University of Khartoum, began a new survey project, concerned with sites of all periods in the region to the north of Meroe, extending as far as Mutmir. Survey and test excavations were begun within a concession held by the Department directed by Prof. Ali Osman during 2004 and by the author during January-February 2005. One site discovered during this survey was located east of the village of es-Sour, north of the Royal City of Meroe (Figure 1). This large Neolithic site does not appear to have been previously recorded although it is located no more than c.750m from the last archaeological unit labelled by Garstang in the city of Meroe area (i.e. M622). This is the first substantial Neolithic site discovered in the neighbourhood of Meroe, and bears many similarities to the large Neolithic site at el-Kadada, which lies about 30km upriver from Meroe.

Table 1. Distribution of sherds and other finds material through excavated levels. Layer

in consistency. From Level 6 (50-60cm), deposits included more clay soil and sand and finds densities declined, with little bone. In Level 7 (60-70cm) in squares B5, D5, and F5, the soil changed to a mixture of sands and clay soil and no further archaeological material was found below a depth of 60cm depth. One square (A7) yielded 15 lithic artefacts and 45 potsherds in the first 5cm of this level, but no fragments of bones or shells.

quartz tools being produced on small blades. Cores (3.1%), generally of simple forms, were used primarily for the production of flakes.

Stone Artefacts The lithic inventory includes debitage, cores, a few retouched tools, grinders (Plate 1) and hammerstones. The finished tools are few and badly made. They exhibit somewhat limited technological and typological variability. The occurrence and density of artefacts were variable but continuous from the surface down to the undisturbed natural, although most were concentrated in the top 50cm of deposits. Preliminary analysis of the material confirms that it was largely debitage (84%) composed of shattered fragments, broken flakes, small chips and chunks. Retouched tools formed 12.9% of the assemblage. With the exception of a single piece of fossil wood and sandstone used for pounders/grinders, all the excavated material was quartz. Rhyolite and granite tools were not found in the excavated squares although some tools were collected from the surface. The majority of lithic artefacts are finished scrapers. Backed tools, a few crescents, and grinders make up the bulk of the remainder. The flakes themselves vary considerably in size and shape from small flakes to irregular large flakes. Although only a small sample of chipped stone artefacts have been examined, it is possible to describe the siteâ&amp;#x20AC;&amp;#x2122;s industry as a flake-based industry, with some larger but badly-made

No polished stone tools and gouges of the type found at esh-Shaheinab were found, except for a small fragment of a granite palette found on the surface. However, one interesting find was a small rhyolite artefact with a characteristic shape and two small hollows on both faces (Plate 2). Its function remains uncertain, although the shape suggests that it may have been a fine polishing/grinding tool or palette. The example from es-Sour is very similar to specimens found at el-Kadada (Geus 1984, 69, fig. 5). Similar artefacts have also been found in the Eastern Butana and near Kassala (Marks et al. 1986, 47).

accounting for 12% of the total assemblage. The rims were simple in shape but vessel shapes at the site include a range of mainly open-mouthed vessels. The favourite vessel forms seem to be a medium-size open bowl and hemispherical vessels. Sherds range in thickness between 10 to 4mm (Figure 3).

Classification The feature that can be used most readily in the current state of research is the decoration (Figure 4). The ceramic collection from es-Sour included all the techniques and motif types favoured in the Khartoum Neolithic of the Central Nile Valley. A variety of techniques were employed. These include impressing, incision, rocker stamping and combing, resulting in a number of motifs. The decorated sherds are classified into motifs which are detailed in Table 2. As we see in Table 2 the favourite decorative technique at the Neolithic site of es-Sour is the rocker in all its varieties. These account for more than 60% of the total. The impression technique accounts for more than 19.5% of the total. The incised lines account for 8.4% while the rest account for 12.1%. The Neolithic sites of esh-Shaheinab, Nofalab and Geili offer the same panorama, where the rocker stamping predominated; 45% at Geili, 58-72% at Nofalab, and 50% at esh-Shaheinab. Similar decorative patterns and/or techniques are found at other Neolithic sites in the Central Sudan, especially at Zakiab and Um Direiwa. At Kadero, however, rocker stamping accounts for 36% of the total, while incised motifs account for more than 18% (against 8.4% at es-Sour). Rippled pottery is less abundant than at el-Kadada.

rated with rocker techniques (Figure 5). What may be offerings associated with the burials were also identified in the form of lower and upper grindstones found just beside one pot (Plate 3), while fragments of ostrich eggs, shells, and one bead may indicate the types of offerings placed inside the pot.

Pot-Burials One important discovery in the site was the presence of pot-burials. In the Middle Nile, the practice of pot-burials was first discovered at el-Kadada and seems to have been restricted to young children â&amp;#x20AC;&amp;#x153;only to children up to six years oldâ&amp;#x20AC;? (Geus 1984, 28). In the case of es-Sour two such potburials were discovered during the test excavations. Unfortunately, the two skeletons were much eroded, and were mostly very fragmentary. The two pots containing the burials are large (with a mouth diameter of 35-40cm) and deco-

Other finds of potential importance were two fragments of human figurines (Plate 4). The first one is a human head, with no prominent features, but looking very similar to examples found at el-Kadada (Geus 1984, 22). The hair of the figurine is decorated with a hard rippled decoration. The other one is an incomplete human figurine, comprising

Table 3. Percentages of ceramic motifs through the levels of es-Sour excavation squares.

Plate 4. Es-Sour: two human figurines made of ceramic found on the site.

the torso of a female(?) body. Unfortunately, the upper and lower parts of the figurine are lost. The purpose of these pottery figurines still remains unclear although it is often assumed that they have a religious significance. Other artefacts were rare at es-Sour and we recorded only two beads made of egg-shell, a carnelian bead, one lipplug and one ivory artefact (Plate 5). The ivory tool could

have been used as an awl/perforator but it may also have been a personal adornment. Other typical Neolithic bone artefacts such as harpoons and stone axes were not found. The lack of bone tools is a feature of most other Neolithic sites in Central Sudan, although recent finds in more arid areas further north suggest that this may be due to poorer preservation.

Conclusion As yet no adult burials have been found and the area of the site so far investigated would seem to represent a settlement area. As at el-Kadada, child burials, which the potgraves seem likely to represent, may have been placed within the settlement area, apart from the main cemetery. Further area excavations will be required to determine whether any structural features survive on the site, although it seems likely that it has been severely deflated. Further testing and survey work are also required to see if there is an associated cemetery in the vicinity. As yet the exact date of the site remains uncertain in the absence of radiocarbon dates, although there are enough similarities with material from sites such as el-Kadada to suggest a date in the later Neolithic period (late 5th - 4th millennia BC). The most distinctive features of the es-Sour material, which suggest a later Neolithic date, are the high index of flakes, pottery decorative styles, special types of lithic artefacts, pot-burials, the presence of carnelian beads and human figurines. Gouges, a typical tool at earlier sites such as esh-Shaheinab, are absent. However, the character of the pottery assemblage needs to be further explored, not least because so much of our published data relates to assemblages derived from cemeteries (e.g. el-Kadada or el-Ghaba), which cannot be seen as ‘typical’, and may differ significantly from those from settlement sites. Such differences may also explain the absence of items such as polished stone axes, mace-heads and palettes (all likely to be prestige objects) from this settlement site.