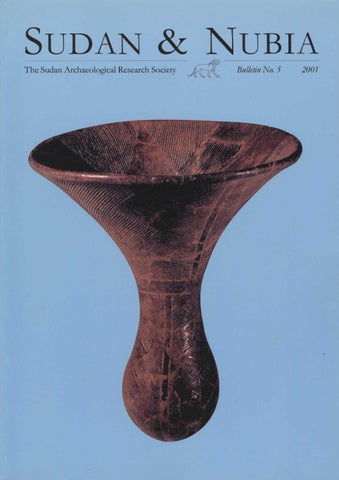 Palaeotrauma: a profile of personal injury during the Kerma Period Margaret Judd

Nubians at Hierakonpolis Excavations in the Nubian Cemeteries Renée Friedman

Excavations within the Pharaonic and Kushite site at Kawa and in its hinterland, 2000-2001 Derek A. Welsby

Notes on the “non-sacred” parts of the Great Enclosure Dieter Eigner The Christianisation of Nubia: some archaeological pointers David N. Edwards

Introduction Vivian Davies The appearance of this, the fifth, issue of the Bulletin coincides with the tenth anniversary of our Society’s founding. It has been an extraordinary first decade, remarkably productive in terms both of fieldwork and publication - one in which we have worked closely with our colleagues in the National Corporation for Antiquities and Museums of the Sudan to fill gaps in the archaeological record and meet, wherever possible, the threats posed to archaeological sites by modern development. We have organized and supported eight major field-projects (in Soba East, the Northern Dongola Reach, Kawa, the Shendi-Atbara Reach, Gabati, the Bayuda Desert, the Fourth Cataract, and Kurgus) and published five memoirs (two others are in press at the time of writing), as well as Sudan &amp; Nubia, an annual bulletin of reports ‘fresh from the field’. Furthermore, we have held each year an international colloquium on current fieldwork and research, and we now additionally host the annual ‘Kirwan Memorial Lecture’, in memory of our distinguished first President. The considerable funds needed to carry out this extensive programme have been forthcoming most substantially from the Bioanthropology Foundation and the British Museum, upon whose generosity we continue to rely, as we do also on that of the Society’s individual Patrons. We intend to mark the Society’s achievements with a special publication to be issued in the coming year. As to the future, the reports in this volume, on sites ranging in date from the Neolithic to the Mediaeval Period, amply demonstrate the huge potential for important new discoveries and scholarly progress in our area of interest, both in Sudan and Egypt, promising a second decade as exciting and rewarding as the first.

The Textiles from the Pan Grave Cemetery Jana Jones

Plate XXXV. Kurgus; inscriptions of the officials Wia and Horiu.

Plate XXXVII. Kurgus; inscription of Follower of the King, Ahmose.

Plate. XXXIX. Kurgus; detail of decoration on southwest face including figure of Nubian captive and cartouche of a princess.

by V. Davies — Sudan & Nubia, No 5, published by The Sudan Archaeological Research Society, 2001