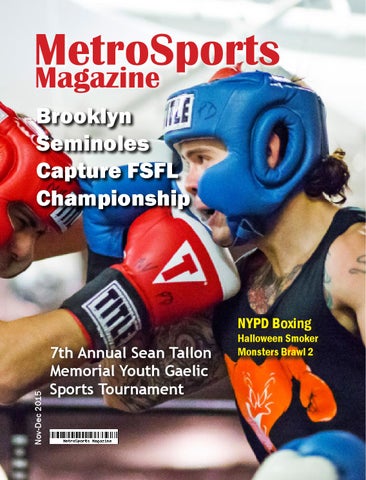 MetroSports Athlete of the Month Jerol Wilson, quarterback of the Brooklyn Seminoles semi-pro football team has been selected as MetroSports Magazine’s Athlete of the Month for November 2015. Jerol let the Seminoles to their third consecutive Five Star Football League Championship, completing 110 passes on the season and posting an impressive 131.4 quarterback rating with his 62.1 completion percentage. Earlier this year, Wilson was named Semi Pro Elite Player of the Year by the website Semi Pro Elite. Picture yourself on the cover of MetroSports Magazine. We’ll create a special issue of MetroSports Magazine featuring you on the cover and highlighted in the feature athlete profile. Send us a high resolution digital photo file and a brief biography and we’ll prepare and send you a printed full-color copy of an actual MetroSports Magazine with your cover. Send your request to warren@nyspg.com 2 | November-December 2015

ionship, defeating the New York Rebels on a cold October 18th afternoon at the Mitchell Field Athletic Complex in Uniondale, NY. Both teams entered the game with undefeated records. The Five Star Football League (FSFL), conceived in 2010 currently fields 15 teams throughout the New York Metro region including Metro New York City, Long Island and Westchester County. In order to compete as part of the FSFL, a team must demonstrate that it has both financial and operational stability and the ability to field a competitive team, appropriately equipped. FSFL teams must have rosters consisting of at least 22 and up to 65 eligible and active players. Athletes are not paid to play in the FSFL. The FSFLâ&amp;#x20AC;&amp;#x2122;s first official game took place on July 24, 2010 between the Empire State Demon Knights and the Long Island Hurricanes. The New York City Falcons went on to win the inaugural 2010 FSFL Championship. The Falcons and Demon Knights are still active in the league. One of the FSFLâ&amp;#x20AC;&amp;#x2122;s most dominant teams is the Brooklyn Seminoles, undefeated in the recently completed 2015 season following up on their 2013 and 2014 FSFL League Championships. The Seminoles also won the United Sates Football Association 2014 Harvest Bowl Championship by defeating the Pioneer Valley Knights of Holyoke, Massachusetts, the 2014 Champions of the New England Football League. 4 | November-December 2015

The Seminoles have not only crowned their 2015 season with the FSFL Championship, but they have been ranked as the number 1 team in the nation by the National Football Events Coaches Poll conducted on October 1 ahead of other teams including our regional Connecticut Panthers of the New England Football League (at #8), New York Rebels of the FSFL (at #16), the Western Connecticut Militia of the New England Football League (at #19), New York Predators of the Major Football League (at #30). Prior to 2010 the NY Metro region was served by the Big East Football Federation (BEFF), the league in which the Brooklyn Seminoles played along with other local teams including the Westchester Packers, New York Venom, New Jersey Cynder and New Jersey Longhorns.

The Seminoles closed the 2015 campaign having scored a total of 400 points, almost twice the offensive production of the Golden Eagles and accumulating the league high of over 4,000 total offensive yards. The Seminoles were equally stingy on defense, giving up the lowest point total in the FSFL. The team also topped the league in total team rushing (1,875 yards) and total team passing (2,135 yards). Brooklyn’s QB, Jerol Wilson, finished the 2015 season as the FSFL’s most productive quarterback with 105 completions, 26 touchdown passes, over 2,100 yards gained and a league high QB rating of 131.8 Currently active teams in our region outside of the FSFL are the Western Connecticut Militia of the New England Alliance Football League which supports teams in Rhode Island, Massachusetts and Connecticut, the Westchester Steelers and Westchester Warriors of the Major League Football (not the NFL), and two allwomen full-contact teams, the Connecticut Wreckers and the New York Sharks of the Independent Women’s Football League.

All Photos by Clark Thompson. Clarkshots.com

Custom Posters from MetroSports Magazine We’ll prepare custom posters, for your personal use or for your business, in sizes from 8” x 10” through 24” x 30” from any photos in MetroSports Magazine and even from those taken at the covered events but not published in the magazine. Send inquiries to warren@nyspg.com

Let us prepare a custom cover of any MetroSports Magazine with your favorite photo. Full color glossy prints in sizes 8” x 10” or 16” x 20” suitable for framing. Send inquiries to warren@nyspg.com

NYPD Boxing n celebration of Halloween and in I support of charities throughout New York City, the NYPD Boxing Team New York’s Fighting Finest - put on a wonderful show at the 2015 Halloween Smoker Monster’s Brawl Held at Brooklyn’s Sanders Studios, this year’s Smoker featured 11 bouts between officers from precincts across the City.

The maintenance of good health requires the balance of proper exercise and nutrition. The American College of Sports Medicine recommends that all adults participate in at least 20 to 60 minutes of aerobic activities every day along with two to three days per week of resistance activities. An excellent way of achieving this goal is through regular participation in sports activities. Step 1 Aerobic activities are those which demand an increase in the amount of oxygen delivered to your muscles and increase both the heart rate and respiratory rate. The health benefits of aerobic activities include decreased levels of body fat, improved respiratory capacity, a stronger heart, healthier arteries, and an improved blood lipid profile.

for the arms, shoulders and upper back. Step 5 Many sports activities, some of which are referenced above, provide both aerobic and resistance components. For maintaining optimal health, be sure to select a sport or sports that includes both types of activities.

Step 2 Participating in any sport that elevates both your heart rate and respiratory rate and maintains that elevated level for at least 30 minutes will provide you with all of the positive benefits of an aerobic exercise program. Such sports include running, cycling, swimming, basketball, tennis, and kickboxing. Step 3 Resistance training comprises activities requiring your muscles, tendons and skeletal structures to push or pull against objects that resist being moved. In resistance training, exercise objects include free weights, such as barbells and dumbbells; machine-assisted resistance, such as universal and nautilus machines; or the force of gravity in calisthenics, for example, push-ups and sit-ups. The benefits of resistance training include increased muscle mass and strength, stronger tendons and ligaments, and increased bone mineral density. Step 4 Participating in sports activities that provide resistance to the movement of your muscular and skeletal structures will provide the benefits of resistance training.

Sean Tallon Memorial MetroSports Magazine returned to NYCâ&amp;#x20AC;&amp;#x2122;s historic Gaelic Park on November 1st as the Ancient Order of Hibernians (AOH) hosted its seventh annual Sean Tallon Memorial Gaelic Sports Tournament in cooperation with the Gaelic Athletic Association (GAA) Minor Board. Over 250 young athletes and their families gathered to commemorate the life of fallen FDNY firefighter, Sean Patrick Tallon, a Yonkers native and Marine Corps reservist who lost his life responding to the September 11th terrorist attack on the World Trade Center. Conducted under the jurisdiction of the GAA Minor Board and cosponsored by the AOH Bronx County Board, the AOH New York County Board, the AOH Queens County Board, the AOH Westchester County Board, AOH Division #18 of Peekskill, and the AOH Myles Scully Division #1 of Yonkers, NY, over 20 youth teams from Westchester, Rockland, Connecticut, New Jersey and the 5 boroughs of NYC came out to historic Gaelic Park in the Bronx for a day of lively competition and celebration of Irish culture according to Kevin Ellis, President of the Myles Scully Division 1 of the AOH.

“The Ancient Order of Hibernians is dedicated Sean Tallon’s mother Eileen (left) and sister Rosaleen (right) address the players and families to promoting Irish culture, and sports is a very

important part of that culture” says Kevin Ellis. He goes on to add that, “keeping these traditions alive is very important to the Irish in New York, and the GAA Minor Board does an amazing job.” The GAA is the governing body for Irish sports throughout the world and, in the US, the North American GAA promotes the sports in all 50 states with the exception of the NY Metro Area. Here in the MetroSports Magazine coverage area, Gaelic sports are governed by New York GAA , founded in 1914. While the historic Gaelic Park in the Bronx, NY, is the home field for NY GAA hurling and football, Gaelic games have bee held at Yankee Stadium and the old Polo grounds. MetroSports Magazine | 31

All Photos by Warren Rosenberg, nyspg.com

Sports Photo Tip of the Month Two faces and a ball, kid.

What makes for an incredible sports photograph? Certainly technical execution is part of equation. Selecting the proper equipment - camera body, lenses and lighting equipment can’t be ignored. Proper attention must be paid to selecting the proper shutter speed, lens aperture, and ISO. But realize that what is perhaps most important is capturing the competition and emotion of the event, and what follows is some very simple advice on how to get the best pictures.

It is rarely helpful to shoot players from the back and photo editors for sports publi- Of course if the sport doesn’t use a ball, cations often reject images that don’t con- then two faces and a boxing glove, tennis racket, or other relevant item would tain the players’ faces. work just fine.

Coming in the next issue of MetroSports Magazine Basketball, Gymnastics, Ice Hockey