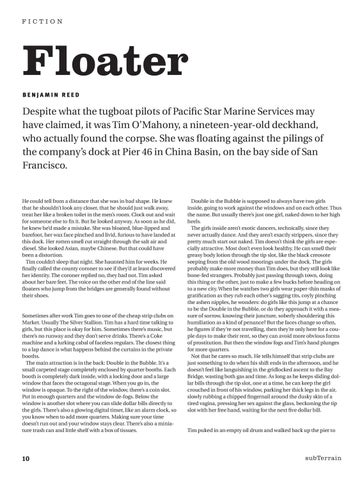 Despite what the tugboat pilots of Pacific Star Marine Services may have claimed, it was Tim O’Mahony, a nineteen-year-old deckhand, who actually found the corpse. She was floating against the pilings of the company’s dock at Pier 46 in China Basin, on the bay side of San Francisco.

He could tell from a distance that she was in bad shape. He knew that he shouldn’t look any closer, that he should just walk away, treat her like a broken toilet in the men’s room. Clock out and wait for someone else to fix it. But he looked anyway. As soon as he did, he knew he’d made a mistake. She was bloated, blue-lipped and barefoot, her wax face pinched and livid, furious to have landed at this dock. Her rotten smell cut straight through the salt air and diesel. She looked Asian, maybe Chinese. But that could have been a distortion. Tim couldn’t sleep that night. She haunted him for weeks. He finally called the county coroner to see if they’d at least discovered her identity. The coroner replied no, they had not. Tim asked about her bare feet. The voice on the other end of the line said floaters who jump from the bridges are generally found without their shoes.

Sometimes after work Tim goes to one of the cheap strip clubs on Market. Usually The Silver Stallion. Tim has a hard time talking to girls, but this place is okay for him. Sometimes there’s music, but there’s no runway and they don’t serve drinks. There’s a Coke machine and a lurking cabal of faceless regulars. The closest thing to a lap dance is what happens behind the curtains in the private booths. The main attraction is in the back: Double in the Bubble. It’s a small carpeted stage completely enclosed by quarter booths. Each booth is completely dark inside, with a locking door and a large window that faces the octagonal stage. When you go in, the window is opaque. To the right of the window, there’s a coin slot. Put in enough quarters and the window de-fogs. Below the window is another slot where you can slide dollar bills directly to the girls. There’s also a glowing digital timer, like an alarm clock, so you know when to add more quarters. Making sure your time doesn’t run out and your window stays clear. There’s also a miniature trash can and little shelf with a box of tissues.

Double in the Bubble is supposed to always have two girls inside, going to work against the windows and on each other. Thus the name. But usually there’s just one girl, naked down to her high heels. The girls inside aren’t exotic dancers, technically, since they never actually dance. And they aren’t exactly strippers, since they pretty much start out naked. Tim doesn’t think the girls are especially attractive. Most don’t even look healthy. He can smell their greasy body lotion through the tip slot, like the black creosote seeping from the old wood moorings under the dock. The girls probably make more money than Tim does, but they still look like bone-fed strangers. Probably just passing through town, doing this thing or the other, just to make a few bucks before heading on to a new city. When he watches two girls wear paper-thin masks of gratification as they rub each other’s sagging tits, coyly pinching the ashen nipples, he wonders: do girls like this jump at a chance to be the Double in the Bubble, or do they approach it with a measure of sorrow, knowing their juncture, soberly shouldering this humiliation as a kind of penance? But the faces change so often, he figures if they’re not travelling, then they’re only here for a couple days to make their rent, so they can avoid more obvious forms of prostitution. But then the window fogs and Tim’s hand plunges for more quarters. Not that he cares so much. He tells himself that strip clubs are just something to do when his shift ends in the afternoon, and he doesn’t feel like languishing in the gridlocked ascent to the Bay Bridge, wasting both gas and time. As long as he keeps sliding dollar bills through the tip slot, one at a time, he can keep the girl crouched in front of his window, parking her thick legs in the air, slowly rubbing a chipped fingernail around the dusky skin of a tired vagina, pressing her sex against the glass, beckoning the tip slot with her free hand, waiting for the next five dollar bill.

The Best in Outlaw Literature