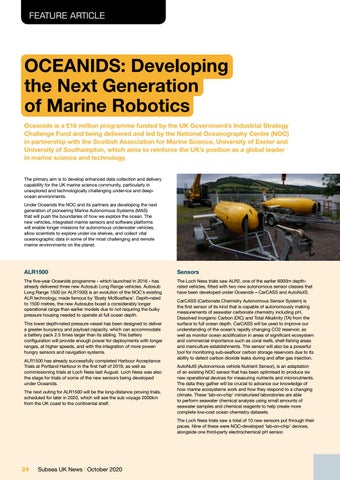 OCEANIDS: Developing the Next Generation of Marine Robotics Oceanids is a £16 million programme funded by the UK Government’s Industrial Strategy Challenge Fund and being delivered and led by the National Oceanography Centre (NOC) in partnership with the Scottish Association for Marine Science, University of Exeter and University of Southampton, which aims to reinforce the UK’s position as a global leader in marine science and technology. The primary aim is to develop enhanced data collection and delivery capability for the UK marine science community, particularly in unexplored and technologically challenging under-ice and deepocean environments. Under Oceanids the NOC and its partners are developing the next generation of pioneering Marine Autonomous Systems (MAS) that will push the boundaries of how we explore the ocean. The new vehicles, integrated marine sensors and software platforms will enable longer missions for autonomous underwater vehicles, allow scientists to explore under ice shelves, and collect vital oceanographic data in some of the most challenging and remote marine environments on the planet.

The five-year Oceanids programme - which launched in 2016 - has already delivered three new Autosub Long Range vehicles. Autosub Long Range 1500 (or ALR1500) is an evolution of the NOC’s existing ALR technology, made famous by ‘Boaty McBoatface’. Depth-rated to 1500 metres, the new Autosubs boast a considerably longer operational range than earlier models due to not requiring the bulky pressure housing needed to operate at full ocean depth.

The Loch Ness trials saw ALR2, one of the earlier 6000m depthrated vehicles, fitted with two new autonomous sensor classes that have been developed under Oceanids – CarCASS and AutoNutS.

Another key element of the Oceanids programme is Command and Control (C2) - a single, unified, web-based platform developed by the NOC’s software engineers which simplifies and centralises the operation of fleets of diverse MAS.

Autosub 2000 Under Ice (A2KUI), has been designed to operate at depths of up to 2000 metres and under ice shelves, as the name suggests. The vehicle will be an evolution of the NOC’s current highpowered workhorse, Autosub 6000.

The C2 platform has been designed to be user-friendly and intuitive, yet powerful enough to allow operators to create complex mission plans. The C2 interface will be made available to the wider UK community for piloting and monitoring of autonomous assets. An automated piloting infrastructure is being created to reduce the piloting load required for missions, which will allow rapid development of automated piloting routines and integration of third-party piloting algorithms for applications using a variety of vehicle types. The Oceanids C2 workflow for near-real-time data from gliders and recovery data from Autosub Long Range became operational in 2019, including delivery of open data via the web.

In addition to its under ice capabilities, A2KUI will be highly configurable and equipped with a new obstacle avoidance system, state-of-the art sonars, and high definition imaging capabilities to enable scientists to create detailed maps and establish habitat characteristics of the seafloor.

This lower depth-rated pressure vessel has been designed to deliver a greater buoyancy and payload capacity, which can accommodate a battery pack 2.5 times larger than its sibling. This battery configuration will provide enough power for deployments with longer ranges, at higher speeds, and with the integration of more powerhungry sensors and navigation systems. ALR1500 has already successfully completed Harbour Acceptance Trials at Portland Harbour in the first half of 2019, as well as commissioning trials at Loch Ness last August. Loch Ness was also the stage for trials of some of the new sensors being developed under Oceanids. The next outing for ALR1500 will be the long-distance proving trials, scheduled for later in 2020, which will see the sub voyage 2000km from the UK coast to the continental shelf.

CarCASS (Carbonate Chemistry Autonomous Sensor System) is the first sensor of its kind that is capable of autonomously making measurements of seawater carbonate chemistry including pH, Dissolved Inorganic Carbon (DIC) and Total Alkalinity (TA) from the surface to full ocean depth. CarCASS will be used to improve our understanding of the ocean’s rapidly changing CO2 reservoir, as well as monitor ocean acidification in areas of significant ecosystem and commercial importance such as coral reefs, shell fishing areas and mariculture establishments. The sensor will also be a powerful tool for monitoring sub-seafloor carbon storage reservoirs due to its ability to detect carbon dioxide leaks during and after gas injection. AutoNutS (Autonomous vehicle Nutrient Sensor), is an adaptation of an existing NOC sensor that has been optimised to produce six new operational devices for measuring nutrients and micronutrients. The data they gather will be crucial to advance our knowledge of how marine ecosystems work and how they respond to a changing climate. These ‘lab-on-chip’ miniaturised laboratories are able to perform seawater chemical analysis using small amounts of seawater samples and chemical reagents to help create more complete low-cost ocean chemistry datasets. The Loch Ness trials saw a total of 10 new sensors put through their paces. Nine of these were NOC-developed ‘lab-on-chip’ devices, alongside one third-party electrochemical pH sensor.

In addition to these benefits, C2 will also help to deliver improved deployment visibility and outreach. Current deployments for the long-range MAS fleet are not as visible to the science community and the wider public as they could be. Improving this visibility will assist with outreach and show UK science in action.

A2KUI will also feature a new onboard control system which will improve system reliability, make it simpler to integrate new sensors, and provide a modern and future-proof system for ongoing development, while the power system will be based upon a NOCdesigned pressure tolerant rechargeable lithium ion battery array, which has been developed to provide constant power for extended duration operations. Marine robotics is transforming how we observe the ocean and opening up new and cost-effective, low carbon research possibilities. The last two decades have seen an increasing interest in ocean exploration, and marine autonomy has emerged as a key technology for enabling science and industry to take advantage of the opportunities that exist and continue to emerge. Through the innovation of new platforms and systems, coupled with the exploitation and adaptation of existing technologies, the Oceanids programme is on course to make a vital contribution to the future of ocean science, and maintain the UK’s position as a leader in ocean exploration. 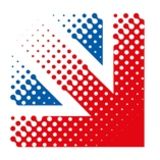