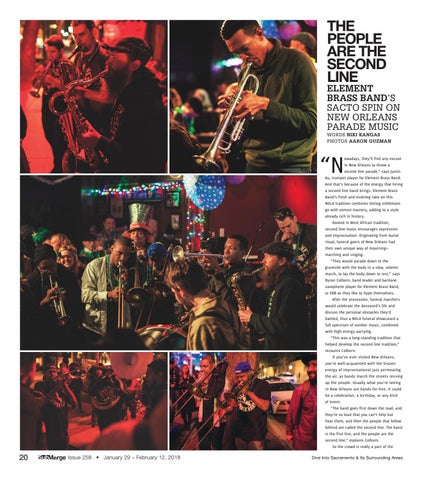 THE PEOPLE ARE THE SECOND LINE

owadays, they’ll find any excuse in New Orleans to throw a second line parade,” says Justin Au, trumpet player for Element Brass Band. And that’s because of the energy that hiring a second line band brings. Element Brass Band’s fresh and evolving take on this NOLA tradition combines letting inhibitions go with utmost mastery, adding to a style already rich in history. Rooted in West African tradition, second line music encourages expression and improvisation. Originating from burial ritual, funeral goers of New Orleans had their own unique way of mourning— marching and singing. “They would parade down to the gravesite with the body in a slow, solemn march, to lay the body down to rest,” says Byron Colborn, band leader and baritone saxophone player for Element Brass Band, or EBB as they like to hype themselves. After the procession, funeral marchers would celebrate the deceased’s life and discuss the personal obstacles they’d battled, thus a NOLA funeral showcased a full spectrum of somber music, combined with high-energy partying. “This was a long-standing tradition that helped develop the second line tradition,” recounts Colborn. If you’ve ever visited New Orleans, you’re well-acquainted with the brazen energy of improvisational jazz permeating the air, as bands march the streets revving up the people. Usually what you’re seeing in New Orleans are bands-for-hire. It could be a celebration, a birthday, or any kind of event. “The band goes first down the road, and they’re so loud that you can’t help but hear them, and then the people that follow behind are called the second line. The band is the first line, and the people are the second line,” explains Colborn. So the crowd is really a part of the

Dive Into Sacramento & Its Surrounding Areas 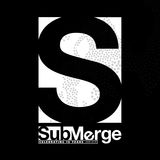