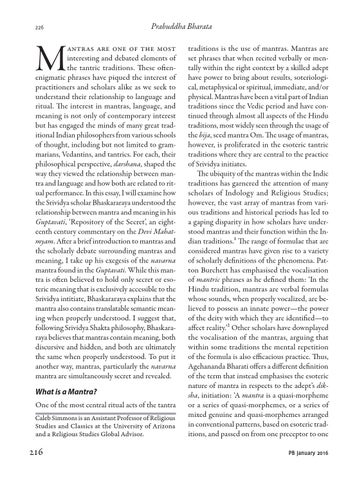 antras are one of the most interesting and debated elements of the tantric traditions. These oftenenigmatic phrases have piqued the interest of practitioners and scholars alike as we seek to understand their relationship to language and ritual. The interest in mantras, language, and meaning is not only of contemporary interest but has engaged the minds of many great traditional Indian philosophers from various schools of thought, including but not limited to grammarians, Vedantins, and tantrics. For each, their philosophical perspective, darshana, shaped the way they viewed the relationship between mantra and language and how both are related to ritual performance. In this essay, I will examine how the Srividya scholar Bhaskararaya understood the relationship between mantra and meaning in his Guptavati, ‘Repository of the Secret’, an eighteenth century commentary on the Devi Mahatmyam. After a brief introduction to mantras and the scholarly debate surrounding mantras and meaning, I take up his exegesis of the navarna mantra found in the Guptavati. While this mantra is often believed to hold only secret or esoteric meaning that is exclusively accessible to the Srividya intitiate, Bhaskararaya explains that the mantra also contains translatable semantic meaning when properly understood. I suggest that, following Srividya Shakta philosophy, Bhaskararaya believes that mantras contain meaning, both discursive and hidden, and both are ultimately the same when properly understood. To put it another way, mantras, particularly the navarna mantra are simultaneously secret and revealed. What is a Mantra? One of the most central ritual acts of the tantra Caleb Simmons is an Assistant Professor of Religious Studies and Classics at the University of Arizona and a Religious Studies Global Advisor.

traditions is the use of mantras. Mantras are set phrases that when recited verbally or mentally within the right context by a skilled adept have power to bring about results, soteriological, metaphysical or spiritual, immediate, and/or physical. Mantras have been a vital part of Indian traditions since the Vedic period and have continued through almost all aspects of the Hindu traditions, most widely seen through the usage of the bija, seed mantra Om. The usage of mantras, however, is proliferated in the esoteric tantric traditions where they are central to the practice of Srividya initiates. The ubiquity of the mantras within the Indic traditions has garnered the attention of many scholars of Indology and Religious Studies; however, the vast array of mantras from various traditions and historical periods has led to a gaping disparity in how scholars have understood mantras and their function within the Indian traditions.1 The range of formulae that are considered mantras have given rise to a variety of scholarly definitions of the phenomena. Patton Burchett has emphasised the vocalisation of mantric phrases as he defined them: ‘In the Hindu tradition, mantras are verbal formulas whose sounds, when properly vocalized, are believed to possess an innate power—the power of the deity with which they are identified—to affect reality.’2 Other scholars have downplayed the vocalisation of the mantras, arguing that within some traditions the mental repetition of the formula is also efficacious practice. Thus, Agehananda Bharati offers a different definition of the term that instead emphasises the esoteric nature of mantra in respects to the adept’s diksha, initiation: ‘A mantra is a quasi-morpheme or a series of quasi-morphemes, or a series of mixed genuine and quasi-morphemes arranged in conventional patterns, based on esoteric traditions, and passed on from one preceptor to one PB January 2016

A monthly journal started by Swami Vivekananda in 1896