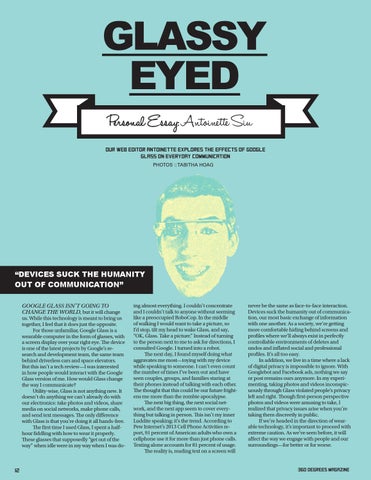 “DEVICES SUCK THE HUMANITY OUT OF COMMUNICATION” GOOGLE GLASS ISN’T GOING TO CHANGE THE WORLD, but it will change

us. While this technology is meant to bring us together, I feel that it does just the opposite. For those unfamiliar, Google Glass is a wearable computer in the form of glasses, with a screen display over your right eye. The device is one of the latest projects by Google’s research and development team, the same team behind driverless cars and space elevators. But this isn’t a tech review—I was interested in how people would interact with the Google Glass version of me. How would Glass change the way I communicate? Utility-wise, Glass is not anything new. It doesn’t do anything we can’t already do with our electronics: take photos and videos, share media on social networks, make phone calls, and send text messages. The only difference with Glass is that you’re doing it all hands-free. The first time I used Glass, I spent a halfhour fiddling with how to wear it properly. These glasses that supposedly “get out of the way” when idle were in my way when I was do-

ing almost everything. I couldn’t concentrate and I couldn’t talk to anyone without seeming like a preoccupied RoboCop. In the middle of walking I would want to take a picture, so I’d stop, tilt my head to wake Glass, and say, “OK, Glass. Take a picture.” Instead of turning to the person next to me to ask for directions, I consulted Google. I turned into a robot. The next day, I found myself doing what aggravates me most—toying with my device while speaking to someone. I can’t even count the number of times I’ve been out and have seen couples, groups, and families staring at their phones instead of talking with each other. The thought that this could be our future frightens me more than the zombie apocalypse. The next big thing, the next social network, and the next app seem to cover everything but talking in person. This isn’t my inner Luddite speaking; it’s the trend. According to Pew Internet’s 2013 Cell Phone Activities report, 91 percent of American adults who own a cellphone use it for more than just phone calls. Texting alone accounts for 81 percent of usage. The reality is, reading text on a screen will

never be the same as face-to-face interaction. Devices suck the humanity out of communication, our most basic exchange of information with one another. As a society, we’re getting more comfortable hiding behind screens and profiles where we’ll always exist in perfectly controllable environments of deletes and undos and inflated social and professional profiles. It’s all too easy. In addition, we live in a time where a lack of digital privacy is impossible to ignore. With Googlebot and Facebook ads, nothing we say or post remains ours anymore. In my experimenting, taking photos and videos inconspicuously through Glass violated people’s privacy left and right. Though first-person perspective photos and videos were amusing to take, I realized that privacy issues arise when you’re taking them discreetly in public. If we’re headed in the direction of wearable technology, it’s important to proceed with extreme caution. As we’ve seen before, it will affect the way we engage with people and our surroundings—for better or for worse. 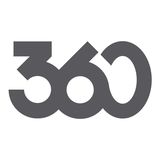