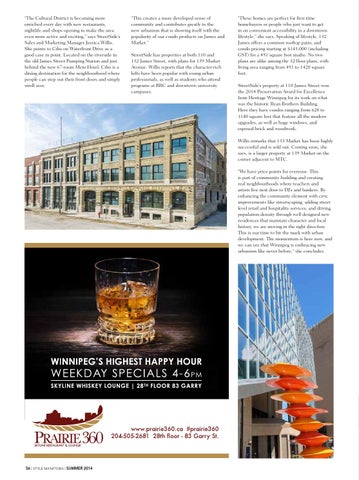 “The Cultural District is becoming more enriched every day with new restaurants, nightlife and shops opening to make the area even more active and exciting,” says StreetSide’s Sales and Marketing Manager Jessica Willis. She points to Cibo on Waterfront Drive as a good case in point. Located on the riverside in the old James Street Pumping Station and just behind the new 67-room Mere Hotel, Cibo is a dining destination for the neighbourhood where people can step out their front doors and simply stroll over.

“This creates a more developed sense of community and contributes greatly to the new urbanism that is showing itself with the popularity of our condo products on James and Market.” StreetSide has properties at both 110 and 132 James Street, with plans for 139 Market Avenue. Willis reports that the character-rich lofts have been popular with young urban professionals, as well as students who attend programs at RRC and downtown university campuses.

“These homes are perfect for first time homebuyers or people who just want to get in on convenient accessibility to a downtown lifestyle,” she says. Speaking of lifestyle, 132 James offers a common rooftop patio, and condo pricing starting at $143,000 (including GST) for a 451 square foot studio. No two plans are alike among the 32 floor plans, with living area ranging from 451 to 1420 square feet.   StreetSide’s property at 110 James Street won the 2014 Preservation Award for Excellence from Heritage Winnipeg for its work on what was the historic Ryan Brothers Building. Here they have condos ranging from 628 to 1140 square feet that feature all the modern upgrades, as well as huge windows, and exposed brick and woodwork.   Willis remarks that 133 Market has been highly successful and is sold out. Coming soon, she says, is a larger property at 139 Market on the corner adjacent to MTC. “We have price points for everyone. This is part of community building and creating real neighbourhoods where teachers and artists live next door to DJ’s and bankers. By enhancing the community element with civic improvements like streetscaping, adding street level retail and hospitality services, and driving population density through well designed new residences that maintain character and local history, we are moving in the right direction. This is our time to hit the mark with urban development. The momentum is here now, and we can see that Winnipeg is embracing new urbanism like never before,” she concludes.